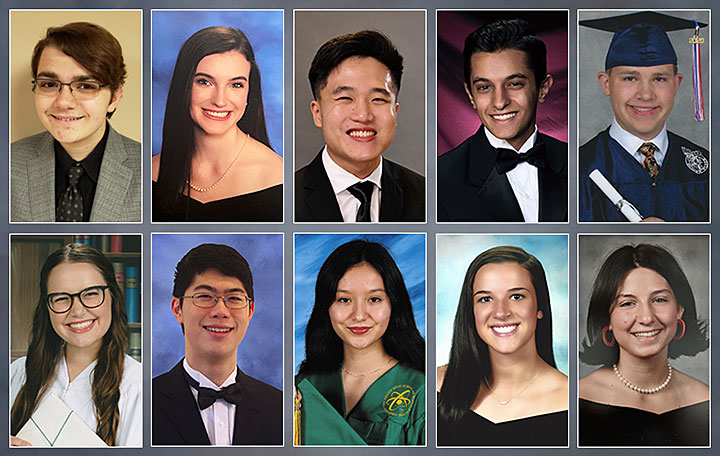 Brookhaven Science Associates (BSA), the organization that manages Brookhaven Lab for the U.S. Department of Energy through a partnership between Battelle and Stony Brook University, has announced the 2020 BSA Scholarship awardees. These annual scholarships are awarded to children of employees and retirees at the Lab—a longstanding tradition that began at Brookhaven in 1965.

Ron Townsend—BSA Board Chair and Battelle's Executive Vice President for Global Laboratory Operations—said, "The world has many challenges that need solving. That's particularly clear while we're in a global pandemic. By pursuing higher education, these students are preparing to be among the people that find answers and create solutions. BSA is proud to contribute for each of them to reach their full potential."

Brookhaven Lab Director and BSA President Doon Gibbs said, "BSA is honored to recognize these remarkable students as they take the next steps toward college and the future. These awardees have achieved a great deal and have much to be excited about. Congratulations to them and their families."

"BSA is honored to recognize these remarkable students as they take the next steps toward college and the future. These awardees have achieved a great deal and have much to be excited about. Congratulations to them and their families."

Each BSA scholar is a high school senior who will receive $2,500 per year for up to four years of study at the college or university of his or her choice. BSA scholars who are admitted and enroll as full-time students at Stony Brook University in the fall of 2020 will receive a matching scholarship from the university.

The 2020 BSA Scholarship awardees are:

Nicholas Aloi, who lives in Port Jefferson Station and will graduate from Comsewogue High School, is the son of John Aloi in the Nonproliferation & National Security Department. Nicholas will attend Stony Brook University, major in computer science, and is working toward a career in software development.

Maille Bowerman—daughter of Linda Bowerman of the Environment, Biology, Nuclear Science & Nonproliferation Directorate and Biays Bowerman of the Nonproliferation & National Security Department—lives in Mastic Beach and attends William Floyd High School. She will double major in public policy and chemistry at the University of Virginia to pursue a career in policy consulting.

Joshua Cai lives in Mount Sinai, attends Robert M. Grable Jr. Mount Sinai High School, and is the son of Yong Cai at the National Synchrotron Light Source II. He will pursue dual degrees, in applied math at Harvard University and viola performance at the New England Conservatory of Music.

Robert Caradonna of Oakdale is a senior at Connetquot High School and the son of Peggy Caradonna, who works in the Facilities & Operations Directorate. Robert plans to major in electrical and computer engineering at Stony Brook University.

Larry Davis Jr. lives in Miller Place and attends Miller Place High School. His mother, Carol Davis, worked in the Occupational Medicine Clinic. Larry will attend Columbia University to major in biomedical engineering for a career in that field. While at Columbia, he will also minor in music.

Kay Horak is the daughter of Bill Horak of the Environment, Biology, Nuclear Science & Nonproliferation Directorate. She lives in Quogue and will graduate as the valedictorian for Westhampton Beach High School. She will attend Smith College.

Keene Lu, who lives in Stony Brook and attends Ward Melville High School, is the son of Ming Lu of the Center for Functional Nanomaterials. He will attend New York University to study computer science and math.

Suzune Montag of Little Neck, Queens, attends the Bronx High School of Science and is the daughter of Christoph Montag, who is working on the Electron-Ion Collider. She will major in biomedical sciences and minor in drama at Tufts University, intending to later go to medical school and become a dermatologist.

Emma Remien, a senior at Patchogue-Medford High who lives in East Patchogue, is the daughter of Jason Remien of the Environmental Protection Division. She will attend the University of Michigan to major in engineering.

Lily Stein, daughter of Aaron Stein of the Center for Functional Nanomaterials, lives in Huntington Station and attends Huntington High School. Lily will attend the Honors College at the University at Buffalo. She will major in math and economics for a career as an economist.