Getting More From Less: Correlated Single-Crystal Spectroscopy and X-ray Crystallography at the NSLS 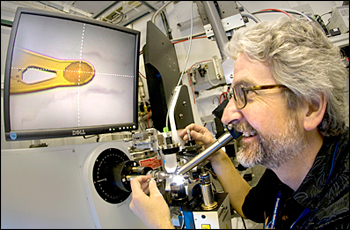 Researchers can use many different tools and techniques to study atomic structure and electronic structure to provide insights into chemistry.

Now, researchers at BNL’s National Synchrotron Light Source (NSLS) are using a new beamline that integrates three different techniques to collect complementary data revealing relationships that may lead to new cures for diseases and new fuels to power our cars and homes.

On Wednesday, April 21, join Allen Orville of the Biology Department for the 456th Brookhaven Lecture, titled “Getting More From Less: Correlated Single-Crystal Spectroscopy and X-ray Crystallography at the NSLS.” All are invited to attend this free talk, which is open to the public and will be held in Berkner Hall at 4 p.m. Refreshments will be offered before and after the lecture. Visitors to the Lab ages 16 and older must carry a photo ID while on site.

During his talk, Orville will discuss protein crystallography and highlight some of the field’s landmark discoveries. He will then explain how integrating several techniques enables new ways to study chemical reactions and biological processes at NSLS and share a vision for the future at NSLS-II.

Orville earned a bachelor’s degree in biology from the University of Minnesota in 1983 and continued to work at the university as a scientist and manager of the liquid helium electron paramagnetic resonance facility before earning a Ph.D. in biochemistry there in 1997. He then worked as a postdoc with the Howard Hughes Medical Institute at the University of Oregon from 1997 until 2000. From 2000 through 2006, Orville was an assistant professor at the Georgia Institute of Technology. He joined Biology as an associate biophysicist in 2006 and was promoted to biophysicist in 2008.