The following article was written by Brookhaven National Laboratory Director Doon Gibbs and Thomas Jefferson National Accelerator Facility Director Stuart Henderson for the Innovation News Network and will appear in an upcoming print edition of The Innovation Platform, a journal that covers advances in scientific discovery and the important supporting frameworks that drive science forward.

The Electron-Ion Collider – A New Frontier in Nuclear Physics

Doon Gibbs, Director of the Brookhaven National Laboratory, and Stuart Henderson, Director of the Thomas Jefferson National Accelerator Facility, discuss the Electron-Ion Collider – a one-of-a-kind future research facility that will peer into the building blocks of visible matter and unlock the secrets of the strongest force in nature. 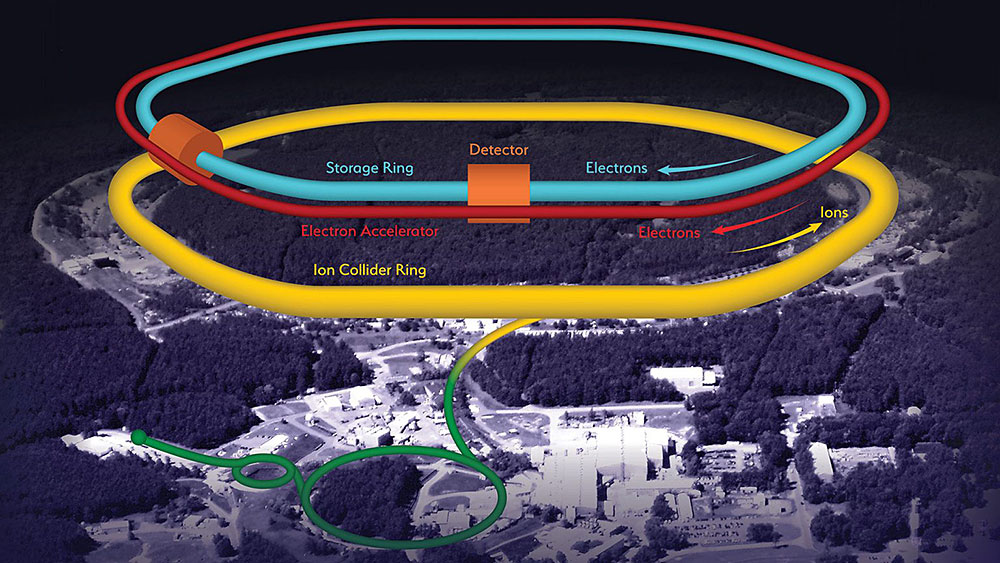 New Electron-Ion Collider (EIC) components (including an electron accelerator, red, and electron storage ring, blue) will fit inside the tunnel that currently houses the Relativistic Heavy Ion Collider (RHIC, yellow). The EIC will reuse one of RHIC's two ion storage rings for collisions of electrons with ions, and track those collisions with one or more detectors.

Science has always been about understanding the world around and within us. At the US Department of Energy’s national laboratories, we take that search for knowledge and the application of what we learn in many directions—from examining the electronic structure of materials for designing better batteries, to searching for drugs that might thwart the deadly coronavirus; from producing new isotopes for treating cancer, to modelling the evolution of the cosmos. Within the next decade, we will be embarking on an exciting new journey into an unexplored frontier in nuclear physics—deep into the particles that make up the nuclei of atoms.

Scientists at our two institutions — Brookhaven National Laboratory and Thomas Jefferson National Accelerator Facility (Jefferson Lab)—together with researchers at other national labs and universities throughout the US, will join forces with partners from around the world to build the world’s first polarised Electron-Ion Collider. Supported by ~US$1.6-2.6 billion in funding from the US Department of Energy’s Office of Science and $100m from New York State, this new world-class research facility will collide high energy electrons with protons and the nuclei of heavier atoms such as gold to produce precision 3D snapshots of quarks and gluons – the building blocks of all visible matter – and unlock the secrets of the strongest force in Nature.

This journey will pick up on the exploration of the proton, nuclei, and nuclear matter that has been underway for more than two decades at our two institutions.  Since 2000, scientists have used Brookhaven’s Relativistic Heavy Ion Collider (RHIC) to explore the characteristics of nuclear matter, discovering unexpected details about what matter was like in the very early Universe. We will even reuse some of that facility’s still ground-breaking accelerator components and draw on the expertise gained while vastly expanding its capabilities over the past 20 years. Likewise, since 1995, scientists have used Jefferson Lab’s Continuous Electron Beam Accelerator Facility (CEBAF) to discover new details of the quark structure of protons, neutrons, and nuclei.

Building on these discoveries, the Electron-Ion Collider will extend our knowledge and technological capabilities in completely new ways, with wide-ranging impacts in nuclear physics and beyond. 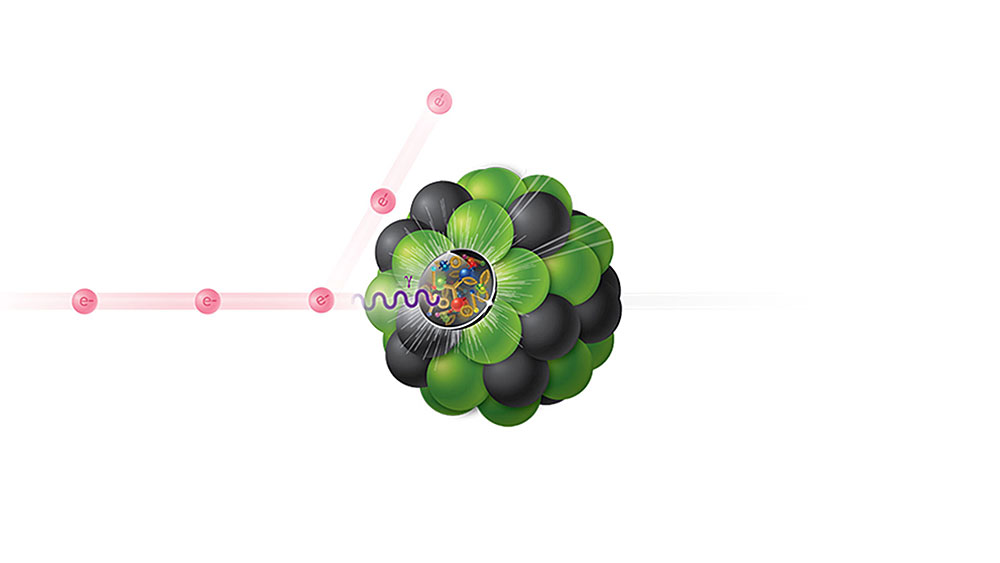 Electron-Ion Collision – as electrons collide with ions at the Electron-Ion Collider (EIC), they will scatter off the quarks within the proton or nucleus. Particles ejected from the collision by these scattering interactions strike various components of a detector. Scientists study the patterns and characteristics of the particles produced to tease out the internal structure of the protons and ions, including the distribution of the quarks and gluons.

The microcosm within protons

The Electron-Ion Collider will be a 3D ‘microscope’ for studying the quarks and gluons that are the building blocks of protons, neutrons, and nuclei – in other words, all visible matter. Gluons are the subatomic particles that bind quarks into the more familiar particles that make up matter in today’s world. Without gluons, space itself would be unstable, and atoms – and everything made from them, including stars, planets, and people – would not exist.

Nuclear physicists estimate that gluons (which themselves are massless) and the force they mediate among quarks may account for nearly 99% of the mass of the protons and neutrons that make up atomic nuclei – the most massive component of all visible matter in the Universe. Yet, we know less about gluons than the Higgs particle, which accounts only for the masses of quarks and electrons. An Electron-Ion Collider promises unforeseen insight into gluons’ mass-building mechanism.

Collisions at the Electron-Ion Collider will reveal how quarks and gluons are arranged within the larger building blocks of matter, the protons, neutrons, and nuclei. Experiments will search for signs of a new state of matter that theorists predict will emerge as gluons multiply and reach a state of saturation at high energies. Additional experiments will explore whether the presence of multiple protons affects the distribution of gluons within these particles, as it does the distribution of quarks.

Exploring the binding force carried by gluons – the strongest force in Nature – will also help physicists unlock the secrets of confinement, the property that keeps quarks locked within composite particles. This research will offer insight into gluons’ behaviour not just in ordinary matter, but also in extreme astrophysical environments such as the hearts of merging neutron stars and supernovae.

In addition, the ability to control the polarisation of colliding electrons and protons in the Electron-Ion Collider will give physicists the tool they need to finally solve a long-standing physics mystery: the origin of proton spin. Though proton spin, an intrinsic angular momentum that is somewhat analogous to the spin of a toy spinning top, is used in nuclear magnetic resonance imaging (NMR and MRI), scientists still don’t know how this property arises from the proton’s inner building blocks. Precision measurements at the Electron-Ion Collider will reveal contributions made by quarks, gluons, and a sea of quark-antiquark pairs to place the final pieces in the proton spin puzzle together. 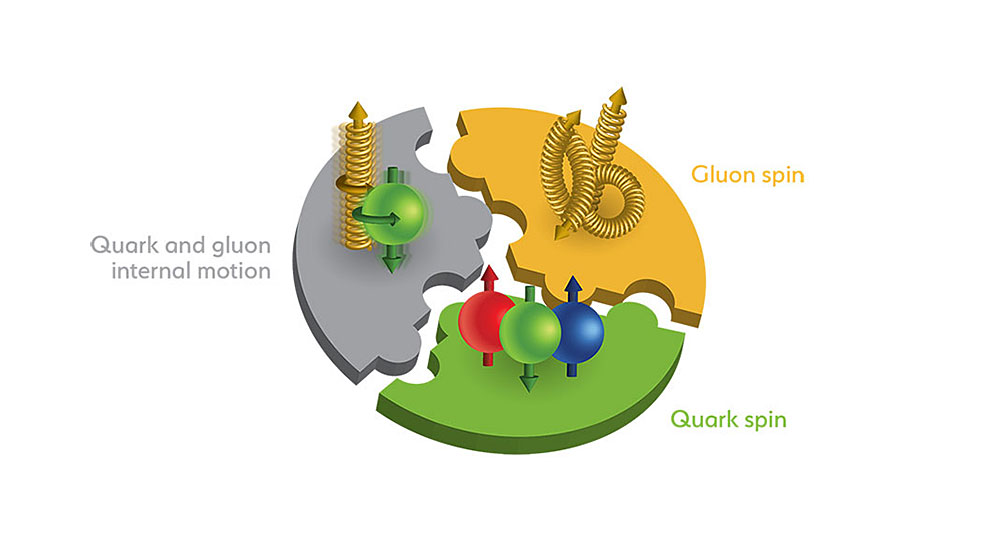 The Spin Puzzle – the Electron-Ion Collider (EIC) will be the world's first polarised electron-proton collider – meaning the 'spins' of both colliding particles can be aligned in a controlled way. This will make it possible to experimentally solve the outstanding mystery of how the teeming quarks and gluons inside the proton combine their spins to generate the overall spin carried by the proton.

How will we use the knowledge gained at the Electron-Ion Collider? As is the case when entering any new frontier, it is difficult to predict. But it might be helpful to think about how experiments of the last century have impacted us today.

These include fundamental physics experiments conducted 50-100 years ago that revealed the structure of the atom – a positively charged nucleus surrounded by negatively charged orbiting electrons. Those experiments laid the foundation for the theory of quantum mechanics and the design of a wide variety of materials and technologies that drive our economy today – batteries, smart materials, and all our electronics.

By allowing us to peer inside the nucleus and individual protons, the Electron-Ion Collider will broaden our understanding of the microcosm of quarks and gluons within. We already know that the nuclear strong force through which those fundamental particles interact is considerably more powerful than the electromagnetic interactions described by the theory of quantum mechanics. Unlocking the secrets of the nuclear strong force and solidifying our understanding of its descriptive theory – quantum chromodynamics – may open doors to powering the discoveries and technologies of tomorrow.

And along the way we will be working with experts from around the world to develop many advanced technologies that will make this exploration possible – and that will undoubtedly advance other areas of science and help to address pressing societal needs.

As one example, we have been working with partners at Cornell University and the New York State Energy Research and Development Authority on innovative particle acceleration schemes that recycle both the particles and their energy. This energy-saving technology has great potential for use in a system that will keep the Electron-Ion Collider’s beams of colliding ions cool and tightly packed. Keeping ion beams cool will maximise collision rates, or luminosity, and will generate more data for physicists to explore. And the energy-saving acceleration approach could go on to be applied at other future accelerators used in science or for industrial and medical applications, including cancer treatment.

We are also working with a worldwide community of Electron-Ion Collider scientists – already more than 1,000 physicists from over 200 laboratories and universities throughout the nation and around the world – to gather input on the scientific opportunities at an Electron-Ion Collider, as well as the detector and accelerator capabilities needed to ensure that the Electron-Ion Collider will make the most impactful measurements and get the most out of every particle interaction. 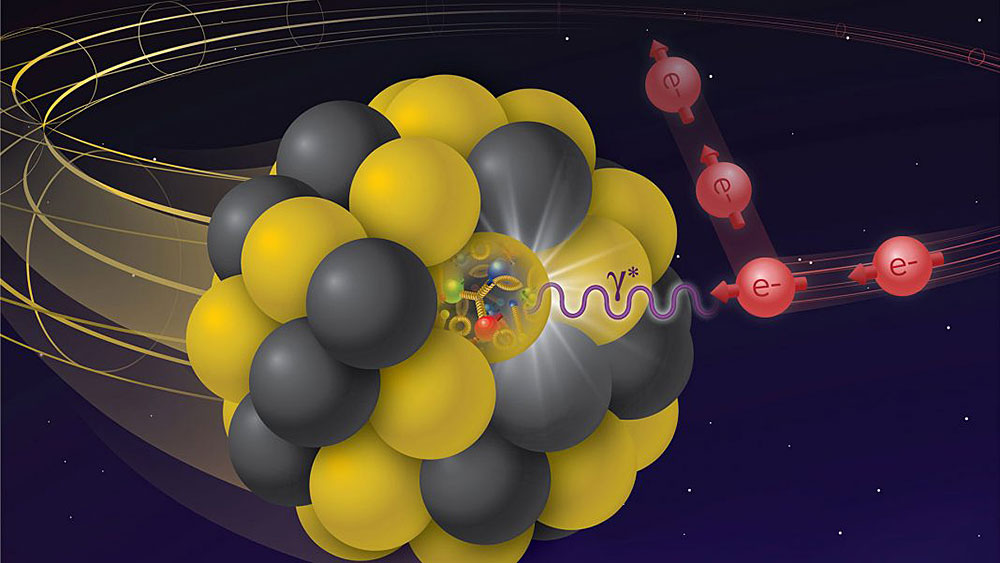 EIC Collision – as electrons collide with ions at the Electron-Ion Collider (EIC), virtual photons – particles of light that mediate the interaction, denoted by the wavy purple line – will penetrate the proton or nucleus to tease out the structure of the quarks and gluons within.

Important impacts in physics and beyond

The technologies being developed for the Electron-Ion Collider will push the evolution of accelerator and detector components, as well as architectures and approaches for handling Big Data, in ways that will have broad benefits for science and society.

For example, advanced accelerator designs could improve the delivery of particle beams with cell-killing energy directly to tumours, with lower cost and better outcomes than today’s radiotherapies. These accelerator technologies could also find their way into machines used by scientists and industry to make and test computer chips; explore and develop new materials for batteries, solar cells, and other energy applications; and to study bacterial and viral proteins and design drugs and vaccines to protect human health. Detectors developed for tracking particles at the Electron-Ion Collider may lead to better ways to identify illicit cargo and support other national security applications.

Advances in any of these areas – from drug development to materials design to understanding global challenges such as pandemics and climate change – rely increasingly on computational resources that allow scientists to sort through unprecedented volumes of data. The computational resources and techniques developed to extract elusive signals from billions of Electron-Ion Collider particle interactions will inevitably drive the evolution of more powerful tools for tackling these other data-intensive challenges.

Running the Electron-Ion Collider will also facilitate continued operations of two Brookhaven Lab facilities that employ the same accelerator infrastructure: one that develops and produces crucial isotopes used by doctors to diagnose and treat cancer; and one that simulates the effects of space radiation, which was designed to help protect future astronauts and also advances scientists’ understanding of cancer mechanisms, treatments, and potential protective measures.

And, of course, the prospect of entering a new frontier will attract the best and brightest minds from around the world. The Electron-Ion Collider will offer countless opportunities for training a highly skilled workforce – the scientists, engineers, and tech-savvy workers who will drive tomorrow’s technological and economic advances and maintain our leadership in these essential areas for decades to come.

We are looking forward to this journey and to sharing the discoveries and other benefits with our nation and the world.