The world’s highest-intensity neutrino beam will start in Illinois and head straight through the earth all the way to South Dakota. What does that have to do with Brookhaven National Lab on Long Island? 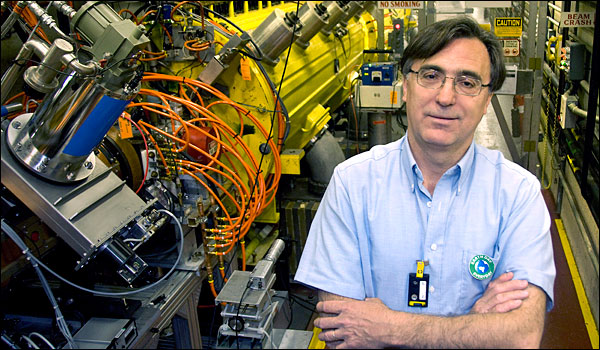 Nick Simos at the BLIP beamline

Here’s the story: The neutrino beam will be produced at Fermi National Accelerator Laboratory (Fermilab) and sent more than 1,000 kilometers to be measured by detectors for the Long Baseline Neutrino Experiment (LBNE) at the proposed Deep Underground Science and Engineering Laboratory in South Dakota, a project funded by the Department of Energy Office of Science. From these measurements, scientists hope to learn more about the three known types of neutrinos and how they oscillate, or change from one type to the other.

To create the extraordinarily high-intensity beam of neutrinos, scientists propose bombarding a very durable target with bunches of highly energetic protons under extreme conditions. For the past several months, scientists at BNL have been conducting experiments on potential materials for producing neutrinos. The Brookhaven Linac Isotope Producer (BLIP), primarily used to produce medical isotopes, can recreate the anticipated conditions and consequently the effects that can be expected on the target. By assessing an array of target materials, scientists can see which are best at producing neutrino beams and establish their useful operational life, which will help ensure that no unexpected failure of the target will interrupt beam production.

The BLIP facility and the BNL Linac proton beam parameters were the natural choice for this experiment because at their beam energies (100 to 200 million-electron-volts or MeV), the effects on materials is accelerated, compared to the much higher 120 billion-electron-volt (GeV) energy at the LBNE experiment. These “accelerated” effects will enable lifetime assessment of the materials under study.

Teams from BNL and Fermilab have been working together to design and execute the BLIP experiment using the 180-MeV Linac beam, which started on March 18 and ran until the end of the cycle at the end of May. At BNL, Nick Simos is coordinating the BLIP experiment. Harold Kirk, a co-PI in the project, Hans Ludewig, and Nicholas Souchlas, a post-doc on the experiment, have been providing scientific and technical expertise. The BLIP staff, headed by Leonard Mausner, has been providing technical and operational expertise especially in guiding the design of the experiment and in particular the integration of the LBNE target study with the BLIP medical isotope producing operation. The Fermilab team is headed by Vaia Papadimitriou (LBNE Neutrino Beam Manager) and coordinated by Patrick Hurh. Scientists and engineers include Jim Hylen, Bob Zwaska, Nikolai Mokhov and Joel Misek.

While neutrinos are among the most abundant particles in the universe, they rarely interact with other matter. They are often described as “ghost” particles, and in many ways, they are just as mysterious. While several billion neutrinos pass will cross your open palm every second, extremely rarely will one of them interact with an atom in your hand. Neutrinos are produced in nuclear reactions such as are found in the sun and other stars, but much about them is still unknown. They rain down on each square inch of the earth at the rate of about 400 billion per second. In the 1950s, a Brookhaven team headed by Raymond Davis Jr. started investigating neutrinos produced in Brookhaven's Graphite Research Reactor and at a reactor at the Savannah River Plant in South Carolina. But these experiments were really the prelude to Davis’s major triumph, which came in the early 1970s, when he successfully detected solar neutrinos in a new experiment based in Lead, South Dakota. Davis's experiment confirmed that the sun produces neutrinos, but only about one-third of the number of neutrinos predicted by theory could be detected. This so-called "solar neutrino puzzle" gave birth to other experiments by scientists around the world, all working to confirm the solar neutrino deficit, and resolved by experiments at the Sudbury Neutrino Observatory in Canada which proved that neutrinos oscillate as they travel from the sun.

How The Experiment Works

In the present LBNE experiment to study oscillation, magnetic lenses at Fermilab will smash protons onto a target to liberate pion and kaon particles and direct them into a long tunnel pointing towards the deep underground mine in South Dakota. The pions and kaons will decay into intense muon neutrino beams that will travel through the tunnel. As they travel, they will “oscillate” and arrive at the detectors in the mine as a mixture of all three types of neutrinos -- electron neutrinos, muon neutrinos and tau neutrinos. The detectors will sense any interaction with matter as the beams travel through the earth, as well as the transformations between the different neutrino “flavors.”

For some of the materials considered as targets, primarily graphite, reference data from nuclear reactor operations exist. Thresholds have been observed on materials bombarded by smaller fluxes of protons while the same materials have lasted much longer in reactors. Scientists will observe how the limit changes between materials within the same family. Based on that, the team will select the optimum material with the longest anticipated life under beam. To observe environment effects, researchers have simulated different conditions under the beam at BLIP, including cooling water, vacuum and argon gas environments.

By exposing samples of the target material class (different graphite grades, carbon fiber composites and hexagonal Boron Nitride) to proton fluxes past thresholds that have been observed in the past, researchers will be able to identify those material structures that have the most resistance to irradiation damage. They will study the changes that occur in the material structures as a result of proton bombardment. The biggest challenge comes afterwards in the post-irradiation research and assessment where the effects of intense irradiation are to be quantified through a series of precise measurements on changes in physical and mechanical properties of the target materials.

Simos pointed out that in addition to envisioning the target material experiment and conducting the studies that precede it, the team had to work closely with BLIP scientists to integrate assessing the performance of a half dozen materials into the existing operations at BLIP.

“With the proposed multi-megawatt experiments such as the LBNE, we are pushing materials to their limits and beyond,” Simos said. “Recent studies at BLIP have confirmed the shortcomings of several materials. Material irradiation studies such as the one taking place at BLIP, which replicate the conditions anticipated in the actual LBNE experiment, are crucial to identify those materials that have the greatest chance of survivability and longevity in generating neutrinos.”