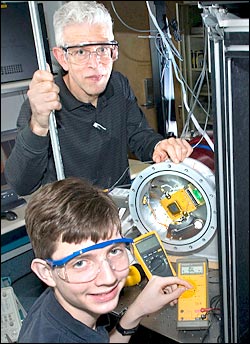 David Lawrence with Paul O’Connor of the Instrumentation Division

Graduation and summer vacation may only be days away for David Lawrence, a senior at Comsewogue High School, but he doesn’t only have barbeques and going off to MIT on his mind. He is also helping develop components for the Large Synoptic Survey Telescope (LSST), an under-construction telescope being built with the world’s largest digital camera — a 3,200-megapixel sensor — that will scan the far reaches of deep space tracing billions of galaxies never seen before.

In 2008, at the age of 15, Lawrence joined Brookhaven National Laboratory’s (BNL) High School Research Program (HSRP) and the collaboration of U.S. national laboratories, universities, and other institutions around the world working to design and build the LSST. The HSRP is managed by the Lab’s Office of Educational Programs and pairs bright, science-minded high school students like Lawrence with top scientists at BNL to complete scientific research projects.

Lawrence has worked with mentors Paul O’Connor and Peter Takacs, both of BNL’s Instrumentation Division, on several different aspects of LSST-related projects during the past three years.

“I first met David because he was on a competitive mathematics team with my daughter,” explained O’Connor. “We are very glad that we brought him on to our team — our work on this project has benefitted tremendously.”

Many high school students, like David Lawrence, come to BNL through OEP’s High School Research Program. This six-week program gives 11th and 12th grade students the opportunity to work with BNL scientists and participate in ongoing, important research and development programs. Their mentors consistently note the valuable contributions made by these young researchers. While being an Intel finalist or semifinalist is not the focus, it does happen frequently for these high-caliber students.

Using the open-source computer programming language Python, Lawrence has created new mathematical ways to test the flatness of LSST sensor prototypes, within ranges smaller than a millionth of a meter. He has also developed new mathematical techniques for comprehensive study of charge diffusion for the LSST sensors, which occurs when light hitting a sensor is converted to a digital signal. This can lead to blurry, unfocused images — exactly what the LSST collaboration does not want.

“It’s really neat to write computer code, set up test equipment, and then see it all in action,” said Lawrence.

Not only is it neat, but also Lawrence’s work through Brookhaven Lab’s HSRP has earned him several honors. Earlier in 2010, he was named a semifinalist in the Intel Science Talent Search contest, and he took first place in the Physics category at the 2010 Long Island Science and Engineering Fair. Lawrence was also asked to present his innovative math techniques at an all-hands meeting for the LSST camera group in Philadelphia last March.

High school graduation is only days away for Lawrence and he will continue to work on LSST sensors at the Instrumentation Division throughout the summer. He is not sure whether he will major in mathematics or computer science when he arrives at MIT this fall, but either way, he’s capable of reaching those unseen stars that the LSST will first “see” using the sensors he helped develop.