This news release, originally issued by ANSTO, describes a novel x-ray technique that revealed new structural details about the specific arrangement of atoms in a special type of polymers. Guillaume Freychet, a beamline scientist at the National Synchrotron Light Source II (NSLS-II) and the lead author of the study, led the development of the new technique at the Soft Matter Interfaces (SMI) beamline and performed the x-ray measurements on the polymer samples using the SMI beamline at NSLS-II. NSLS-II is a U.S. Department of Energy (DOE) Office of Science User Facility located at DOE’s Brookhaven National Laboratory that offers a comprehensive suite of scattering and diffraction beamlines for research on new materials. For more information on Brookhaven’s role in this research, please contact: Cara Laasch, 631-344-8458, laasch@bnl.gov .

Advanced X-ray techniques have revealed new structural details about the specific arrangement of atoms in conjugated polymers, an important class of materials that are used in LEDs, organic solar cells, transistors, sensors and thermoelectric power devices.

Conjugated polymers are organic macromolecules with an unusual electronic structure, a backbone with alternating single and double bonds, which produces interesting, useful optical and electrical properties.

Because of a level of disorder in the arrangement of atoms in conjugated polymers, the use of direct methods, such as conventional X-ray diffraction, reveals only limited information.

Researchers from Monash University led by Prof Christopher McNeill, in association with American collaborators at Brookhaven National Laboratory, have demonstrated that resonant X-ray diffraction performed at X-ray energies that resonate with sulphur atoms in the polymer can discriminate between different types of packing structures in conjugated polymers. 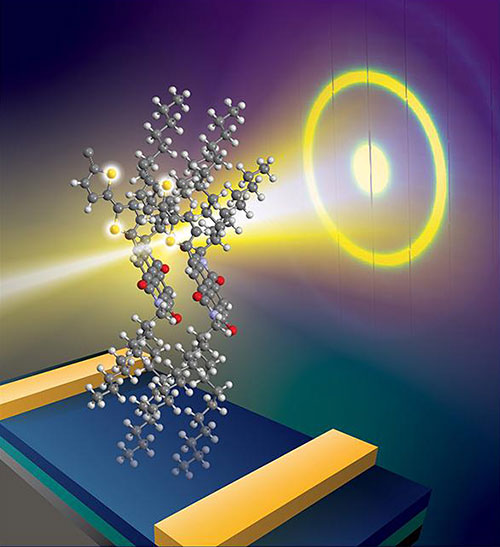 The research was published in the Journal of the American Chemical Society and earned an inside back cover of the publication.

Thomsen has collaborated on the structural investigation of conjugated polymers using synchrotron techniques with McNeill, Professor of Materials Science and Engineering at Monash University for many years.

The resonant diffraction measurements were undertaken at NSLS-II at Brookhaven National Lab in the United States by first author Guillaume Freychet.

“Conjugated polymers have a ring structure, like benzene, with orbitals coming out above and below the rings. The electrons move through the orbitals," explained Thomsen.

“If you have a device that has a couple of electrodes on either side and a conjugated polymer layer in between, you want all the polymers orientated in the same direction, so the electrons can move through freely from one electrode to the other,” he added.

“NEXAFS can give you the information about the alignment of the polymers with respect to the surface,” he said.

“When using organic polymers in a device, it is important to align the molecules in a certain way to get the best performance,” explained Thomsen.

Thomsen said the energy range for the experiment was a little beyond what is usually used on the instrument, but they were able to acquire data with good results.

Elliot Gann of The National Institute of Standards and Technology in the United States, who previously worked at the Australian Synchrotron, also contributed to the research.

Thomsen said a new Medium energy X-ray absorption spectroscopy beamline under construction at the Australian Synchrotron as part of Project bright, will be ideally suited for these experiments in the future.