Vaibhavi Gawas, an undergraduate at the Indian Institute of Technology in Madras, conducts simulations of Electron-Ion Collider (EIC) interactions as a member of EIC's software working group in India.

What is your role in the Electron-Ion Collider (EIC) project?

In August 2020, when I was taking a high-energy physics course under Dr. Prabhat Pujahari, he informed me about this opportunity to work as part of a new EIC team, and I excitedly signed up for it. I am part of EIC's software working group in India. My role is to generate and validate data produced using various simulation methods, including Monte-Carlo simulations, and compare these datasets with previous electron-proton scattering data from the HERA experiment. These comparisons will help us make predictions about what scientists will see in collisions at the EIC and guide the development of tools we’ll need to analyze EIC data.

EIC's aim to look into the nature of quarks and gluons—the fundamental building blocks of protons and neutrons—and the physics of nucleon and nuclear structure makes it a super-important facility. It will ultimately put physicists steps ahead toward discovering the not-well-understood but essential aspects of these particles and how they pertain to nuclear and particle physics more broadly. 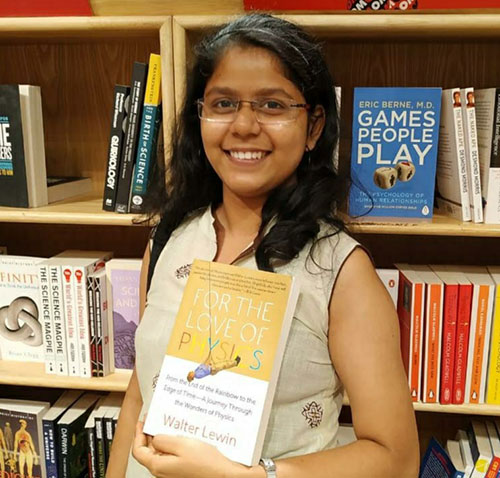 What is the biggest software or data challenge you face in your EIC research?

The biggest challenge I’ve faced so far was to initially figure out how different MC-generators work, and how to specify code inputs for each one. Even though the EIC User Group conducted tutorial sessions, working on these software frameworks remotely and sorting out code bugs specific to my own computer system was quite a challenge.

The simple idea of simulating particle collisions on a computer is so fascinating to me. I cannot wait to discern a lot more about the backend work related to such simulations! It's just the sheer learning process that excites me the most!

The most prominent thing on my desktop is the ability to access IIT Madras's Aqua Supercluster supercomputer and run over a million collision events within a span of a few seconds!

The day usually starts with regular undergraduate classes. During the afternoon and evening slots, I would either be completing some assignments or working on EIC simulations.

Days are usually packed with coursework, although I try to participate in several activities of the Physics and Astronomy club at my institute. I also love reading fantasy novels, random nature walks/hikes, and all kinds of sport activities during my free time.