Scientists develop powerful tools to study the growth of nanostructures 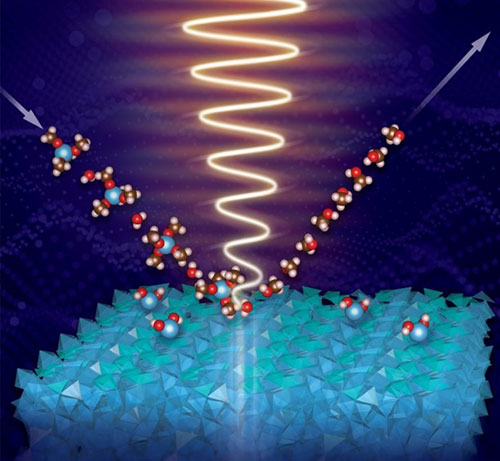 Scientists discovered a new mechanism for how titanium oxide thin films grow on complex, 3D nanoarchitectures and developed data analysis tools to deduce a new way to describe the growth.

The in situ, x-ray spectroscopy techniques and data analytics methodologies developed in this work are a powerful toolset for understanding and improving vapor-phase film growth, with benefits for microelectronics, catalysis, and solar energy.

From microelectronics to solar panels many modern devices include components that are made out of thin layers of special materials. These layers of materials, or thin films, are usually grown through a process called vapor deposition. One unique type of vapor deposition is atomic layer deposition, a process in which the layers are grown atom by atom. Atomic layer deposition offers the following advantages: films that grow more uniformly even on uneven surfaces and a process that can be controlled very precisely. However, scientists still struggle to fully describe and fine-tune the process.

?In this work, a team of scientists developed data analytics methodologies for continuous, in situ x-ray spectroscopy measurements during thin film growth. The team demonstrated that they could collect data throughout the whole growth process of titania on zinc oxide nanowires. They discovered three different stages during the growth process: a prenucleation stage, a transition region, and steady state growth. They could also identify characteristic spectral signatures of the bulk film as well as reveal the evolution of titanium on the growth surface.

The scientists used the Beamline for Materials Measurement (BMM) and the Inner-Shell Spectroscopy (ISS) beamline at the National Synchrotron Light Source II (NSLS-II) for their x-ray absorption measurements. As a Department of Energy (DOE) Office of Science User facility located at DOE’ Brookhaven National Laboratory, NSLS-II offers a wide range of materials research tools such the BMM and ISS beamlines.

The in situ hard x-ray spectroscopy technique and data analytic methodology developed in this work offer a new and powerful toolset that is broadly adaptable for deciphering the structural evolution in a variety of atomic layer deposition and vapor deposition processes.

This research was carried out at Brookhaven National Laboratory (BNL) under Contract No. DE-SC0012704 where facilities used included those of the Center for Functional Nanomaterials (CFN) and 8-ID ISS (Inner Shell Spectroscopy) and 6-BM (BMM) beamlines in the National Synchrotron Light Source II, U.S. Department of Energy Office of Science User Facilities. This work used the computational resource of the Scientific Data and Computing Center, a component of the Computational Science Initiative at BNL. R. S. Li is supported by BNL LDRD Project No. 19-008.