With hurricane season upon us, some members of the Amateur Radio Club at BNL are more than prepared for strong winds, heavy rain, and electrical blackouts. These amateur radio operators are also on call to report severe conditions to the National Weather Service. 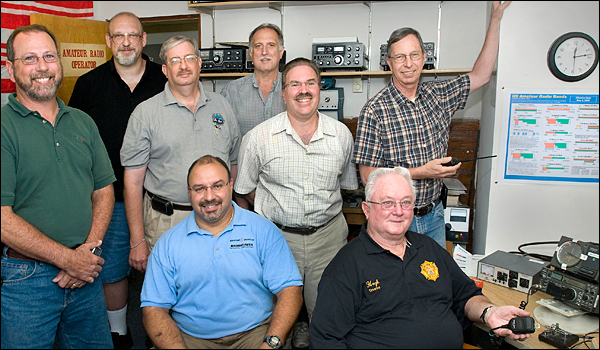 Gary Stevens works in Brookhaven Lab’s Information Technology Division and is one of several Amateur Radio Club members who participate in the National Weather Service’s SKYWARN program. Across the country, there are nearly 290,000 amateur radio operators — commonly referred to as “hams” — who volunteer their expertise and equipment to report severe storm conditions through the SKYWARN program. The reports from these spotters provide added insight to the National Weather Service, helping the agency in issuing tornado, flood, and other severe weather warnings to local communities.

“Doppler radars can only see so much, so the National Weather Service also relies on us to report what we see from the ground,” said Stevens, who is on the lookout for waterspouts, wall clouds, strong wind gusts, and hail when severe weather is forecast for Long Island.

Stevens realized the importance of amateur radio not during a weather emergency, but during the attacks on September 11, 2001.

“Amateur radio is extremely reliable during emergencies,” he explained. “It was the only way to communicate for some time on 9/11.”

Hams communicate with each other using radio frequencies that regular car radios and home stereos do not recognize. All hams are required to be licensed. They can communicate across town or even with astronauts in the International Space Station. While some hams are only involved in amateur radio as a hobby, many are involved as a way to prepare for emergencies, and many are trained and registered to help their communities during emergencies through programs like SKYWARN or the Amateur Radio Emergency Service.

“Birds of a feather flock together,” Stevens said, explaining that most hams belong to at least one club.

At BNL, BERA’s Amateur Radio Club welcomes both experienced and inexperienced newcomers. The club maintains a signal repeater and other equipment for its members, who meet regularly in person and over the airwaves. Club members also simulate emergency operations with hams around the world during the Amateur Radio Relay League’s Field Day every June. And with Long Island’s hurricane season running from June until November, what better time to practice?