The following feature story was originally published by the University of Houston. The story describes a two-year pilot program for minority undergraduate students in physics, in which students will spend two weeks conducting research at the U.S. Department of Energy’s (DOE) Brookhaven National Laboratory. The pilot program was funded by a recent DOE award, which Brookhaven Lab was also a recipient of. In addition to collaborating with the University of Houston on its pilot program, Brookhaven is also coordinating a two-year fellowship in nuclear physics. The fellowship aims to place underrepresented undergraduate students on a path to graduate school in nuclear physics, increasing the pool of scientific excellence in the Nation.  For more information, contact Stephanie Kossman (skossman@bnl.gov, 631-344-8671)

U.S. Department of Energy awards half a million dollars 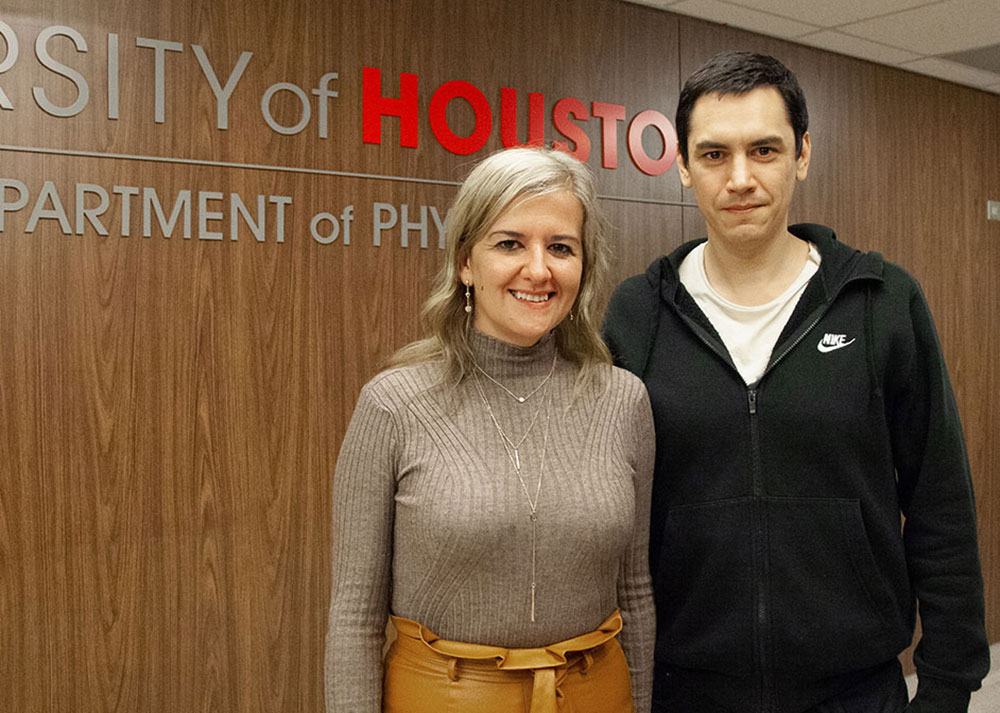 A new program for minority students interested in physics is kicking off at the University of Houston this summer. Starting June 28, nine undergraduate students will attend their first lecture as part of the Nuclear Science in Texas to Enhance and Advance Minorities, or NuSTEAM, program.

The U.S. Department of Energy’s Office of Science awarded a two-year, $500,000 grant to UH, University of Texas at El Paso, University of Texas Rio Grande Valley and Prairie View A&M University to enhance participation of Black and Hispanic students in nuclear physics and high energy physics. UH will receive $199,000, and the other three collaborating institutions will divide $301,000.

“Unfortunately, Hispanic and African American students are a very small fraction of the community of high-energy and nuclear physics,” said Claudia Ratti, associate professor of physics at UH’s College of Natural Sciences and Mathematics and principal investigator of the grant.

“The idea is to try to enhance their participation and to help them advance in these fields. This doesn’t mean that after this program they must become an academic. They will learn techniques and skills they can apply to industry and to research.”

Ratti adds that she and her co-principal investigators at UH and participating institutions will provide a set of skills under the general umbrella of nuclear and high-energy physics, which also involves computer programming and data analysis.

“I think it’s going to be a great experience,” said Israel Portillo, program coordinator and UH physics Ph.D. graduate. “Just two years ago I was a student, and now I’m going to be able to teach students lectures, serve as a role model for them.”

Following their time in Houston, students will travel to Brookhaven National Laboratory in New York for a two-week site visit. They then will conduct undergraduate research for two semesters at their home institutions and be mentored by both a local co-principal investigator and one from UH.

“The nice thing is that they get paid for the research they do,” Ratti said.

The nine students will receive a 40-hours-a-week stipend for the six weeks spent at UH and the two weeks at Brookhaven. They will be paid 15 hours a week for their two semesters of undergraduate research.

Students were chosen based on their GPA and interest in nuclear and high-energy physics. Each applicant had to submit a letter of interest.

Ratti contacted some physics undergraduates at UH, encouraging them to apply for the program, because she knew they were interested in the field. NuSTEAM shows preference for seniors so they can gain the experience in the last year of their studies.

All students this year are either Hispanic or Black.

For Ratti, applying for the grant was yet another opportunity to mentor non-traditional physics students. Coming from Italy, she said women make up a sizeable percentage of the physics community. When she went on to pursue a postdoctoral fellowship outside of Italy, she encountered a cultural shift.

“When I was a postdoc abroad, before joining the UH physics department, I was often the only woman in the group,” she said. “I was almost the only woman in the department. I felt intimidated. This was an environment where I did not feel welcome. Comparing the two experiences, it was so much nicer when I had a group of people like me around.”

That is why she is leading a program to advance minorities and increase their percentage, so they feel welcome and have role models to follow.

“The importance of role models is crucial,” she adds. “I’m happy that Israel can help, because he can be a role model for the students. They see that he was a first-generation immigrant student, and now he is teaching physics.”

At the Department of Energy’s Office of Science, NuSTEAM is specifically funded by the new Traineeship to Broaden Diversity in Nuclear Physics pilot program.