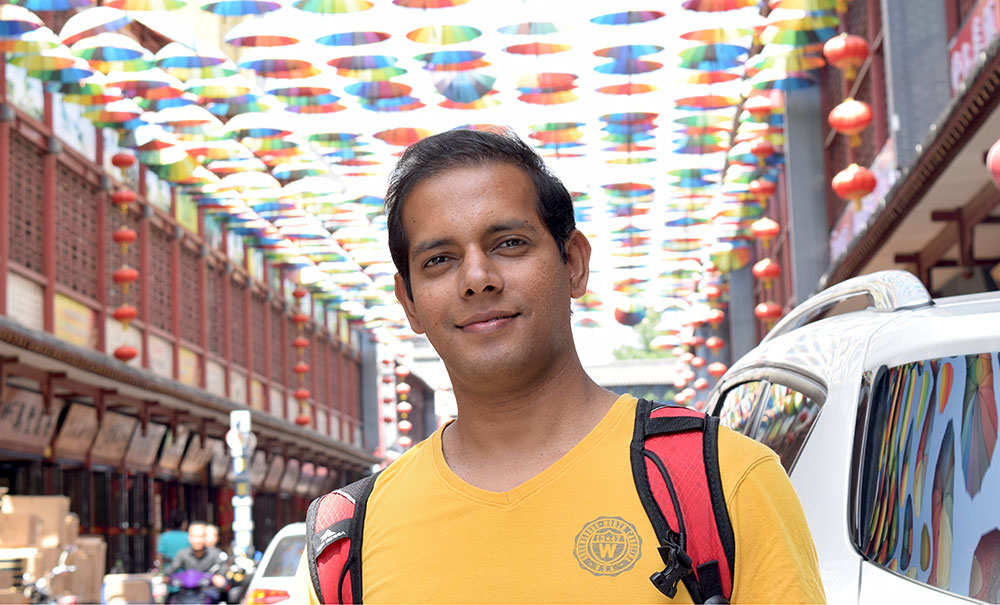 CERN’s Large Hadron Collider (LHC) has enriched our understanding of the Standard Model and the origin of mass of elementary particles by discovering the Higgs boson. But, we are far from understanding details about the universe's building blocks. I am hopeful that the physics goals of the EIC will add some more answers to fundamental questions we still have about them. For instance, we want to know more about the proton and neutron mass, spin, and internal structure. The EIC would be unique and the only facility to use polarized electron and proton/ion beams for its collisions at high energies. It will access kinematic regions in physics that have never been investigated before. This will open a new window to study the Standard Model precisely in diverse forms in these unexplored regions.

Since the EIC is in its initial phase, I am excited to contribute to its development and, at the same time, learn how a mega-science project like the EIC takes its shape. I’m looking forward to being a part of this project through all its stages, starting right at the beginning of detector research and development; being involved with the processes of designing, construction and installation; and then having a positive impact all the way through to the commissioning and data-taking stages, where we aim to achieve the final physics goals. I want to be a part of the development of the detector hardware, as well as the software development efforts—and eventually be involved with the physics data analysis when the first EIC data finally arrive.

One of the essential features of the EIC is that there is substantial research activity involving international collaborations and interactions with world-class experts in nuclear and particle physics. This exchange of knowledge and information during the various stages of the EIC project will help me prosper in my research. This experience will also allow me to understand the multiple aspects of this level of a mega-science project and help make me a better experimental particle physicist!

Artificial intelligence (AI) includes machine learning, deep learning algorithms, and AI-driven tools. AI is helping particle physicists to more efficiently and effectively accomplish tasks and achieve goals, such as searching for new physics signatures, particle identification, complex reconstruction of tracks and events, and detector simulation. In the next ten years, computational techniques like AI will play a significant role in EIC data science. One of the biggest challenges I anticipate is being able to keep up and educate myself with regards to advancements in new methods and AI-driven tools.

Additionally, there is a possibility that the major programming languages that we presently use in the particle physics community, such as C++ and Python, may be replaced by new AI-friendly or faster computing languages, such as Julia, which is easier to code and nearly as fast as C. This change would impose a completely new challenge to the whole EIC community.

I enjoy exploring and working on new research fields in nuclear and particle physics. It is a great opportunity to learn new physics as well as new data analysis techniques and tools. Moreover, nuclear and particle physics tries to answer some of the fundamental questions that humankind has always wanted to know, especially around uncovering and understanding the universe's building blocks. Knowing that I am trying to contribute and work towards this end inspires me to indulge in more and explore new things. I have always enjoyed working on finding answers to some of the fundamental questions in physics.

I have prominent “things” on both desktops! On my physical desktop, there are some books for my upcoming fall semester nuclear and particle physics teaching course. On my virtual desktop, there are tools like eAST (eA simulation toolkit)  and Acts Common Tracking Software (ACTS) that will contribute toward EIC and some Monte Carlo event generators and high-energy physics (HEP) development environment tools/packages.

Well, I try my best to balance my teaching duties and research activities. The teaching duties include full-time teaching in nuclear and particle physics courses, statistical mechanics, conducting labs (a general physics and a computer programming lab) and student evaluations. In research, I contribute to the EIC-related projects and soon, I am going to join the ALICE-India collaboration and continue working on heavy-ion physics. In addition, I also carry out phenomenological studies focusing on the strangeness production, underlying event, and Multiple Parton Interactions in small systems. I also mentor and guide graduate students in research. One of my students (a Ph.D. candidate) is contributing in the EIC project. And there are, of course, meetings related to local departmental activities, EIC-related meetings, and communications with collaborators; I stay busy.

Academically, I love teaching-related activities, mentoring and interacting with the students—especially helping them overcome their doubts about our field. I enjoy working on the LHC data associated with heavy-ion physics. I also do nuclear and particle physics phenomenology work in my spare time. And I am an avid sports fan who loves to play cricket, squash, and badminton!

* This profile features a member of the A Totally Hermetic Electron-Nucleus Apparatus (ATHENA) collaboration, which is developing an EIC detector concept inspired by the Yellow Report and based on a new central detector magnet up to 3 Tesla. Other profiles in this series feature members of the EIC Comprehensive Chromodynamics Experiment (ECCE) consortium, which is currently developing a general detector concept that meets the design requirements and performance goals for an EIC detector as laid out by the EIC Yellow-Report process.