The following news story, issued by Physics World, describes a paper recently published in Physical Review X. The paper details how a team of researchers used resonant inelastic x-ray spectroscopy to study correlated metals. The team led by Thorsten Schmitt (Paul Scherrer Institute) and Jonathan Pelliciari (Brookhaven National Laboratory) together with Keith Gilmore (formerly Brookhaven Lab, now Humboldt University in Berlin) have developed a unique way to  produce an approximation to the RIXS spectrum based on theoretical calculations that can be used to help interpret the measured data. The researchers successfully tested their technique on barium-iron-arsenide. For more information on Brookhaven’s role in this research, please contact: Cara Laasch, 631-344-8458, laasch@bnl.gov. 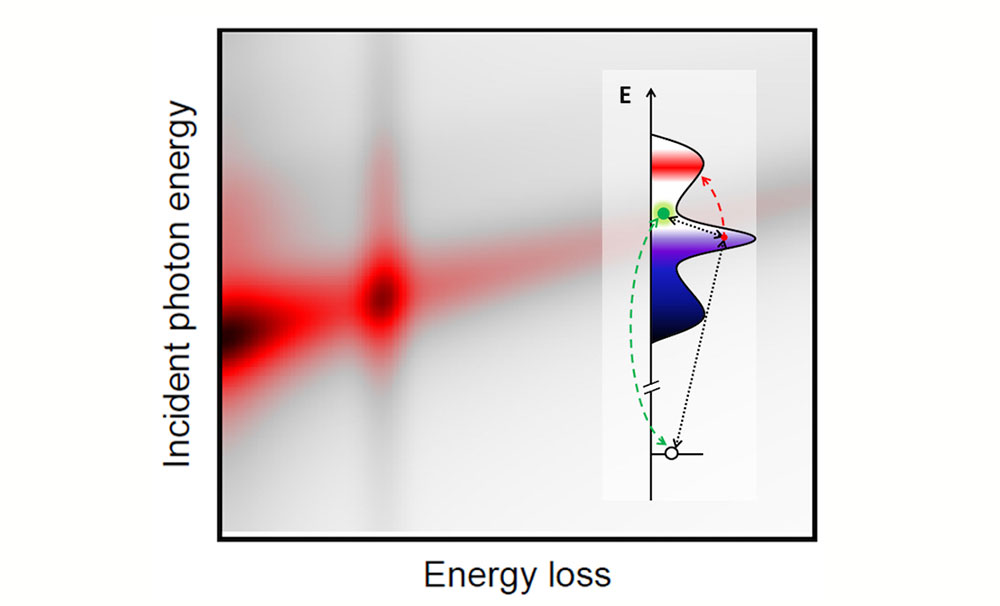 Researchers at the Paul Scherrer Institute (PSI) in Switzerland and the Brookhaven National Laboratory (BNL) in the US have employed an advanced X-ray spectroscopy technique to study the complex electronic properties of so-called correlated metals for the first time. Their findings could help us better understand quantum materials such as magnets, multiferroics and unconventional superconductors.

Correlated materials get their name from the behaviour of their electrons, which interact much more strongly with one another than is possible in conventional materials. This coupling between electrons makes the physics of correlated materials extremely rich and promising for a host of applications in data processing and quantum computing, but it also makes them challenging to study.

Researchers led by Thorsten Schmitt and Jonathan Pelliciari have been using the intense and extremely precise radiation from the Swiss Light Source (SLS) at the PSI to probe these materials with a technique called resonant inelastic x-ray scattering (RIXS). Here, soft X-rays are scattered off a sample while the incident X-ray beam is tuned so that its energy excites electrons from a lower electron orbital to a higher electron orbital. This process leaves behind a “hole” in the lower electron orbital, which disturbs the system and triggers various electrodynamic processes.

After a short time, the hole in the lower electron orbital is filled and X-ray light is remitted. The spectrum of this so-called inelastically-scattered radiation contains information about the induced electrodynamic processes, which in turn provides insights into the electronic structure of the material being studied.

While the RIXS technique works well for correlated insulators, it has previously run into trouble when probing correlated metals because so many different electrodynamic processes occur during scattering. This complexity makes it hard to interpret spectra from correlated metals without some other reference point, Schmitt says. As his colleague Keith Gilmore explains, they need to compare their experimental spectra with theoretical calculations before they can satisfactorily interpret the data generated by synchrotrons equipped with hundred-metre-long beamlines. “Thus far, this has limited rigorous testing of theories and our ability to predict the outcome of the experiments,” says Gilmore, who formerly worked at BNL and is now at Humboldt University in Berlin.

Gilmore goes on to explain that some of the most interesting quantum materials are produced by doping insulating compounds to make them metallic. However, the metallic versions of these materials have so many electrons and orbitals that simulating them is too costly in processing terms for typical computational methods. “The insulating case is simpler because we can use model calculations that can be solved exactly – something that is impossible for metals,” he says. Initial attempts to describe the RIXS process in metals and correlated metals were made as early as in the 1970s, Pelliciari adds, but the lack of experimental data slowed further theoretical development.

More recently, the advent of new, more powerful computational tools, together with novel instrumentation, has made it possible to compare the theory of these complex systems with calculations for the first time. The technique developed by the PSI/BNL team does this in a unique way. The researchers start with an electronic structure that they obtain using density functional theory, a well-established theoretical framework. They then use a different method called many-body perturbation theory to calculate the excited states produced by the X-ray beam. “In this way, we produce a first approximation to the RIXS spectrum and then improve this initial calculation by evaluating more complex correlated responses to the X-ray excitation that we initially neglected in the perturbation theory calculation,” Gilmore tells Physics World, adding that the latter step involves a real-time dependent density functional theory calculation. By combining the contributions of one electron with the coordinated reaction of all the other electrons, he says, they can overcome their previous lack of predictive power.

The researchers successfully tested their technique on barium-iron-arsenide, which becomes an unconventional high-temperature superconductor when a certain number of potassium atoms are added to it. They used the X-ray beam to excite an inner electron in the iron atom in the material from the ground state to the higher energy valance band. As mentioned, this creates further secondary excitation and triggers complex decay process that show up in the spectral structure.

“Our work means that it is now possible to describe the RIXS process by providing a complete description of the material and of the electrodynamic processes occurring during the spectroscopic response to excitation with resonant X-rays,” Gilmore says.  “This combined experimental and theoretical approach greatly enhances our ability to gain valuable new insights into the fascinating behaviour of correlated metals using RIXS.”

The research is detailed in Physical Review X.