In mid-July, more than 30 educators from two unique groups came to Brookhaven Lab to gain synchrotron skills for themselves and their students. 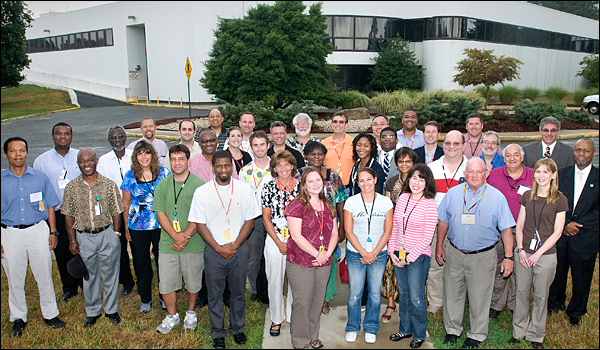 Participants in the joint INCREASE-InSynC workshop

Participants in the two groups — the Interdisciplinary Consortium for Research and Educational Access in Science and Engineering (INCREASE) and Introducing Synchrotrons into the Classroom (InSynC) — spent three days at the National Synchrotron Light Source (NSLS) to understand the basics of synchrotron mechanics, participate in hands-on demonstrations, and learn how to write a proposal for beam time. The joint workshop was organized by staff at the NSLS and Brookhaven’s Office of Educational Programs.

“Combining these groups in a synergistic way is important,” Brookhaven Lab Director Sam Aronson told the participants at the opening session. “Together, we are trying to develop the next generation of scientists and engineers for this country, and for us. We’re creating new pathways into the science and technology enterprise — tapping into groups where there’s no history of participation and leveraging them.”

Formed at Brookhaven in 2007, INCREASE aims to promote research in Historically Black Colleges and Universities (HBCUs) and other minority-serving institutions (MSIs) at national user facilities — in particular, the NSLS — as well as to facilitate education and research training, especially for African Americans, Hispanics, and women. 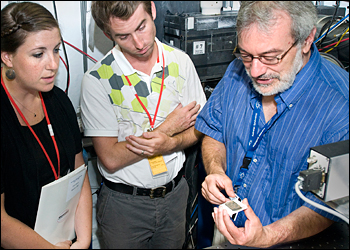 InSynC, launched this summer, enables high school teachers and students to gain remote access to experiment with synchrotron beam time through a competitive, peer-reviewed proposal process. The program trains both teachers and students to formulate a hypothesis-driven scientific problem and learn the skills of writing a competitive beam time proposal.

After receiving an overview of the NSLS, NSLS-II and the goals for the workshop, participants were divided into two groups: NSLS “newbies” (InSynC teachers and new INCREASE members) and returning INCREASE members. The newbies learned the basics of the NSLS through talks led by scientific staff and seasoned users, a tour of the experimental floor, and hands-on activities focused on x-ray fluorescence microscopy, Fourier transform infrared microspectroscopy, macromolecular crystallography, and x-ray absorption spectroscopy. They also discussed research ideas with NSLS scientists and took a crash course in writing successful beam time proposals.

Meanwhile, returning INCREASE members discussed goals for the consortium. In the four years since its creation, INCREASE has made much progress, said Hampton University School of Engineering Dean and founding INCREASE member Eric Sheppard, but it still has a long way to go. In addition to increasing the number of synchrotron users in the group, becoming more active in NSLS conferences and meetings, and expanding to other MSIs, the ultimate goal for INCREASE is to host a National Science Foundation Science and Technology Center with help from Brookhaven and possibly other national laboratories. As a step toward this goal, INCREASE members spent much of the meeting trying to find a common theme among participants, discussing strategic partnerships and structure, and building action teams.

On the last day of the workshop, all of the participants presented their proposal ideas and received feedback from NSLS scientists. Part of the group also visited Stony Brook University to learn about the Consortium for Materials Properties Research in Earth Sciences (COMPRES) — an organization that facilitates the operation of high-pressure beamlines at the NSLS and other user facilities — and the university’s Master of Science in Instrumentation program.

At the beginning of the school year, the trained InSynC teachers will work with their students to develop a synchrotron experiment. Their proposals will be reviewed by a panel of scientists and teachers, and the groups with the highest scores will be awarded beam time. From the comfort of their classrooms, students will discuss projects with NSLS scientists, share data, and conduct their experiment via Internet-enabled tools.

“What I find most exciting about InSynC is the partnership that it makes between scientists at the lab and the classroom,” said Islip Middle School science teacher Ashley Bloch, who also is a participant in the U.S. Department of Energy’s Academies Creating Teacher Scientists program. “It makes a more real world connection. It gives more of a depth to science that students are lacking so often with their education.”

Added North Babylon High School teacher Thomas Van Bell: “The opportunities here are tremendous for getting in contact and maintaining communication with world-class scientists. This is such an essential part to the research process, especially for students at the high school level. They’re limited in how much they can do and how far they can go with their projects when they’re not linked up with a mentor at a university or a facility like we have here.”

The Office of Workforce Development for Teachers and Students within the DOE Office of Science is providing support for InSynC. INCREASE is being supported, in part, by a National Science Foundation grant to Southern University.