The following feature story was originally posted by the U.S. Department of Energy’s (DOE) Fermi National Accelerator Laboratory. Scientists at DOE’s Brookhaven National Laboratory contributed to the initial design of the DUNE “anode plane assemblies” now being produced at Daresbury Laboratory in the UK. Brookhaven scientists also developed the cold electronics for reading out signals from these detector components, made other major contributions to the ProtoDUNE experiment, and are active partners in the DUNE collaboration. 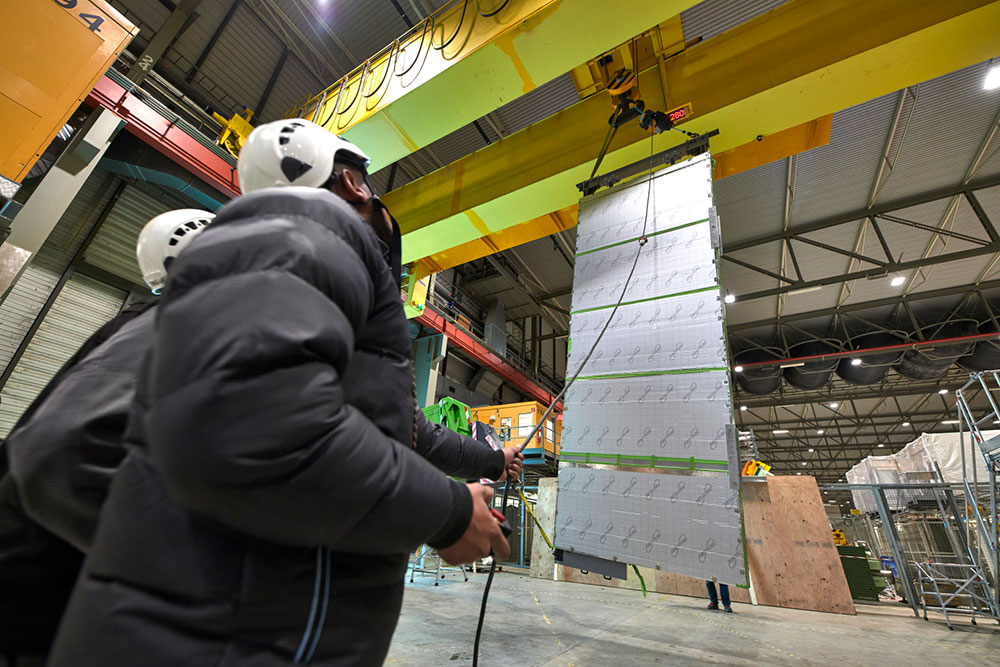 Unpacking a particle detector device known as APA for testing at CERN. APAs are key components for the international Deep Underground Neutrino Experiment, to be assembled in the United States. Photo: Julien Marius Ordan and Maximilien Brice, CERN

How can you study a particle that’s almost invisible? For the last decade, Justin Evans at the University of Manchester has been asking this question.

“The neutrino is clearly a weird particle,” said Evans. “It’s so light we haven’t even measured its absolute mass.”

Neutrinos are some of the most abundant particles in the universe, yet little is known about them because they evade conventional detection methods. When the United Kingdom joined the Deep Underground Neutrino Experiment in 2015, Evans saw an opportunity.

“We were thinking about what the UK could do for DUNE,” he said. “We wanted to have a big impact and make a key part of the detector.”

On Oct. 15, a large wooden box from Daresbury Laboratory in the United Kingdom arrived at the CERN Neutrino Platform. Inside was the first anode plane assembly, a key component in the DUNE Far Detector, to be mass-produced for DUNE.

More than 1,400 scientists and engineers in over 30 countries contribute to the experiment. Their goal is to paint a clearer picture of the origin of matter and how the universe came to be. DUNE will measure how neutrinos and antineutrinos behave during an 800-mile journey from the U.S. Department of Energy’s Fermi National Accelerator Laboratory near Chicago to Sanford Underground Research Facility in Lead, South Dakota. Because these particles and their antimatter counterparts rarely interact with matter, they will pass directly through the earth before arriving at massive subterranean particle detectors that have a total volume equivalent to about 22 Olympic-size swimming pools and will be filled with 70,000 tons of liquid argon. These gigantic detectors will allow scientists to study the differences in behavior between neutrinos and antineutrinos. The results will shed light on the role neutrinos played in the evolution of the universe.

The APAs build on an idea originally developed by Nobel Laureate Carlo Rubbia in the 1970s. In each APA, 15 miles of hair-thin wire are wrapped in four different directions around a support structure the size of a church door. Electrons released from a neutrino colliding with an argon atom are pulled toward the wires by a strong electric field. Scientists then can reconstruct what happened during the original neutrino-argon collision based on when and where the released electrons intersect with the wires. 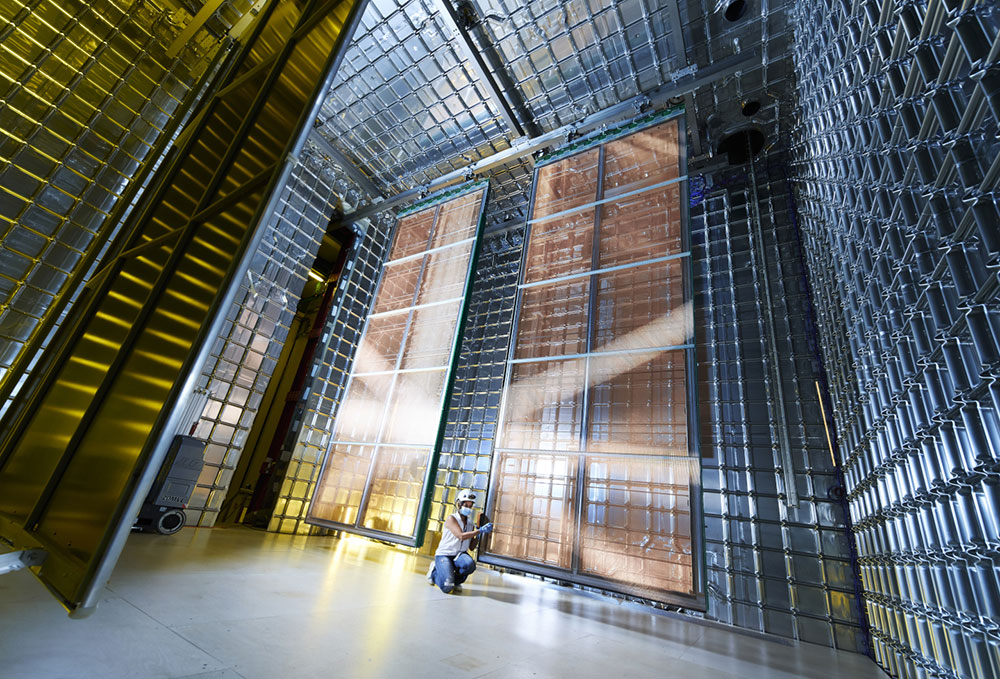 Scientists can reconstruct what happened during a neutrino-argon collision based on when and where the released electrons are detected on an APA wire plane made from 15 miles of hair-thin wire. Photo: Julien Marius Ordan, CERN

Even though this technique for detecting neutrinos has been around for decades, adapting it for DUNE—which will be built one mile underground to shield the detectors from cosmic rays that hit Earth’s surface—was a challenge.

“That’s the ship-in-the-bottle aspect of underground physics,” said Evans. “Everything has to go down in chunks smaller than the mine shaft.”

The final APA design comes after a successful two-year run of a prototype of the DUNE detector, known as ProtoDUNE, located at the CERN Neutrino Platform. These final DUNE-production APAs only have slight modifications from the original prototypes.

Another consideration was creating an APA blueprint that is suitable for mass production of 150 APAs on both sides of the Atlantic: 130 from the UK and an additional 20 from the U.S.

“We needed a design that is robust enough that we can make 150 of them,” said Hannah Newton, the project manager coordinating the APA production at Daresbury Laboratory. “There’s no more tinker time.”

Over the next few months, three more APAs will arrive at the CERN neutrino platform for final testing inside the ProtoDUNE-SP cryostat during early 2022, with plans for mass production to start up in spring. Once produced, all APAs will be shipped to South Dakota for installation.

“The cold electronics testing inside ProtoDUNE will be the final proof that the all the systems integrate with one another,” Newton said. “It’s the final assurance that we’re good to go and can ramp up production.”

Fermilab is the host laboratory for DUNE, in partnership with funding agencies and scientists from around the world.