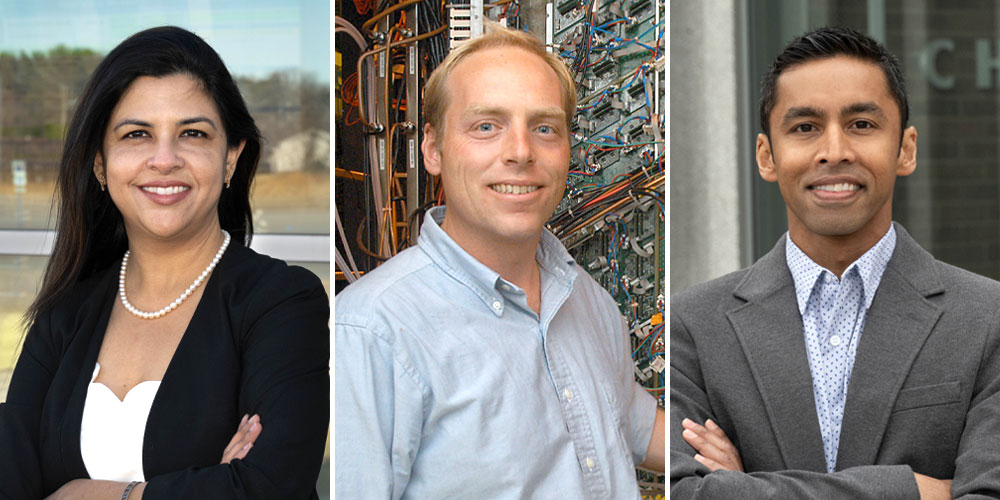 Simerjeet Gill, James Dunlop, and Sanjaya Senanayake, three accomplished scientists from the U.S, Department of Energy’s (DOE) Brookhaven National Laboratory, were selected as fellows for the 2021–2022 cohort of the Oppenheimer Science and Energy Leadership Program (OSELP). Established in 2017, OSELP is a distinguished fellowship program that brings together exceptional leaders to explore the complexities, challenges, and opportunities facing the national laboratory system and the DOE.

The fifth OSELP cohort consists of 33 individuals representing all 17 of the DOE national labs, with professional backgrounds spanning technical, operational, and strategic domains. The Oppenheimer Fellow selection process is highly competitive. Candidates are nominated by national lab directors, assessed by a committee of former lab directors and former senior DOE officials, and accepted into the program by the National Laboratory Directors’ Council (NLDC).

OSELP Fellows engage in a series of virtual (and when feasible, in-person) visits to other national labs, allowing them to experience the diversity, complexity, and scope of the entire DOE complex and its research partners. This hands-on experience provides a unique opportunity to meaningfully engage with senior national lab leadership. Fellows distill what they have learned into think-pieces that address major organizational, policy, scientific, or other challenges within the labs’ mission space.

“It’s exciting seeing where Brookhaven National Laboratory fits in the big picture,” said Simerjeet Gill. “You see how similar the challenges are at all of these national laboratories, but more importantly, you see how differently they’re approached. It provides insight into what makes a successful project and how we can use our unique capabilities to achieve common goals.”

Gill is a materials scientist and deputy chair of the Nuclear Science and Technology Department specializing in nuclear materials. She has focused her efforts on clean energy—a major priority of this year’s OSELP cohort. Gill’s group studies the effects of corrosion and radiation on materials in extreme environments, including nuclear reactors. In fact, she’s a principal investigator for a DOE Energy Frontier Research Center (EFRC) called Molten Salts in Extreme Environments. Molten salts can transfer heat effectively, making them attractive as coolants. Molten salt-cooled nuclear reactors could be a promising source of safer, cleaner, more cost-effective power. Gill and her team collaborate with other national laboratories and universities to gain a fundamental and predictive understanding of molten salt properties and processes, aiding in the development of molten salt reactor technology.

As part of the OSELP cohort, Gill brings her expertise to “dedicated discussions on synergies between national labs and how can we help each other achieve our goals and face national challenges like climate change, decarbonization, and national security. We also explore initiatives that will retain talent across the national lab complex and benefit the next generation of national lab scientists,” she said.

She noted that engaging the team in discussions of diversity, equity, and inclusion (DEI) has also been a priority for the cohort. “Being a female scientist, I know a lot about the necessity for diversity and inclusion,” she said.

The cohort itself includes a diverse mix of people—and not just scientists.

“There’s a chief diversity, equity and inclusion officer, there is a director of tech transfer and private partnerships, there are scientists, there are division directors. It’s a really good mix of perspectives,” said James Dunlop, Associate Chair of Nuclear Physics in the Brookhaven Lab’s Physics Department.

Working on cutting edge science and taking on various leadership roles, including acting as a deputy spokesperson for the STAR collaboration at the Relativistic Heavy Ion Collider (RHIC), has given Dunlop the chance to explore several facets of the research process. From starting up a collider in a completely new energy regime to running the analysis and publication of data, Dunlop has tackled big picture issues from different angles and found areas for growth and opportunity.

“I have had exposure to how experiments are run at other collider facilities both here and abroad,” he explained, “but I haven’t had that much exposure to how things are done at other national labs. It’s interesting to compare experiences with a laboratory that has a very different applied focus, like the National Nuclear Security Administration (NNSA) labs. Some of these facilities are gigantic, like Sandia National Laboratories, and it’s interesting to see how a facility of that size is managed. The chance to talk to the leaders of those labs and pick their brains a little bit is one of the things that really excited me about the Oppenheimer Fellowship.”

Sanjaya Senanayake, a principal investigator in the catalysis reactivity and structure group within Brookhaven National Laboratory’s Chemistry Division, also emphasized the need for collaboration in the face of pressing national and global scale issues. As a chemist, Senanayake has been involved in research to identify catalysts that will allow for the purification of abundant hydrogen for use as an alternative to fossil fuels. There are still some hurdles to clear, however, which he and his team are hard at work addressing.

“Purifying hydrogen is extremely expensive and also quite carbon intensive. The current processes to extract pure hydrogen are extremely environmentally unsustainable,” he said, explaining that feasibly harnessing the power of hydrogen is only one step in paving the way towards a carbon negative future. This initiative relies not only on the drastic reduction of carbon dioxide emissions but the development and deployment of technologies that will remove carbon dioxide from the atmosphere and convert it into a more useful material or store it durably and efficiently.

Senanayake emphasized that the success of these larger scale initiatives will rely on the expertise and support of professionals from all areas of the national laboratory complex.

“In this program, it has been great to have these multidisciplinary interactions. My job has always been strictly about science up to this point. [Through this fellowship,] I've come to appreciate what is entailed in these operational roles within such large facilities,” he said.

Senanayake encouraged other national lab staff to apply to OSELP.

“I think we need different perspectives, and it's not just scientists in this cohort. At the end of the year, we come together to pitch a strong case for a couple of key things that we agree to advocate for, and it helps to have a mix of people and ideas,” he said.

The cohort will present their think-pieces, summarizing their suggestions, to the NLDC and other senior leaders at a capstone event that closes the program in December in Washington, D.C. You can read think pieces from previous cohorts on OSELP’s website.

OSELP is managed on behalf of the NLDC by the University of Colorado Boulder. Professor Kevin Doran serves as the Program Director. Inquiries about the program should be directed to Professor Doran at dorank@colorado.edu. More details about the program and alumni fellows may be found on the OSELP website.