The following campaign update was written by Michael Jensen, a meteorologist at the U.S. Department of Energy’s Brookhaven National Laboratory. He the principal investigator for the TRacking Aerosol Convection interactions ExpeRiment (TRACER) in Texas. It was originally published as a blog post by DOE’s Atmospheric Radiation Measurement (ARM) user facility.

TRACER Intensive Period Kicks Off with a Bang, then a Fizzle, and Lots of Heat

On June 2 (left), we were happy to have these clouds at the ARM Mobile Facility site. On June 6 (right), we were less excited about these shallow cumulus clouds at La Porte.

After years of planning and preparations, site installations, and eight months of data collection, the Houston-based TRACER campaign moved into its intensive operational period (IOP) on June 1. What does this mean? First and foremost, a third ground-based instrument site was added. This site in Guy is about 80 kilometers away from the ARM Mobile Facility in La Porte and about 50 km from the C-band precipitation radar in Pearland.

All of these sites will run through September 30, the last day of the IOP and the campaign.

ASR scientists brought more instruments, bolstering the measurements at our ARM sites and dispersing across the Houston region to sample the regional variability of important thermodynamic and aerosol properties. Also, the ARM tethered balloon system began operations, raising and lowering various sets of instruments to profile the lower atmosphere. 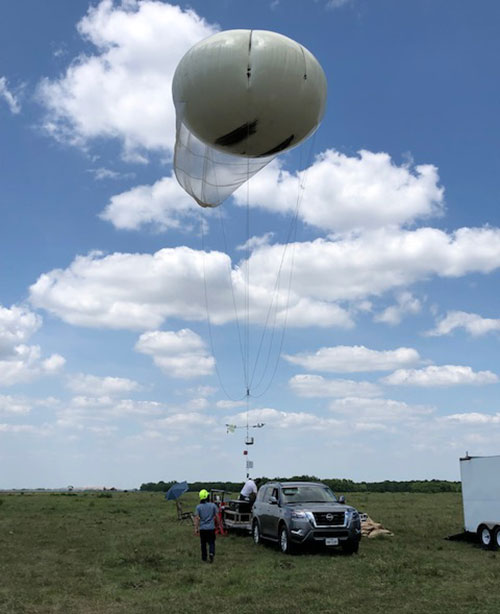 The tethered balloon system went up at the new TRACER site in Guy on June 7.

In addition, interagency partners from the National Science Foundation began their operations, with the ESCAPE project deploying aircraft and mobile trucks and the CUBE project studying the effects of the urban heat island.

As the summer goes on, different researchers will join the campaign, bringing even more instruments.

On June 2 (left), we were happy to have these clouds at the ARM Mobile Facility site. On June 6 (right), we were less excited about these shallow cumulus clouds at La Porte.

Nature gives, then takes away

As I sit at Bush Intercontinental Airport, waiting for my flight home after being in the field for the first two weeks of the IOP, I have a few moments to reflect. So, how is it going?

The IOP started with a bang. During the first three days, we experienced many of the convective clouds we are here to study. Based on the daily forecast, we jumped into enhanced operations each of those days. What a great start!

Given that we planned for 40 enhanced operational days over the summer, or 10 per month, I wondered if we would burn through our allotment in no time. But I should not have feared. There is an old saying among scientists that one sure way to get atypical weather in a location is to plan a field campaign there.

On June 4 (left), I had a nice chat with technician Gabi Pessoa at the mobile facility site. On June 7 (right), ARM's Aerosol Observing System (with stack) collected data in Guy.

Following those great first days, the weather changed and became dominated by a convection-suppressing ridge, high pressure at the surface, and a dry middle atmosphere. Despite the warm and moist conditions at the surface, and plenty of energy in the atmosphere, the convective clouds just cannot develop. While an occasional lucky cumulus congestus might reach above the boundary layer, the dry air there quickly evaporates the cloud away.

We’ve now sat in these conditions for more than 10 days—no deep convection, no precipitation, just lots of shallow boundary-layer clouds (which in themselves will be interesting to study). Our forecast team and mission scientists have been watching and hoping, wanting to call for enhanced operations at the slightest sign of a growing convective cloud. But four months is a long time for an IOP, and as hard as it may feel sometimes, patience is the best path for now. The forecast is hopeful for some great conditions by this weekend (around June 18).

In the meantime, ARM instruments continue measuring the shallow clouds, aerosols, radiation, and thermodynamics to provide fodder for lots of investigations, and we wait for the deeper clouds to return so we can spring back into action.