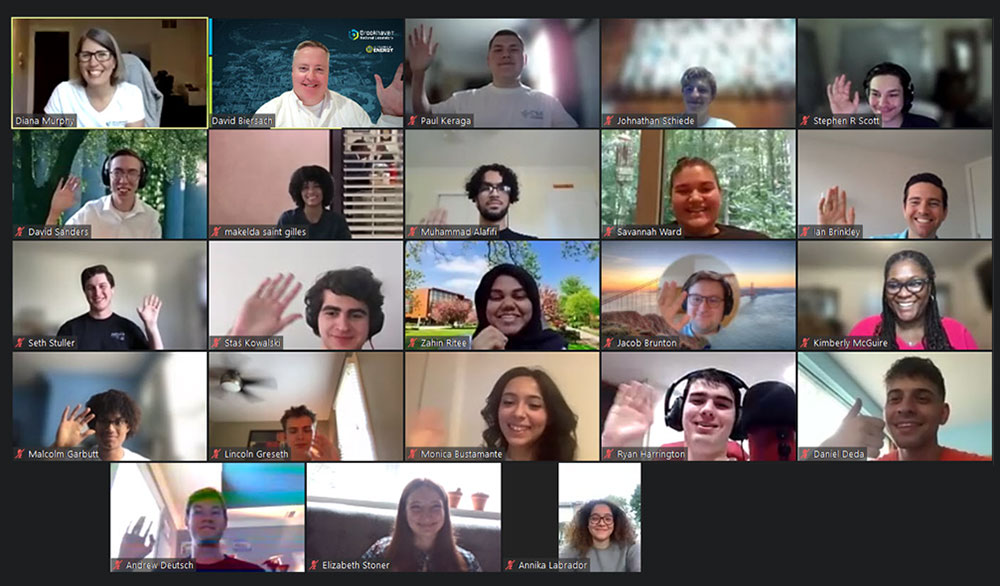 Students of QIS101 sign off for the summer, but not before a virtual closing ceremony

Scientific computing is essential to research, and many universities have courses and degrees that are preparing young scientists to integrate these digital tools into their field of study. As problems get more complex, however, and data becomes more plentiful, traditional computation has its limits. Training the next generation of researchers on advanced computing is imperative, but resources for them are limited. That training gap is what inspired the Brookhaven National Laboratory-led Co-design Center for Quantum Advantage (C2QA) to design the QIS101 quantum computing summer school program.

Quantum computing, a relatively new field that only began to emerge in the early nineties, has the potential to solve problems that traditional computing could take years to solve in a matter of minutes. While this makes it an invaluable asset to research, it is also much more complex than traditional scientific computing. A basic understanding of traditional computer science does not require much more than a strong algebra background, but the math needed to build a foundation in quantum computing is much more advanced. Getting college undergraduates on the ground floor of this emerging field as early as possible is crucial, as it requires a lot of prerequisite work to build a solid Quantum Information Science (QIS) foundation. Because it’s still an emerging field, students often face a lack of clear guidance on the best route to acquire quantum computing expertise.

“Many schools don't offer anything right now in quantum computing, so there's very little out there for undergrads,” said David Biersach, senior technology architect at U.S. Department of Energy’s (DOE) Brookhaven National Laboratory and author of the course. “As a relatively new field, it can take some time for universities to establish dedicated courses and programs. There are researchers pursuing classical science who have yet to be exposed to quantum programming. QIS is coming of age though, as access to quantum computers is becoming more accessible.” 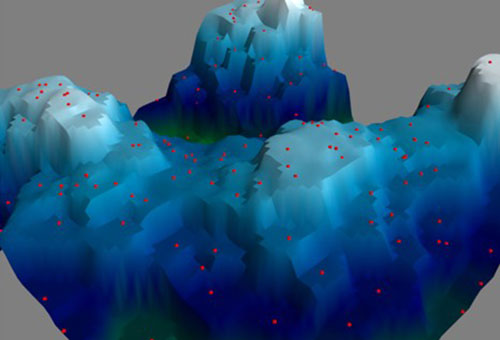 An example of real-world application, one of the projects the class had was estimating the ocean floor using randomly distributed spatial data (Inverse Distance Weighting)

As part of the new summer school, C2QA requires students to participate in six-hour classes, Monday through Friday, for six weeks. Undergraduate students engage in demonstrations and hands-on programming labs, listen to lectures from experts within C2QA, familiarize themselves with IBM’s Qiskit— an open-source software development kit based on Python that is used with quantum computers—and participate in regular activities to test their skills and gauge their progress. By the end, they will have written an impressive 50 different programs, which involves much more coding than a typical introductory computer science course requires. Students who successfully complete the C2QA course are presented with a certificate from Brookhaven Lab documenting their accomplishments.

The DOE and National Science Foundation (NSF) also provide the students with a stipend, understanding that the work necessary for this course makes it difficult to simultaneously hold a summer job. This  students an incentive to enroll and stay engaged with this challenging material.

“The center is investing their money and the students are investing their time,” explained Biersach. “This investment goes beyond that though. We expect to see these same students apply for Science Undergraduate Laboratory Internships (SULI) in labs across the Department of Energy complex. We want these students to become QIS ambassadors. Their ability to implement quantum algorithms to assist classical science projects will add distinct value to any research team they join.”

“With the skills accumulated from QIS101, these students will find themselves well equipped to meaningfully contribute to virtually any scientific research team,” said Andrew Deutsch, a teaching assistant for QIS 101.

The work that these students put in is time-consuming and difficult, so it’s important for them to also realize what they are investing in. Biersach emphasizes quantum computing’s diverse applicability and potential both in research and industry, which is something that has stuck with the students and inspires their dedication to the material.

“I really appreciate the way that Dave has designed the program to focus on different opportunities,” said Stanislaw Kowalski, a student in this year’s QIS101 course and an aerospace engineering and physics double major at Georgia Tech. “Dave has ensured that every single lecture and project is engaging for everyone, no matter what your familiarity with scientific and quantum computing is or your field of study. From biologists to computer scientists, everyone can find applicability to their field of study, whether you're trying to analyze and plot some data, study a system changing over time, or even just write clean, readable code. QIS101 builds a solid foundation for effective scientific computing.” 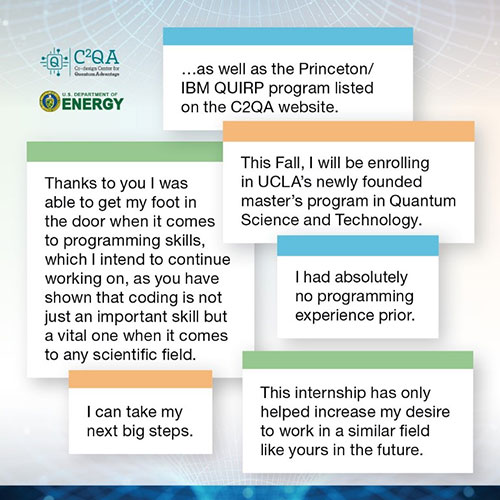 It is also important that programs like this give more students the opportunity to be exposed to these concepts and provide them with the resources to pursue those interests. As the field of quantum computing grows, the research community needs to have diverse perspectives and inclusivity. Brookhaven Lab has partnered with The Louis Stokes Alliances for Minority Participation (LSAMP), an organization that supports university alliances and post-baccalaureate fellowship programs focused on increasing the number of STEM bachelor and graduate degrees awarded to populations historically underrepresented in STEM fields, to recruit undergrads for this course. With their help, this year’s class is nearly 40 percent female students, with 44 percent underrepresented minority participation. There are also students from diverse majors and backgrounds within math and science.

“LSAMP has brought us some really great students from a broad spectrum of universities,” remarked Biersach. “Quantum computing resources currently tend to only be available at the Ivy League schools, and programs like C2QA QIS101 help expand the reach of quantum computing to a larger group of equally talented students”

Having different backgrounds has helped students help each other as well.

“The students often review each other’s code,” explained Deutsch. “They walk each other through their unique solutions, and since there are usually several ways to solve these problems, each student has something to learn. It also teaches them how to communicate their work, an essential skill for any scientific researcher.”

The course has already received a lot of positive feedback, including students inquiring about the SULI program and other internships focused on quantum computing, like C2QA partners IBM and Princeton’s Quantum Undergraduate Research at IBM and Princeton (QURIP) Internship. Biersach hopes to branch out even further with this program by engaging educators in quantum information science next year.

“We are working on a course geared towards high school teachers and college professors so that they can become more comfortable and familiar with quantum computing and hopefully introduce it to their own students. Reaching out and working directly with students is great—but we need to make this a national initiative, and, therefore, to scale it up, we’ll need to closely support educators”