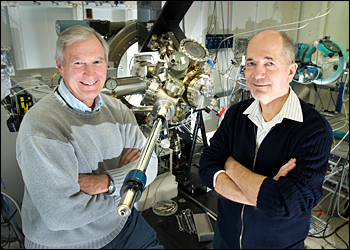 Ron Pindak (left) and Ivan Božović at NSLS beamline X21, which could be upgraded to perform COBRA measurements as a jump-start program for NSLS-II.

Using a combination of unique tools to build and analyze films just nanometers thick, a group of researchers found subtle structural changes that are known to alter superconducting properties. Their findings stress the importance of studying both the superficial and deep features of superconducting materials, which transport electricity with zero resistance and are envisioned for use in applications like ultrafast, power-saving electronics or more efficient electricity lines.

High-temperature superconducting cuprates (copper-oxides) don’t exhibit their “super” properties until they’re cooled below a certain transition temperature. As their name suggests, these superconductors have some of the warmest transition temperatures out there; yet they still require rather chilly conditions — all far below freezing, some near absolute zero (-273 degrees Celsius) — to operate without energy loss.

The recent study was spurred by a surprising discovery made in 2008 by Božović and colleagues in Brookhaven's Condensed Matter Physics and Materials Science Department: an ultrathin film — just a few nanometers, or billionths of a meter, thick — made of two non-superconducting cuprates (a metal and an insulator) actually exhibits superconductivity at the interface between the layers. This finding has triggered a debate about the super-property’s origin and the possibility of turning the material’s transition temperature thermostat even higher.

But in order to reveal more information about this unique ultrathin film — which is made from a cuprate containing lanthanum, strontium, copper, and oxygen and appropriately called LSCO — scientists need a different set of tools. 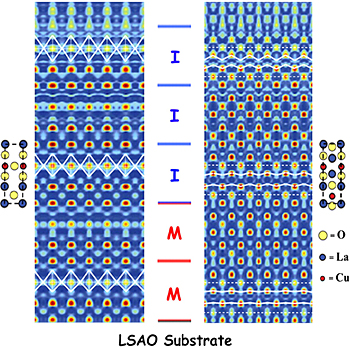 The measured electron density in two atomic planes of the interfacial superconducting bilayer LSCO film showing the positions of the atoms in two metallic (M) and three insulating (I) unit cells Left: in the (100) plane, the white lines highlight the projected shapes of the CuO6 octahedra, in particular the elongation near the surface; Right: in (110) plane, the white lines highlight the projected profiles of the La-apical O planes, in particular the enhanced corrugation near the surface.

“The interesting properties exhibited by these films, such as high-temperature superconductivity, are bulk phenomena, whereas the techniques used to characterize these films are typically surface-sensitive,” said National Synchrotron Light Source physicist Ron Pindak. “X-ray diffraction, on the contrary, is a technique that allows one to characterize the full film: surface, interior, and even the support substrate. This motivated our project.”

The researchers grew a variety of states of LSCO, which has six atomic layers in its repeating structural unit cell, using a unique molecular beam epitaxy system at Brookhaven that allows materials to be deposited atom by atom, giving precise control of each layer's thickness. By varying the concentration of strontium in the cuprate, the scientists can create LSCO that behaves in three different ways: like a metal, an insulator, or a superconductor.

They then used x-ray diffraction at Argonne National Laboratory’s Advanced Photon Source to determine the positions of the atoms inside the film. This was only possible with improvements made to a synchrotron technique called coherent Bragg rod analysis (COBRA), previously developed by two members of the research team, Brookhaven’s Pindak and Yizhak Yacoby of Hebrew University, together with Roy Clarke of the University of Michigan.

COBRA was named for ridge-like x-ray-scattering features called “Bragg rods” that result when the repeating structure of the atoms in a crystal abruptly terminates at a surface. If a thin film is grown on this surface with the atoms in its first layer arranged to match the positions of the atoms in the top layer of the underlying substrate, as was the case for the LSCO films, then the x-ray scattering from these atoms will also occur along the Bragg rods and coherently interfere with the scattering from the support crystal. This is similar to how two laser beams will scatter from an object and interfere to form a hologram. Both the scattered x-ray intensity and phase — the shift in position between the incident and diffracted x-ray waves — must be determined in order to directly convert the scattering features into the actual film structure. The COBRA analysis technique is used to extract the x-ray phase from the interference pattern that occurs along the Bragg rods.

Although it’s efficient, COBRA isn’t the most precise phase retrieval technique. To make up for this shortcoming, the researchers combined COBRA with Difference Mapping, a slower but more accurate procedure. The result is a precise technique that’s two orders of magnitude quicker than Difference Mapping alone.

This diffraction data was used to map the distance of LSCO’s out-of-plane (apical) oxygen atoms from the copper-oxygen plane, a characteristic known to affect the transition temperature of high-temperature superconductors.

“Measuring the apical oxygen distance was a challenging diffraction problem because oxygen is a weakly scattering atom compared to the other atoms in the complex oxide materials,” Pindak said. “It’s like trying to see a bush when it's surrounded by a forest.”

The group’s results, which were published in the May 4, 2010, edition of the Proceedings of the National Academy of Sciences, showed an unexpected discrepancy. The apical distance stays the same in metallic and superconducting LSCO films but increases in the metallic-insulating LSCO bilayer films previously studied by Božović’s team.

“These results underline the importance of accurate measurements of the crystalline structure of near-surface layers — such as enabled by the present method — for correct interpretation and understanding of surface-sensitive experiments,” Božović said. “To put it simply, the crystal structure of the few layers nearest to the surface can be very different from that inside the bulk — and in an unexpected ways.”

This research was funded by the U.S. Department of Energy. Other authors include Hua Zhou, Vladmir Y. Butko, and Gennady Logvenov (at Brookhaven for the study, now at Argonne National Laboratory, Ioffe Physical-Technical Institute, and Max Planck Institute, respectively) and Yizhak Yacoby (Hebrew University).