The Next Chapter in Modeling and Simulation for Computing 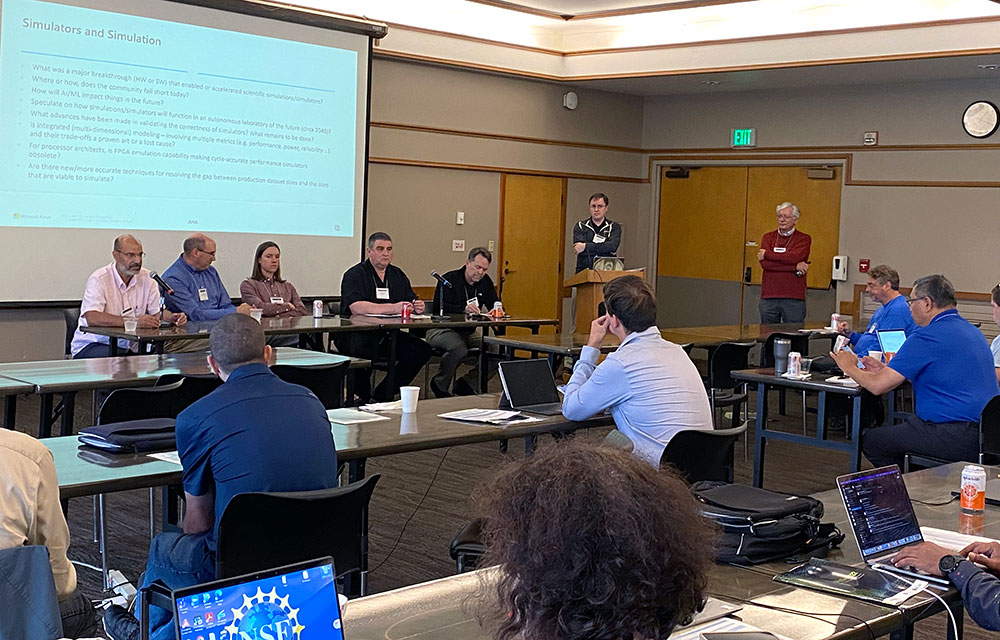 Panels that offer a diversity of perspectives are always popular at the Workshop on Modeling & Simulation of Systems and Applications, better known as ModSim.

The Workshop on Modeling & Simulation of Systems and Applications (ModSim 2022) kicked off its next decade of modeling the computing world by returning to University of Washington Botanic Gardens’ Center for Urban Horticulture in Seattle for the 11th annual meeting. This time, attendees were treated to Reflections on ModSim: Successes, Failures and the Future, which provided both a retrospective on where the field has been along with a look ahead at where it is going.

Since its inception, the ModSim workshop has been a resource for the community to address trends, methods, tools and technologies that are making the most impact in the research and application of modeling and simulation for high-performance computing (HPC) and on advanced HPC systems. ModSim 2022 was no exception. According to Adolfy Hoisie, longtime Organizing Committee Chair and Computing for National Security Department Chair of Brookhaven National Laboratory’s Computational Science Initiative, the “sheer joy of reassembling the community in a face-to-face event” only added to the energy. 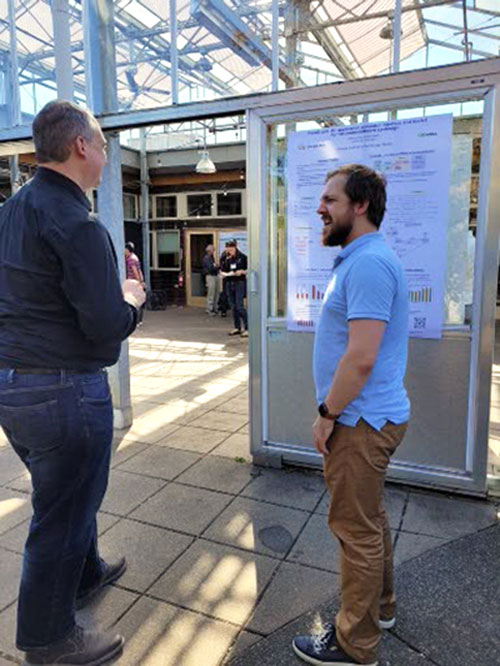 Mikhail Isaev, shown here (right) during the ModSim 2022 poster session, was awarded the ModSim 2022 Dr. Sudhakar Yalamanchili Award. Isaev is a doctoral student at Georgia Institute of Technology's School of Computer Science, where Yalamanchili was a popular professor.

“After two years of virtual workshops, there was a tangible enthusiasm for the opportunities afforded by in-person interactions,” he said. “There were exciting contributed presentations and a competitive field for this year’s Dr. Sudhakar Yalamanchili Award. On behalf of the ModSim 2022 Organizing Committee, we again congratulate Mikhail Isaev, from Georgia Institute of Technology, on being named this year’s Sudha Award winner. Sudha was such a beloved professor at Georgia Tech, so it is fitting that Mikhail brought the award ‘home’ to GT Computing.”

This year, ModSim 2022 attendees were treated to in-depth looks at the “making of” Blue Gene, Summit, Roadrunner (first petascale supercomputer), Fugaku and Frontier (first exascale HPC system) as shining examples of what modeling and simulation has done to enhance the power, performance and reliability of the world’s leading supercomputers. Invited speakers from across industry, including NVIDIA, Amazon Web Services, Meta and IBM, showcased the varied areas where ModSim has made—or will make—influential strides in their existing and future product lines. Meanwhile, keynote addresses from distinguished technical community leaders, David Mountain, Senior Technical Director, National Security Agency Advanced Computing Systems Research Program, and Horst Simon, Special Advisor at Lawrence Berkeley National Laboratory, offered their respective insights into the future (and some of the past) of ModSim and HPC beyond exascale. (Many of the ModSim 2022 presentations can be reviewed here.)

Throughout the workshop, presenters from academia and the federal national laboratories revealed more practical uses for ModSim across the hardware/software stack, as well as for microprocessor/system design and optimization, quantitative co-design and application optimization. In between, there were many hearty debates, for example, about the relative merits of central processing units vs. graphics processing units that sparked between José E. Moreira of IBM Research and Satoshi Matsuoka, Director of the RIKEN Center for Computational Science. This year, an additional ad hoc panel concept was introduced, allowing a self-assembled group to address and deliberate the ModSim 2022 Reflections theme more closely.

“ModSim 2022 proved to be a lively event, fueled a bit by its return to Seattle but just as much by the innovation that was shared and celebrated,” Hoisie added. “I hope to see some of the debates settled or at least offer a rematch at ModSim 2023. There is so much to look forward to in this still-evolving field.”

For additional details, including the full agenda and available presentations, visit the Workshop on Modeling & Simulation of Systems and Applications 2022 homepage.

Left: For more than a decade, the University of Washington's Center for Urban Horticulture has been the host venue for the ModSim workshops. In its return to Seattle, ModSim 2022 attendees were able to enjoy the outdoor poster session thanks to great weather. Right: This year's theme for ModSim 2022 was Reflections on ModSim: Successes, Failures and the Future, which exemplified the full spectrum of modeling and simulation research showcased by speakers from industry, academia and government.