The following news release issued by the Air Force Regional Hub Mid-Atlantic Network announces $450,000 in funding for four projects that feature government-academic-industrial teams. Among the awarded projects is Machine Learning-driven Optimal Design of Self-healing Vitrimer Composites for Multifunctional Coatings, which includes scientists from Brookhaven Lab’s Computational Science Initiative. The project aims to develop prototype coatings of self-healing materials, called vitrimers, for Air Force/Space Force-Northrop Grumman applications. Vitrimers are currently difficult to process, limiting their practical implementation. The proposed vitrimers promise to transform operations in extreme environments through their robustness and ability to create advanced structures and surfaces with desirable recyclability and curative properties. Such materials will require less maintenance and support. The project will use data-driven and machine learning techniques for optimal design of experiments to yield vitrimer composites with specific properties, allowing for faster design screening to produce commercially viable prototypes in less time. The U.S. Department of Energy’s Brookhaven National Laboratory is a founding member of the Air Force Regional Mid-Atlantic Hub. 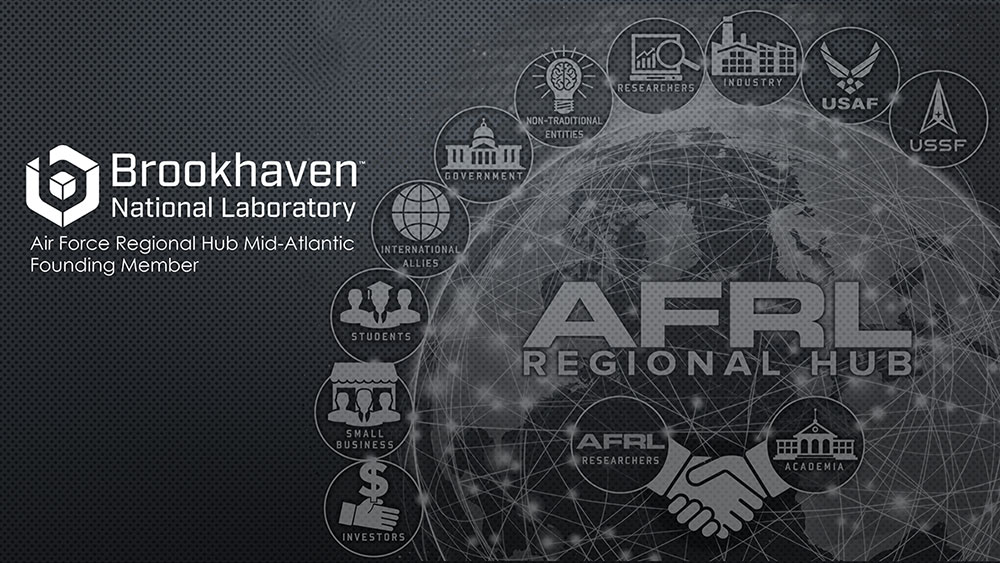 ITHACA, NY – The Air Force Research Laboratory’s (AFRL) newest regional hub network, led by Cornell University for the Mid-Atlantic, held its inaugural meeting Oct. 27-28, 2022, in Ithaca, New York. The meeting featured presentations on technical needs in forecasting material and component performance in extreme environments, and utilization of complex, heterogenous, and dynamic networks, along with breakout sessions to discuss the Hub Network’s structure and community. An independent expert panel also reviewed proposal presentations and awarded $450,000 to four projects with government-academic-industrial teams that are poised to accelerate the translation of high-risk innovations to the market that are crucial for U.S. defense and new commercial applications.

Technical presentations and ample time for social interactions aligned squarely with this year’s theme of “building community.” Similarly, almost all attendees across industry, government and academia agreed on the need to emphasize the Hub as a facilitator of connections that may not otherwise exist in the Hub Network’s absence.

“I’m pleased our inaugural meeting was productive for all,” said Patrick Govang, co-director of the Mid-Atlantic Hub Network. “The feedback we received over the meeting’s two days provided much-needed guidance for the Hub Network’s work and how we’ll continue to provide value to current and future members. Most notably is the need for us to grow the Hub Network into a place where new and fruitful collaborations form through a streamlined gateway to the Air Force and Space Force. We look forward to facilitating these relationships and broadening the region’s members.”

Vaia, the Chief Scientist of AFRL’s Materials and Manufacturing Directorate, also lauded the meeting and the Hub Network as a place for connections and collaborations.

“The Mid-Atlantic Hub Network’s first meeting was an outstanding success that set a positive tone for the year ahead,” Vaia said. “Most importantly, it allowed everyone to provide their impressions of the Hub and how to best frame it as a network rather than a standalone institution.  With this in mind, the Hub Network will provide value to all members by facilitating key connections across domains, and we’ve now gained the insight needed to make sure that happens.”

The Mid-Atlantic Hub Network plans to issue three project solicitations in spring, summer and fall focused on key areas of importance to AFRL, the United States Air Force, and the United States Space Force. Those interested in becoming a member of the Mid-Atlantic Hub Network or joining the Hub’s notification list should visit https://midatlantichub.afresearchlab.com/.

About the AFRL Mid-Atlantic Hub Network

The Air Force Research Laboratory, or AFRL, is the primary scientific research and development center for the Department of the Air Force. AFRL plays an integral role in leading the discovery, development, and integration of affordable warfighting technologies for our air, space and cyberspace force. With a workforce of more than 11,500 across nine technology areas and 40 other operations across the globe, AFRL provides a diverse portfolio of science and technology ranging from fundamental to advanced research and technology development. For more information, visit www.afresearchlab.com.