The Village Beacon Record, a local weekly newspaper, honored Oleg Gang, Center for Functional Nanomaterials, and Huilin Li, Biology Department, as its 2010 Men of the Year in Science and in Health/Medicine, respectively. They were featured in the December 30, 2010 edition of the newspaper.

Oleg Gang, Man of the Year in Science 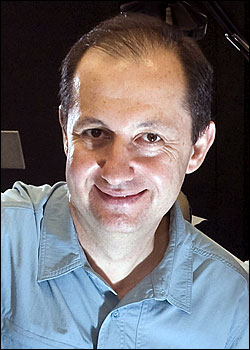 With colleagues from Brookhaven Lab, Gang developed a method to control the self-assembly of nanometer and micrometer-sized particles. The technique can be used to manipulate the structure — and therefore the properties and potential uses — of many materials at the molecular level. Such fine-tuning of materials promises numerous applications in efficient energy conversion, cell-targeted systems for drug delivery, and bio-molecular sensing for environmental monitoring and medical applications.

The Brookhaven team attached two types of DNA — the molecule that carries life’s genetic instructions — to gold nanoparticles and polystyrene (a type of plastic) microparticles, for the self-assembly experiment. These particles served as models for the possibility of using the technique with other small particles.

“In biology, DNA is mainly an informational material, while in nanoscience, DNA is an excellent structural material due to its natural ability to self-assemble according to well-specified programmable rules,” Gang explained.

“Our method is unique because we attached two types of DNA with different functions to particles’ surfaces,” he added. “The first type — complementary single strands of DNA — forms a double helix. The second type is non-complementary, neutral DNA, which provides a repulsive force that allows for regulating the size of particle clusters and the speed of their self-assembly with more precision.”

The scientists synthesized DNA to chemically react with the particles. They controlled the assembly process by keeping the total amount of DNA constant, while varying the relative fraction of the two types of DNA. This technique allowed for regulating assembly over a very broad range, from forming clusters consisting of millions of particles to almost keeping individual particles separate in a non-aggregating form.

Gang and his colleagues used the Center for Functional Nanomaterials (CFN) and the National Synchrotron Light Source (NSLS) to perform their groundbreaking research. At the CFN, the scientists used a specialized microscope to visualize the clusters that they fabricated. Gang and his team used x-rays at the NSLS to study particles in solution, DNA’s natural environment.

Gang earned a bachelor’s degree in physics from Chernivtsi National University, Ukraine, in 1991, a master’s degree in physics and a Ph.D. in soft matter physics, both from Bar-Ilan University, in 1994 and 2000, respectively. He was a postdoctoral Rothschild Fellow at Harvard University from 1999 to 2002, joining BNL as a Goldhaber Fellow in 2002. He became a staff scientist at the Lab’s CFN in 2004, and was promoted to the CFN’s leader for Soft Matter and Biomaterials Theme in 2006. Gang holds five patents, and he has received several honors for his research, including the University Distinction Award and the University President’s Award, both from Bar-Ilan University. He also was honored with the Wolf Foundation Scholarship for outstanding Ph.D. research.

Huilin Li, Man of the Year in Health/Medicine 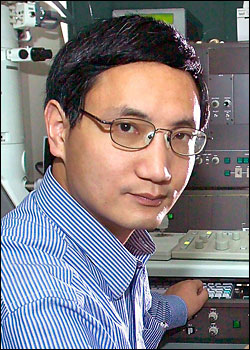 Huilin Li was a key member of a team of scientists from BNL, Stony Brook University (SBU), and Weill Cornell Medical College whose research revealed how a proteasome — a structure essential to the tuberculosis (TB) bacterium’s survival — is put together and how it works. These details could assist in the development of anti-TB drugs.

“Mycobacterium tuberculosis, the bacterium that causes TB, infects one person in three worldwide, so finding new ways to battle this pathogen is a major public health priority — particularly in developing nations where active TB infections are endemic,” Li said.

Most people infected with TB remain symptom-free because the bacterium that causes the disease is kept in check within immune system cells. These cells produce compounds such as nitric oxide, which scientists believe damage or destroy the bacteria’s proteins. When the damaged proteins accumulate, they kill the bacteria. But the TB proteasome, a protein-cleaving complex, carves up the damaged proteins, allowing Mycobacterium tuberculosis to survive, and possibly go on to cause active infections. The recent research performed by Li and his collaborators may provide important clues on ways to disable this action.

In a recent study, Li and his colleagues used the National Synchrotron Light Source (NSLS) and a special type of microscope to take molecular-level snapshots of the proteasome at various stages of assembly. The studies revealed important changes in the shapes of the components of the proteasome structure as well as details about the actions of the proteasome. The snapshots also showed how one particular component could inhibit the assembly process.

“Such detailed understanding of the assembly process might suggest novel approaches for developing anti-TB drugs by preventing the maturation of the proteasome,” said Li.

To be degraded, a protein substrate has to pass through an opened gate in the proteasome and reach an interior chamber where protein carving occurs. The researchers determined how the TB proteasome keeps the entrance to the protein-cleaving chamber shut.

“The fully constructed proteasome is literally a death chamber for cellular proteins, so the passage to the chamber has to be safely closed, and open only when necessary,” Li said.

But the catch is that human cells have a similar proteasome to degrade unwanted proteins in “recycling factories.” This protein-recycling system is essential for human survival and would be destroyed if an inhibitory drug were not specific to the bacteria. Therefore, finding the differences between the human and the bacterial proteasome systems is critical to designing novel anti-TB agent.

Using x-rays as probes at the NSLS, Li, with colleagues from BNL and New York University’s School of Medicine, showed a key difference in the way human cells and Mycobacterium tuberculosis bacteria deliver unwanted proteins, marked with a “kiss of death” sequence to their respective cellular recycling factories. Human cells use a different marker protein and a completely different mechanism for drawing doomed proteins into the proteasome. Thus, TB therapies with a specific target, as identified in the earlier study, would not endanger the essential interactions of the human proteasome.

Li earned bachelor’s and master’s degrees in physics from Wuhan University in Hubei, China, and a Ph.D. in electron microscopy and crystal structure from the University of Science and Technology in Beijing, China. He joined Lawrence Berkeley National Laboratory in 1994 as a postdoctoral fellow, became a project scientist in 1998, and received the laboratory’s Outstanding Performance Award in 2001. He came to Brookhaven Lab in 2002, and he has been on the faculty at SBU since 2007.