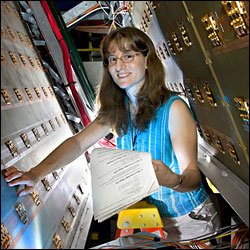 A clarinetist, bassoonist, and a nuclear physicist at Brookhaven’s Relativistic Heavy Ion Collider, Christine Aidala discusses her love of music and proton spin in a Q&A posted last week on the U.S. Department of Energy’s Energy Blog.

At RHIC, Aidala — a scientist from Los Alamos National Laboratory — is exploring proton spin, a puzzling quantum property that describes a particle’s intrinsic angular momentum. Like charge and mass, it’s part of a particle’s identity, whose magnitude is the same for all particles of a given type. But unlike charge and mass, spin has a direction that can be oriented differently for individual particles of a given species. Yet despite the fact that proton spin is used in everyday applications like magnetic resonance imaging (MRI), exactly how — and how much — the individual particles that make up protons contribute to spin remains a mystery.

Aidala describes her work in this field, as well as her favorite musical composition, in Energy Blog’s new series, “10 Questions.”