Pumping up the Polarization of Protons for RHIC

The competition may have been slim, but the feat was great. With custom-built power supplies built from old inventory and 1960s quadrupole magnets pulled from storage, Brookhaven Lab’s Alternating Gradient Synchrotron (AGS) can now provide researchers with five to eight percent more protons that are polarized — breaking its own world record set in 2009 for the highest polarization, energy, and intensity beams at BNL’s Relativistic Heavy Ion Collider (RHIC). 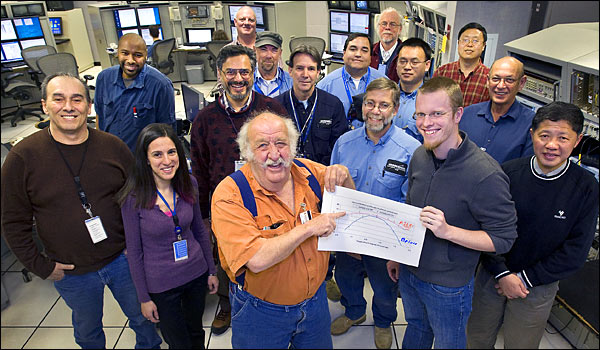 In the quest to understand how the universe works by looking at the smallest subatomic particles, RHIC is the only machine in the world that can smash protons that are polarized — spinning in the same direction. Before reaching 99.9 percent the speed of light at the RHIC demolition derby, these tiny particles travel approximately one million miles through a series of linear and circular accelerators, including the AGS, to get up to speed and reach RHIC. With the new upgrade, the AGS can now keep up to 75 percent of those particles in the beam polarized while they accelerate.

“The enhancement from the new AGS quadrupoles is amplified in RHIC measurements of spin sensitivity, so an eight percent relative beam polarization improvement can reduce the time needed to reach given data quality by as much as 36 percent,” said Associate Lab Director for Nuclear & Particle Physics Steven Vigdor. “These improvements significantly advance our ability to unravel how quarks and gluons contribute to the proton’s intrinsic spin.”

“Most polarization is lost in the AGS,” said Vincent Schoefer, this year’s AGS Run Coordinator, who is responsible for the AGS’s performance during the ongoing RHIC Run 11. “Polarization figures strongly into what makes RHIC unique, so even a five percent increase counts.”

Home to three of BNL’s seven Nobel Prize-winning discoveries, the AGS is a circular accelerator more than half a mile around. This synchrotron is made up of 12 sections, labeled A through L, each containing 20 different magnets. Alternating, opposing magnetic forces focus or defocus the beam particles — hence the name “Alternating Gradient Synchrotron” — steering the particles on their way to RHIC.

Accelerating polarized protons typically wobble and become less polarized as they complete approximately two million laps in the AGS. Woody Glenn, a physicist in BNL’s Collider-Accelerator Department (C-AD) who has worked at the Lab for more than 50 years, led the project to limit this wobble and increase the percentage of protons that reach RHIC spinning in the correct direction.

To minimize inherent proton-wobble problems, the Jump Quad system required custom-built power supplies and two quadrupole magnets to be installed in AGS’s I and J positions. As the particles race through the AGS, two of the customized power supplies quickly pulse, hold, and pull back surges of power for each of the quadrupoles in a matter of milliseconds. Forty-two times within half a second, these pulsed currents produce magnetic kicks that keep the particles spinning in the correct direction.

“I don’t know what it would have cost to buy new equipment, but it would have been a million dollars or so, and we didn’t have a lot of money,” Glenn explained. “So we did it with parts that we pulled out of the junkyard.” 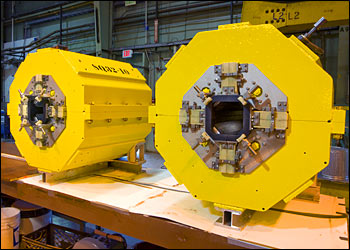 The two refurbished quadrupole magnets before being installed at the AGS.

Glenn scrounged power supplies from the Lab’s previous g-2 experiment and decommissioned beam lines, and the two quadrupoles he needed sat in a scrap pile waiting for disposal. Built in the 1960s, the magnets were previously used at the AGS. Unlike many modern magnets milled from one solid block, these were assembled from a thousand thin layers laminated together — a design by BNL retiree Gordon Danby, who with retiree James Powell held the earliest patents for Maglev technologies. Glenn realized that the magnets could be pulsed because they were laminated, and he designed a way to shim the layers for the correct geometry.

The quadrupoles were scrubbed, scraped, painted, and outfitted with new coils and shims. The Lab’s Superconducting Magnet Division tested the first prototype before the installation.

“We couldn’t just turn this on and have it work,” added Glenn. “Commissioning this unique system required help from a large group, including Run Coordinators Haixin Huang and Vincent Schoefer, Lead AGS Physicist Leif Ahrens, and our physicists, programmers, and the operations staff at C-AD for more than a year.”

“This AGS upgrade to increase the proton polarization for RHIC was truly a tour-de-force achievement that only could have been done with tremendous amounts of know-how, resourcefulness, and teamwork. Congratulations to everyone who was involved,” said Roser.

Glenn, Schoefer, and their team in C-AD do not consider this case closed just yet. As they continue to adjust the timing for when the quadrupoles pulse and better control the particles’ orbit, they hope to increase the polarization of protons produced for RHIC again — and set the next world record for BNL.