Alina Ranjbaran, a junior at Garden City High School; Andrew Rosen, a senior at Half Hollow Hills High School West; and Sahir Raoof, a senior at Jericho High School, have won an all-expense-paid trip to the Intel International Science and Engineering Fair in Los Angeles, to be held May 8-13. At that contest, they will compete for a chance to win the top prize — a $75,000 scholarship. 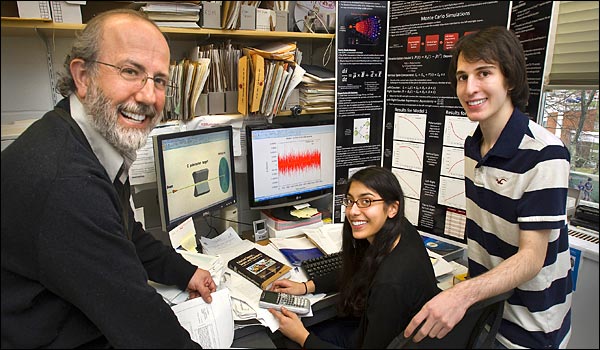 Ranjbaran and Rosen qualified for the prize by taking first place in the 2011 Long Island Science and Engineering Fair and Raoof came in first in the New York State fair. In addition, Raoof has won numerous other distinctions, including placement as a semi-finalist in the 2011 Intel Science Talent Search, winning a $1,000 scholarship. 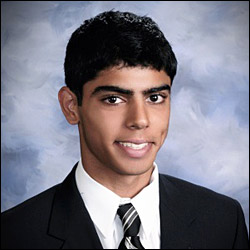 Rosen first came to BNL as a participant in the Office of Educational Program’s Community Summer Science Program two years ago, and last year, worked with Semertzidis as a student in the High School Research Program. Ranjbaran and Raoof came to BNL through recommendation by advisors in their schools.

Semertzidis says he is rewarded for his efforts in mentoring the students by seeing “the huge difference in their attitude,” as well as their understanding of science as their learning progresses. “They have become less inhibited — more confident about asking questions and moving forward with their research independently,” he said.

Specifically, the students worked on determining the most efficient way to collect data in the proposed Proton Electric Dipole Moment Experiment. Scientists theorize that matter and antimatter were created in equal quantities immediately following the Big Bang. However, an asymmetry developed that can be explained by a violation of the fundamental combined symmetry of charge and parity. James W. Cronin and Val L. Fitch, performing an experiment at Brookhaven’s Alternating Gradient Synchrotron, discovered this asymmetry — known as CP violation — in 1963, and they won the Nobel Prize in Physics for their discovery in 1980. However, this asymmetry is not enough to explain the matter-antimatter asymmetry of our universe. More is needed, and if the proton-electron dipole moment is discovered in the BNL experiment, this new research could fill that void.

In the proposed experiment, physicists will search for this asymmetry in polarized protons injected into a still-to-be-developed storage ring with a polarization-determining internal polarimeter. The polarimeter will monitor the proton spin as a function of storage time. Finding an electric dipole moment — a measure of the separation of positive and negative electrical charges — along the direction of the proton spin would be evidence that asymmetry exists.

Ranjbaran and Rosen generated computer simulations of the behavior of protons in the proposed experiment. They focused on optimizing data collection, which, if done most efficiently, can save millions of dollars for the experiment.

Raoof worked with Semertzidis during the summers of 2009 and 2010. The first year, he determined how Earth’s magnetic field would interfere with the electric field in the Proton Electric Dipole Moment Experiment to produce a subtle systematic error, and he found ways to get around it. Last summer, he worked on metallic plates that generate an electric field in the experiment, with the goal of determining, among others, whether stainless steel or titanium plates are the best. He is still working on the project.

While it is still too early for Ranjbaran to decide what college she will attend, she knows that she would like to pursue her studies of both science and music. She plays the violin and piano. Of her time at BNL, she said, “I especially enjoyed the informal ‘cookies and tea’ time in the Physics Department, when I could interact with scientists, and I liked to attend the colloquia. Dr. Semertzidis’s teaching was the perfect combination of being helpful and letting me make my own mistakes.”

Rosen, who plans to attend Tufts University in the fall, agreed with that assessment, saying Semertzidis was “very helpful, allowing me to be 99 percent independent, after explaining the experiment. If necessary, he would explain things again and again and again, and I’d gain at least five percent more knowledge with each explanation.”

“Working on an experiment at Brookhaven Lab was an amazing experience,” Raoof said. “It’s the biggest physics hub on the East Coast of the United States. I appreciate that Dr. Semertzidis spent so much one-on-one time with me, teaching me advanced math and physics.” Raoof is interested in studying biophysics in college. He has been accepted to Columbia University and the Massachusetts Institute of Technology, and is awaiting word from Harvard before he makes a decision about the college he will attend.