What do sheep in New Zealand have in common with unexploded ammunition on US military firing ranges? They have both been the target of BNL Environmental Research and Technology Division scientist Sudeep Mitra’s research into technology using neutron time-of-flight to determine the composition of various materials. 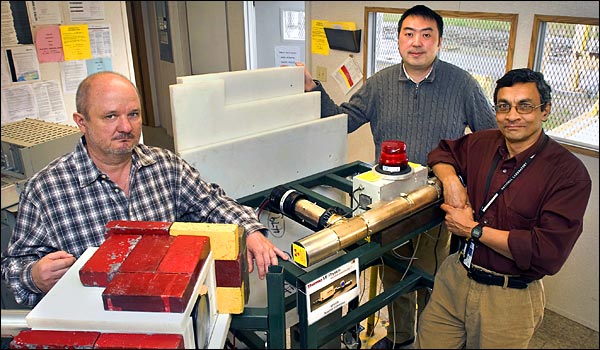 Under its Strategic Environmental Research and Development Program, the Department of Defense (DoD) recently awarded a three-year grant to Mitra and his colleagues at BNL and Stony Brook University to develop a field-deployable instrument that will help identify unexploded ordnance (UXO) at its more than 1,600 firing ranges in the United States — without detonating the explosives. The instrument would use Associated Particle neutron Time-Of-Flight technique (APnTOF) to measure the ratios of carbon, nitrogen and oxygen in objects left on the firing ranges.

The technology is not new to Mitra. He used it some 20 years ago to help ranchers in New Zealand track the progress of genetic manipulations to breed sheep with more meat and less fat without slaughtering the animals. And this same technology may one day lead to advances in the detection of breast cancer in humans.

Thousands of Pieces of Unexploded Ammunition

One of the major problems facing the DoD is dealing with unearthed UXO at past or present military facilities or munitions testing grounds. The basic concept is to locate potentially unexploded ordnance in the soil using conventional ground penetrating radar techniques and magnetometers, which will identify metal objects but not discriminate whether they are a very dangerous UXO or a benign rusty pipe. The Associated Particle neutron Time-Of-Flight technique can be used to examine the object in situ without disturbing it and, based on its chemical composition and ratio of specific elements, determine whether it is a dangerous UXO.

“At the firing ranges where the US military trains, they fire a lot of different kinds of ammunition,” Mitra said. “Ten percent of them don’t explode as expected, and although they have color codes for different ammunition, they quickly rust and the color codes disappear.

“When they are practicing, quite often they don’t use high explosives in the fillers of these rockets or bullets,” he said. “They could be filled with water or even sand. But you don’t know if it’s high explosive or if it’s just a practice round. So if it is suspicious, they have to call in the technicians and they blow it up in place at a cost of $600 for each piece.”

Since handling every piece of ordnance as “live” greatly increases disposal and remediation costs to the DoD, improvements are needed in the technologies for identification and discrimination of UXO to reduce false alarms.

Carbon, nitrogen and oxygen are the main elements present in high explosives, as well as in sheep and other common objects like newspapers. Mitra’s technique uses an electronically collimated tagged neutron beam from a novel compact, portable field-deployable 14.1 MeV neutron-generator system to simultaneously provide 3-D imaging of objects and their elemental composition.

“That neutron will take a certain time to reach the object in question, since these velocities are very well known. So the distance to the object can be determined with time-of-flight spectra, and signals which are uniquely characteristic of particular elements in varying ratios provide information on the composition of the object. For example, if an object is suspected to be a high explosive, its location can be pinpointed using the time spectrum, and the ratio of corresponding gamma rays and spectrum patterns can determine what it contains.”

Mitra said the technology’s main advantage over its predecessor technique is its suppression of the unrelated background signal by imposing conditions on the data-acquisition system.

“We will undertake experiments to demonstrate the APnTOF’s efficacy under various field conditions for both characterizing munitions types from their elemental composition, and also discriminating hazardous UXO from non-hazardous items among the clutter,” he said. “Finally, a portable version will be developed and tested in the field.”

The collaboration between different directorates and Stony Brook University brings together a unique combination of expertise. Mitra, the project PI, works in the Environmental Sciences Department within the Environmental and Life Sciences Directorate. Istvan Dioszegi of BNL’s Nonproliferation and National Security Department in the Global and Regional Solutions Directorate, uses techniques to detect neutrons, while Yu Zhou. an assistant professor of robotics at Stony Brook, will develop decision-making algorithms for UXO identification using the gamma ray spectra of different materials. BNL’s Instrumentation Division and microelectronics group will help develop the compact field-deployable signal processing system.

Mitra was already familiar with the technology, having used it in the 1990s at the beginning of his research career. “The idea has been there for the last 40 years from nuclear physics experiments,” he said. “We were one of the first to apply it using a compact neutron generator when I used it to determine the body composition of sheep in New Zealand in terms of protein, fat and water. In NZ, their meat is a very big export item and they put the sheep through different genetic manipulations so they can get more meat and less fat. But they had to slaughter a lot of these animals to do a chemical analysis, “ he said.

“So we proposed this non-destructive technique so we could follow the sheep as it grows. Again the important thing is the ratio of carbon, oxygen and nitrogen. Protein very characteristically contains nitrogen.”

Mitra said the system can be easily modified for applications in homeland security, non-proliferation, and carbon-sequestration. Another potential application could be for early diagnosis of breast cancer. Changes in the elemental concentrations of certain marker elements in breast tissue could be measured with high precision at very early stages. Present screening mammography requires that an abnormality be in an advanced stage of development with limitations in classifying them as benign or malignant.

Mitra predicted that the current neutron interrogation technology being pursued by the DoD had a poor signal-to-noise ratio and will likely be made obsolete once his results are in.

“There’s been no alternative technology in the last 10 or 15 years so they stayed with the conventional system,” he said. “With ours, we can really see through objects that are in the way. The beauty of this technique is the fact that it provides both elemental analysis and 3D imaging at the same time. You get a picture of the concentrations of carbon oxygen and nitrogen.”