Scientists working at NSLS are investigating a material that may lead to greatly improved tires for cars and other vehicles. Their study is an example of how incorporating nanoparticles into a regular substance can produce a material with superior properties — in this case, increased durability and heat resistance. 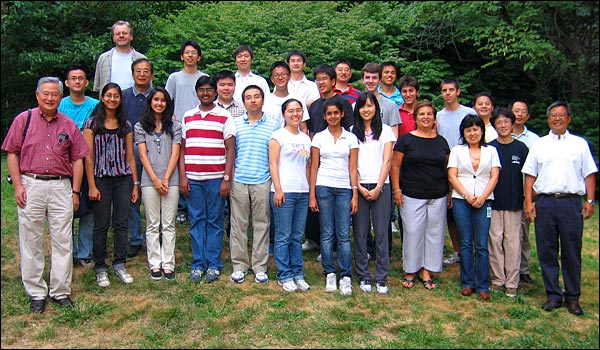 The research team, which includes scientists from Stony Brook University and Exxon Mobil, focused on a material that could serve as the inner polymer lining of tires. At NSLS, they used x-rays to investigate how incorporating nanoparticles of a chemically modified clay material into a very thin layer of a polymer may achieve tires that last longer than those currently on the market.

“By enhancing the properties of the polymer, there could be significant improvements in tire performance and significant savings in gasoline consumption, perhaps up to 30 percent,” said Stony Brook scientist Ben Hsiao, who led the study.

In particular, the researchers wanted to find out how adding the nanoparticles would affect the polymer film's gas permeability — that is, how well (or poorly, in this case) molecules can pass through it. Gas permeability is one way to gauge how a material will hold up over time.

They learned that the combination of the particles' shapes and the varied ways they orient within the film create a “tortuous pathway” for permeating molecules, causing them to zigzag through the film. As a result they have to travel a longer distance over a longer period of time to cross it. 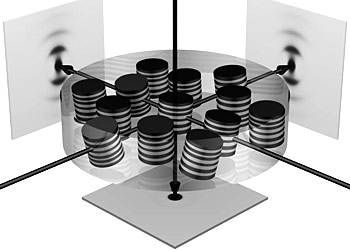 Two-dimensional x-ray scattering images of vertically oriented cylindrical nanoparticle stacks (left and right) in the polymer film, and a corresponding rendering of the particles

The group introduced different concentrations of clay nanoparticles into several polymer film samples and studied each sample using both x-ray scattering at NSLS beamline X27C and electron microscope imaging. In combination, these techniques allowed them to see, in detail, how the particles are distributed in the films.

They discovered that the particles take on two shapes, cylindrical stacks and platelets, and position themselves in two ways. Some particles settle horizontally within the polymer film, forming layers within it, and others are oriented perpendicularly to the film.

Further, the group found that how the particles become incorporated into the film is dependent on how the film is processed. When the films are created using a process called melt pressing, the particles tend to be cylindrical and orient themselves parallel to the layers of the film. This effect was more pronounced when the researchers increased the density of particles, which, they propose, seems to be because the particles do not have the space to orient themselves in other ways.

The x-ray analysis also showed that the particles were evenly distributed in the film. They did not tend to clump, even as the fraction of particles by total weight was greatly increased.

This work, which was supported by the NSLS Industrial Research Program and funded by the National Science Foundation and Exxon Mobil, is published in the October 15, 2010, edition of the journal Polymer.