About 75 scientists, clinicians and support staff attended the first Stony Brook University (SBU) — Brookhaven National Laboratory (BNL) Research Networking Day held at Stony Brook University Medical Center on May 13. The goal of the gathering was to foster future biomedical research collaborations between the two institutions to develop new treatments and technologies that may benefit patients. 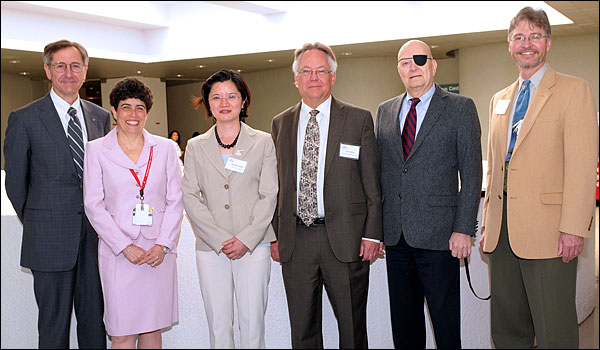 The morning event began with remarks from SBU and BNL leaders, followed by a networking breakfast where scientists from Brookhaven and clinicians from Stony Brook discussed their research. Later, some of the participants viewed and discussed the SBU and BNL research that was the focus of 15 posters displayed in the Stony Brook Medical Center lobby.

“Scientists at both Stony Brook and Brookhaven perform critical research,” said Sharon Nachman, associate dean for research and professor of pediatrics at SBU, who was instrumental in conceiving and organizing the event. “This gathering provides opportunities to form new collaborations that might jumpstart the creation of new treatments or medical technologies. We also would like the public to be invested in the research, so we are displaying the posters in the lobby for the entire weekend.”

In opening remarks, SBU Senior Vice President of Health Sciences and Dean of the School of Medicine Kenneth Kaushansky spoke of the opportunities for turning “scientific potential into realized progress in biomedicine" by combining the expertise and facilities available at both SBU and BNL through collaborations to further research. He indicated that leaders at both institutions have been meeting over the last several months to explore biomedical research programs and institute such collaborations.

BNL Deputy Director for Science and Technology Doon Gibbs explained to the participants that the “possibilities for collaborations and for breakthroughs are really high.” He mentioned that there are 20 joint appointments between SBU and BNL, as well as several joint institutes, including the Advanced Energy Center, the New York Center for Computational Sciences, the Joint Photon Sciences Institute, and the Center for Science and Technology. He added that there is a new push to commercialize technologies discovered at BNL, and collaborations between SBU and BNL can help to move research “from discovery to deployment.”

SBU Vice President for Research John Marburger, who is also a physics professor at the university and was a former director at BNL, spoke of the need for action. “The kinds of programs that we envision require individual researchers to participate,” he said. “We can’t do it all from the top down. Today you can see what opportunities exist for you.”

OTLIR Assistant Director for Life Sciences Jennifer Hsieh, said, “It’s great to bring clinicians and scientists together to carry on a common vision of creating technology for medical applications. It’s important to leverage the expertise from both institutions for the most productive outcome.”

And OTCP Manager Walter Copan suggested, “Sometimes new collaborations can find new sources of funding for research.” He added that BNL has many biomedical technologies under development or ready for licensing, including new applications for pharmaceuticals.

From Bench to Bedside

The posters on display featured aspects of translational medicine, which has the goal of bringing scientific discovery from the bench to the bedside. The research poster titles were varied, including findings and/or technologies related to diagnosing or treating addiction, brain aneurysms, brain tumors, cervical cancer, head and neck cancer, and obesity, among other health-related findings.

In their poster called “Brain Imaging and Obesity,” BNL’s Gene-Jack Wang and Peter Thanos described their findings after examining the brain chemistry and metabolism of both obese human subjects and those of normal weight. Over the course of many studies using various medical imaging methods, including positron emission tomography, they determined that compulsive overeaters share many of the characteristics of drug addicts, including significant changes in the signaling of dopamine, a brain chemical associated with pleasure and reward.

SBU’s Miriam Rafailovich and Rafael Davis displayed a poster titled “Optimizing the Treatment of Neuropathies and Targeting Tissues with Botox Injections,” in which they described a noninvasive technique to measure the movement in facial skin, which is attached to muscles. The technique can effectively be used to pinpoint when and where wrinkles will appear and therefore can be used to determine the optimum dosage of BOTOX injections, and monitor them. Also, it is useful for treating nerve disorders such as Bell’s palsy and acoustic neuroma, a benign tumor of the nerve that connects the ear to the brain, as well as monitoring recovery after facial surgery.