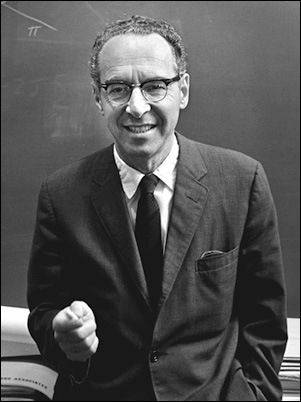 Maurice Goldhaber, a prominent physicist and a former director of Brookhaven National Laboratory, died on May 11 after a short illness.

Goldhaber had celebrated his 100th birthday on April 18, 2011. He was born in Austria, and earned his Ph.D. in physics at Cambridge University in 1936. In 1938 he came to the U.S. as a faculty member of the University of Illinois. He joined Brookhaven National Laboratory in 1950, along with his wife, the late nuclear physicist Gertrude Scharff-Goldhaber. At Brookhaven Lab, he served as chair of the Laboratory’s Physics Department from 1960 to 1961, and as Laboratory Director from 1961 to 1973.

Goldhaber’s research in the fields of nuclear physics and fundamental particles included experiment, systematics, technique, and theory. He made numerous significant contributions that helped to establish parts of the theory of subatomic physics now known as the standard model. In 1934, with James Chadwick from the Cavendish Laboratory at Cambridge, he was the first to measure accurately the mass of the subatomic particle known as the neutron, showing that it was not a compound of a proton and an electron as was believed at the time, but a new particle. In addition to measuring the mass of the neutron, he contributed to the discovery of the nuclear photo-effect, the role of spin in nuclear reactions, observing the helicity of the neutrino, and a wide variety of additional physics research.

As Laboratory Director, Goldhaber instigated and presided over an extraordinary period of scientific productivity at Brookhaven. Research during his tenure resulted in major discoveries in physics, three of which eventually garnered Nobel Prizes. Medical research that indicated the role of sodium in the development of hypertension and the value of the drug L-dopa to treat Parkinson’s disease was also conducted at the Laboratory during that time.

Goldhaber retired in 1985, but he continued his research at the Laboratory until he was well into his 90s. He told those who saw him working long hours in his later years, “I don’t have time to age.” To acknowledge his significant contributions to physics and Brookhaven Lab, he was named Distinguished Scientist Emeritus at the Laboratory after his retirement.

Brookhaven Lab Director Sam Aronson said, “Maurice Goldhaber was a valued friend to the Lab community. His insight, intellectual curiosity, and wit will be sorely missed, but the influence he had on the Lab remains.”

For many years the Harvard Physics Department has awarded annual prizes to distinguished graduate students in the names of Gertrude and Maurice Goldhaber. In 2001, Brookhaven Lab created the annual Gertrude and Maurice Goldhaber Distinguished Postdoctoral Fellowships at Brookhaven Lab. In 2008, the Lab held the “Neutrino Helicity at 50” symposium to celebrate the half-century-old Goldhaber-Grodzins-Sunyar experiment on neutrino helicity, a landmark among elegant table-top experiments that had a major impact on particle physics. In 2009, Magdalene College, Cambridge University, established the Maurice Goldhaber Prize for Natural Sciences or Mathematics, in honor of alumnus Maurice Goldhaber, and in 2011, the University of Illinois Physics Department established a graduate student prize in his name.

Goldhaber’s productive career has won him numerous awards, including the Tom W. Bonner Prize in Nuclear Physics in 1971, the J. Robert Oppenheimer Memorial Prize in 1982, the National Medal of Science in 1983, the Wolf Prize in Physics in 1991, and the Enrico Fermi Award in 1999.

From Martin Blume of the Physics Department, a former BNL Deputy Director and retired editor-in-chief of the American Physical Society: “Maurice was a unique icon in the annals of physics. I was happy that I had the opportunity to learn so much from him, particularly during our discussions on physics and many other matters when I drove him to BNL (his house in Bayport was a short distance from mine in Sayville). This lasted nearly a decade, and was a most interesting time, although he became more frail (but his mind didn’t) as time went by. It was good that he made it to his 100th birthday.”

From Peter Bond, Senior Advisor to the Director: “I fondly recall my interactions with Maurice over the years, which began with my visit to BNL in 1972. I greatly enjoyed his reminiscences of interactions with the physics greats of the early 20th century. One of the greatest compliments I heard about his science was from Nobel Prize recipient Georges Charpak, who described the neutrino helicity experiment as the most beautiful experiment he knew. Perhaps as impressive to me was his broad knowledge of science in many fields that allowed him to ask penetrating questions and to come up with creative new ideas in many of those areas. Coupled to his continual creative ideas were his famous quips — one I have come to particularly appreciate is ‘Physics teaches old things to new people.’”