46 BNLers Recognized for Perfect Attendance in 2010

Laboratory Director Sam Aronson, with Robert Kelly of the Human Resources and Occupational Medicine Division, congratulated 46 BNL employees on their excellent records of “Perfect Attendance” during 2010 at a ceremony held in Berkner Hall on April 25. 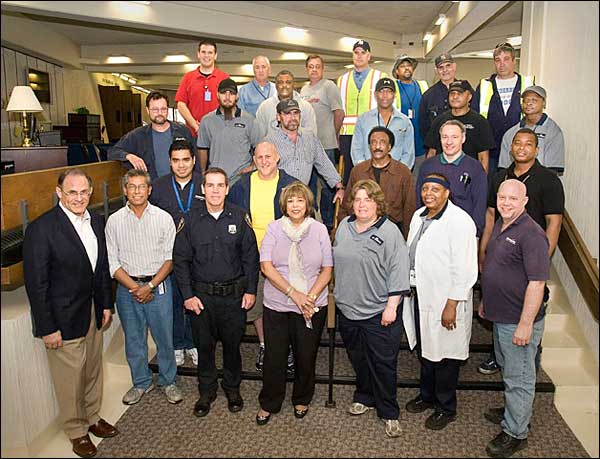 Each winner received a check for $200 minus tax, a certificate, and a T-shirt with the number of years of perfect attendance the winner achieved. The annual event is held by BNL in recognition of the commitment and service provided by full-time employees on the technical and clerical schedules who used no sick leave during the previous calendar year.

The Perfect Attendance award was first given in 1992, when full-time employees on the technical and clerical schedules were recognized for having used no sick leave during 1991. In 1995, these employees and those from the Paper, Allied-Industrial, Chemical & Energy Workers International were joined in eligibility for the award by BNL employees represented by the International Brotherhood of Electrical Workers. In 1998, members of the Suffolk County Security Police Association in the Safeguards & Security Division also became eligible for the prize.