Hair breaks. It singes. It falls out. It might not be the strongest feature of living human bodies, but hair is one of the best-preserved tissues of dead ones, providing a record of diet, age, metabolism, and sometimes, even the cause of death.

With intense beams of x-rays at Brookhaven's National Synchrotron Light Source (NSLS), a team of researchers is using hair samples collected from the decomposed bodies of two 15th-century Italian royals to determine how they really died.

Ferdinand was once King of Naples. His death followed a bout with recurrent fever, malaise, fatigue, and bloody diarrhea. Isabella, the Princess of Naples and Duchess of Milan, is thought by some to be the subject of Leonardo da Vinci's Mona Lisa. She suffered from recurrent fevers and malaise, and died with dropsy, a general swelling of the body.

There's a common link between the Aragons' late lives: both were treated with mercury — a cure-all skin disease remedy of the 15th century used to care for everything from itch to ulcers. It's also a neurotoxin that's especially harmful to the nervous system. 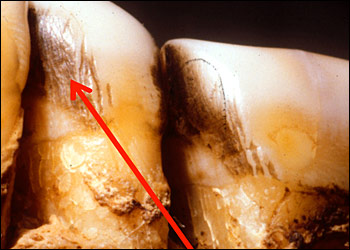 Historical accounts suggest that Ferdinand was using the heavy metal to treat syphilis. And based on Isabella's blackened teeth, researchers can tell that she also received mercury treatment.

But were they exposed to enough mercury to kill them?

That's where a team of international researchers comes in. Almost 500 years after Isabella and Ferdinand died, scientists from the University of Chicago, University of Turin, University of Pisa, University of New Mexico, Academic Teaching Hospital München-Bogenhausen, and the New Mexico Health Enhancement and Marathon Clinics Research Foundation obtained strands of the royals' hair to study. They presented their research last week at the 7th World Congress on Mummy Studies in San Diego.

Hair is continuously renewed during life, normally growing about 16 cm per year. Using beams of x-rays at NSLS just five microns in diameter — about the size of a dust particle — the researchers were able to look for heavy metal exposure in Ferdinand and Isabella's hair. The extremely small size of the x-ray beam allowed the researchers to zoom in on sections of the strands with a resolution equivalent to just 15 minutes of hair growth. 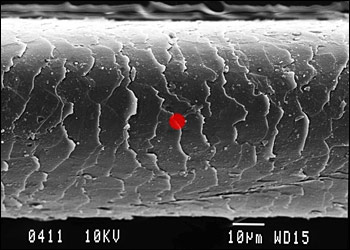 To get an idea of just how small five microns is, take a look at this image of a strand of hair. The red dot measures five microns in diameter.

They found elevated levels of mercury in Isabella's hair, ranging from 10-50 parts per million (ppm), within 20 days of her death. In the 15 days leading to Ferdinand's death, sky-high levels of mercury were present in his hair, ranging from 50-20,000 ppm. In comparison, the World Health Organization (WHO) places the level at which toxicity occurs at 50 ppm of mercury in hair. With a safety factor of 10 applied, WHO advises that members of the general public should have no more than 5 ppm of mercury in their hair.

The researchers also tested samples of muscle from Ferdinand and bone from Isabella for common diseases of the time period. Immunoassays showed that they tested negative for malaria. But they were positive for visceral leishmaniasis, a parasitic disease spread by sand flies that can cause skin ulcers in immune-suppressed subjects and, when left untreated, potentially fatal damage to many organs.

X-ray fluorescence studies at NSLS showed researchers the concentration of zinc (top) and mercury (bottom) in strands of hair from Isabella and Ferdinand's bodies. Isabella's hair is positioned above her brother's. The hair roots are on the left. Red coloration is associated with the highest levels of mercury.

The researchers concluded that the potential skin lesions, often associated with leishmaniasis, were treated with large amounts of mercury. This could have led to mercury intoxication, which weakens the immune system. Although the exact role of mercury's toxicity in the early deaths of the royals remains to be determined, an overdose of the metal could have opened a door for latent infections, such as leishmaniasis, to turn deadly.