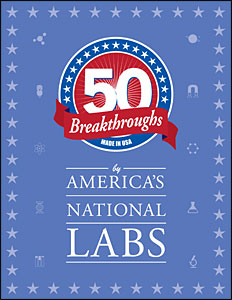 They brought the web to the United States, helped map the universe (and the moon), built better buildings, and conceived new cancer therapies. The Department of Energy’s nationwide network of laboratories has been instrumental in revolutionizing how humans conceive of the universe, in form and function, for more than 80 years.

DOE’s 17 national laboratories worked together to compile a sampling of these discoveries in a new brochure called “50 Breakthroughs by America’s National Labs.” Contributions included from Brookhaven’s past and present research showcase the diversity of the Lab's basic and applied scientific accomplishments. From the astronomical to the near-invisible particle, they include: the development and commercialization of technetium-99, which transformed the field of medical imaging; the pioneering of ultra-efficient power lines with superconductors that lose none of the energy they relay; the development of a technology that uses the attractive and repulsive forces of magnets to lift and pull the Maglev trains that even now are carrying commuters in China past the din of traffic jams; and providing astronomers with a topographical view of what the universe looked like 11 billion years ago, when the first galaxies were just beginning to form themselves into clustering clouds of matter.

Read about these breakthroughs (pdf) and more.