Brain Iron as an Early Predictor of Alzheimers Disease 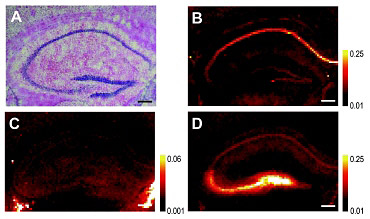 (A) Light micrograph of a stained hippocampal brain section from a mouse. XFM images: iron (B), copper (C), and zinc (D) in the same tissue section. Units are mM. Scale bar = 300 µm

Early and correct diagnosis of Alzheimer’s disease (AD) is important for reasons that go beyond treatment. These include more time to make critical life decisions, planning for future care, and maximizing the safety of the person with Alzheimer's disease and their family. New scientific information relevant to this pernicious disease has been obtained by researchers utilizing the U.S. Department of Energy Office of Science’s Advanced Photon Source (APS) at Argonne National Laboratory and National Synchrotron Light Source (NSLS) at Brookhaven National Laboratory, and published in the journal NeuroImage. This work points to the use of elevated brain iron content, already observed in late-stage AD, as a potential tool for early diagnosis. Since the disease is usually diagnosed only in later stages after cognitive symptoms appear and treatment may not be effective, a method for early detection would be a major breakthrough in fighting this debilitating neurological illness.

It has been known for some time that the formation of amyloid plaques in brain tissue is associated with AD. These plaques may form for years before the patient actually suffers neurological symptoms. So, much recent research has focused on finding a way to detect the disease in its very early stages when treatment would be most effective.

One line of research has centered on the observation that the brains of patients in late stages of the disease showed elevated levels of metal ions such as iron, copper, and zinc. Measuring metal concentrations in cerebrospinal fluid or using magnetic resonance imaging would be an attractive technique for early diagnosis because it is noninvasive. Until recently, however, not much was known about how metal ions were distributed in plaque and non-plaque tissues during various stages of the disease.

Now, thanks to the efforts of the researchers from Stony Brook University, Brookhaven, the University of Chicago, the Illinois Institute of Technology, and Argonne, new light has been shed on the relationship between metal content, plaque formation, and Alzheimer’s disease.

The scientists used a model system of amyloid plaque formation in mice to investigate how iron was distributed in the brain cortex and hippocampus over time. The cortex is the center of higher brain functions such as thought and reasoning, while the hippocampus is important for long-term memory storage. Malfunction of both of these brain regions is associated with AD, though the hippocampus appears to be the first and most drastically affected.

The x-ray fluorescence microscopy (XFM) technique employed at the APS and the NSLS allowed the researchers to determine how iron content changes as the diseased brain ages. Their results show that iron content is significantly higher in the cortex early in the disease and that it corresponds with the onset of plaque formation; interestingly, the iron was not found within the plaques.

Given these findings, it is clear that quantifying brain iron content could be a powerful early indicator of AD and has great potential as a diagnostic tool.

Lisa M. Miller, biophysical chemist at the NSLS and Stony Brook University, recalls how the project came into being: “About eight years ago, we used XFM to analyze the plaques of end-stage human Alzheimer’s disease and found the plaques to be loaded with iron, copper, and zinc. So we wanted to know whether metal ions were involved in plaque formation and/or brain cell toxicity. To do this, we needed the mouse model to study metal accumulation in AD plaques over the course of the disease. Interestingly, we found that the mouse plaques never accumulated metal, except for a small amount of zinc in the late stages. These mice also exhibited very little brain cell death. This was in stark contrast to humans, where the plaques take up a lot of metal and brain cell death is significant.”

Having the right tools and techniques was critical to moving the work forward. According to Miller, “Access to synchrotron light sources such as the NSLS and APS, where we could employ XFM, was instrumental in this work because there is really no other way besides XFM to simultaneously image all of the physiological metals (calcium, iron, copper, and zinc) in the brain. We were able to use the NSLS to study the plaques, but needed the high brightness and small beams at the Bio-CAT 18-ID-D beamline at the APS to efficiently image the large cortex and hippocampus regions.”

Miller says that the team’s work “now leads us to question whether metals in the plaques are a sign of metal ion imbalance in Alzheimer’s disease, causing brain cell toxicity. Perhaps the ‘metallated’ plaques are even toxic themselves. Understanding this mechanism is our direction for the future.”