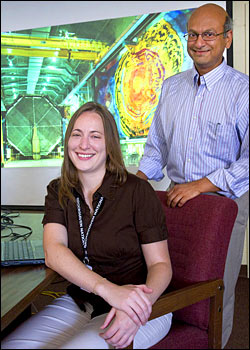 According to Milind Diwan, a group leader in BNL’s Physics Department, all three of these experiments are “cutting edge” and are closely associated. “Although there are some differences in design, data collection, and monitoring, all three experiments are studying a type of well-known but elusive particle — neutrinos,” said Diwan.

Whitehead has contributed to the development of Daya Bay, based in China, and conducted crucial studies of the potential physics performance of LBNE and been a key leader in analysis for MINOS, both based at Fermilab. “Lisa’s work has been shared with many of the scientists working on these projects around the world,” added Diwan.

Diwan said that when Whitehead first arrived at the Lab, her quiet demeanor kept him guessing. He wondered if she would actually deliver her work on time. “She never let me down. She not only delivered on time, but it was always high-quality work,” he said.

So, if you ask this quiet, hard-working scientist what she will remember most when she departs BNL in the near future to accept a faculty position at the University of Houston, she will tell you that her experience at Brookhaven has been very positive.

“I feel lucky to have had the opportunity to begin my career by working with so many talented people,” said Whitehead. “I am especially grateful to Milind and our entire team for the time and effort they spent mentoring me. I am also appreciative of the staff members of the Lab’s Diversity Office for their support and for being the first to welcome me to the Laboratory.”

Whitehead, who originally hails from Tennessee, received her Ph.D. in physics from Stony Brook University (SBU) in 2007. That same year, she joined BNL.

Chang Kee Jung, Whitehead’s Ph.D. advisor at SBU, recommended that Diwan consider hiring Whitehead. “I must remember to thank Professor Jung for that great idea,” said Diwan. “Lisa has been an asset to our team and a pleasure to work with. We wish her a happy future.”

Whitehead says that although she is leaving BNL to embark on a new career, she looks forward to continued collaboration on the Daya Bay experiment and other BNL-associated projects.

Note: Lisa Whitehead will give a talk, “Latest Electron Neutrino Appearance Results from MINOS,” at a Particle Physics Seminar on Thursday, August 11, 2011 at 3 p.m. in the small seminar room in Bldg. 510. The talk is hosted by BNL scientist David Jaffe.