With helicopters, soldiers, emergency vehicles, and a fictitious dirty bomb on site July 27, Brookhaven Lab looked more like the set for a new blockbuster action movie than a place where scientists are studying the origins of the universe and working on the nation’s energy challenges. 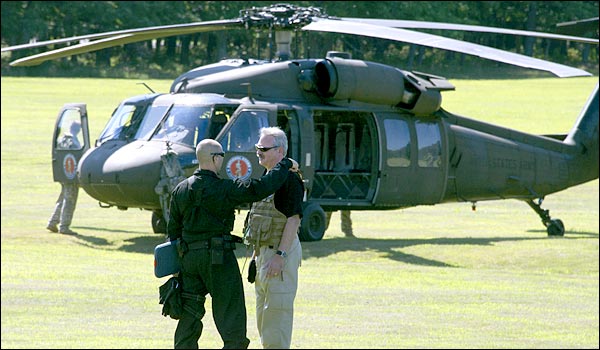 That morning, the New York National Guard's 24th Civil Support Team (CST) for Weapons of Mass Destruction traveled by air and expressway from Fort Hamilton in Brooklyn to BNL for a training drill conducted by the Radiological Assistance Program (RAP) that also included members of the DOE-Brookhaven Site Office, the Nonproliferation & National Security Department, Police and Fire and Rescue groups, the Office of Emergency Management, and Suffolk County Police Department Emergency Services.

More photos from the drill on July 27

The scripted situation for the drill involved a simulated dirty bomb containing radioactive contaminants exploding in an area southeast of BNL’s National Synchrotron Light Source II construction site. In the hours afterward, participants assessed the situation, characterized the radioactive materials from the “blast” and then responded using plume models and other tools.

“We hope that we won’t ever have to actually use what we practice, but with that being said, this drill went extremely well and everyone involved got something out of it,” said Lee Michel, training and outreach coordinator for Brookhaven’s RAP team.

“The real strength in these drills is bringing together multiple agencies to rehearse how we would execute in a real situation,” said Major Jody Lupo of the CST. “Our unit wouldn’t be anywhere near where it is today without the support we receive from the people at DOE and Brookhaven.”

The Brookhaven RAP team, which is responsible for the region that stretches from Maryland and the western border of Pennsylvania all the way up to Maine, will work with CST teams from Connecticut and Pennsylvania in the coming months.