About 50 entrepreneurs and investors attended an August 15 workshop at Brookhaven National Laboratory, offered with Accelerate Long Island, to learn about early-stage technologies invented by BNL researchers. As part of the Obama administration’s Start-Up America initiative, the Lab is offering start-up companies the option to license available technologies from its patent portfolio for $1,000 — a fraction of the usual cost — until December 15. 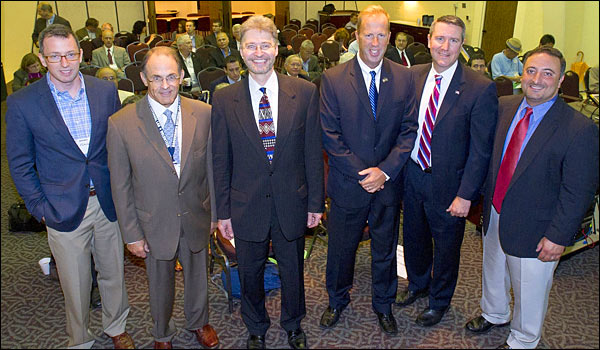 From Discovery to Deployment

Brookhaven Lab Director Sam Aronson welcomed the guests, saying the event was intended to bring together inventors and investors to “build a bridge from discovery to deployment.”

Long Island Association President Kevin Law told the audience, “All the technologies here today have the potential to make money and create jobs.” He characterized the event as a “preview” leading up to the “opening night” of the next upcoming Accelerate Long Island event on September 26. As part of Senator Chuck Schumer’s “Stay on Long Island” program, the second Accelerate Long Island event will be held at the Cradle of Aviation Museum in Garden City, featuring more technologies ready for commercialization.

Walter Copan, manager of BNL’s Office of Technology Commercialization and Partnerships (OTCP), which coordinated the event, introduced the speakers, who gave presentations on seven of BNL’s approximately 300 technologies available for licensing. The BNL technology showcase in association with Accelerate Long Island was intended to provide a “venture pitch” presentation of selected technologies and business opportunities, and to allow inventors and other BNL staff to meet directly with potential investors and entrepreneurial business leaders.

Copan explained that BNL has a leadership role in the Start-Up America Initiative with the U.S. Department of Energy (DOE) and developed the option agreement template that has now been adopted for use by all participating DOE laboratories. Companies interested in commercializing a BNL technology must provide a business plan to qualify for consideration for the special option program. The series of patented technologies invented at BNL and being made available to start-up companies are described on the BNL website www.bnl.gov/tcp.

When extremely large amounts of data — on the order of petabytes (1,000 terabytes, or one quadrillion bytes) — have to be transferred from one data center to another across multiple network domains, the process can be slow and unreliable if the same bandwidth is shared equally among multiple users. This can lead to serious consequences in time-sensitive data-sharing work, such as making trades in the financial market or monitoring scientific or health data.

Istvan Dioszegi, Nonproliferation and National Security Department, led a team that has developed separate detector systems useful in identifying explosive devices and nuclear materials. As described by OTCP’s Steven Wood, their semiconductor-based system detects explosives that can “see” the energy signatures of different elements in a target, which is important because explosives typically register characteristic ranges of elemental components. Most current detectors cannot determine whether a target is likely to explode without physical engagement. Bomb-sniffing dogs rely on detecting secondary vapor signatures of explosives, so placing the explosive in an airtight container can thwart such a solution.

The BNL-developed explosives detector does not have these limitations. Potential applications include detecting explosives, such as improvised explosive devices, landmines, or other unexploded munitions, on battlefields and other locations as well as inspection of cargo. Cargo inspection is an important use, since the U.S. is required to screen 100 percent of cargo containers coming to port from other countries but currently only screens from two to six percent of them.

The nuclear materials detector system uses a single pulse of high-intensity electromagnetic radiation to interrogate a target of interest. The newly devised detector uses less energy, emits less radiation, and determines the composition of a target more quickly than conventional detectors. It can be used to detect “dirty” bombs or nuclear weapons.

Conventional sulfur polymer cements (SPCs) are made by mixing sulfur, a byproduct of the petrochemical industry, with dicyclopentadiene, an expensive organic modifier. Consequently, the price of SPCs is relatively high, compared to hydraulic portland cements. Paul Kalb in the Environmental Sciences Department, together with partners, has devised an alternative concrete composition and method for making it through a process known as Stabilized Sulfur Binder using Activated Fillers (SSBAF).

The SSBAF method uses an organic component waste byproduct from the petrochemical industry, mixed with and coated on a filler, such as sand, before being energetically mixed with sulfur. Kalb explained that this “green” process recycles industrial byproducts and, unlike the process for making conventional concrete, does not produce carbon dioxide. This improved concrete is less expensive than those made with conventional sulfur polymer, is up to twice as strong as conventional portland concretes and conventional SPCs, requires no water, and is highly resistant to corrosive environments.

John Shanklin and his team in the Biology Department devised a way to alter the function of plant enzymes known as fatty acid desaturases to change the placement of double carbon bond position in fatty acids produced in plant seeds. Changing the desaturase enzyme’s function in such a way enables the engineering of enhanced oil-seed crops for industrial seed-oil feedstocks, biofuels, nutritional quality, and other plant-based oil products. OTCP’s Christine Brakel explained that modifying the chain length and position of the placement of double bonds of the soluble plant fatty acid destaurase and can change the types and amounts of oils produced by plants.

Thus, oilseed plants bearing specifically altered genes can be used to produce renewable stocks of agricultural oils to replace non-renewable petrochemicals that are used in a variety of processes, such as making nylon precursors. Other crops bearing altered genes could produce oils with increased nutritional value, or improved vegetable shortening and margarine with no trans fats.

Kalb presented another technology — a method he developed with his team at BNL to remove toxic mercury from soil in situ, or on site at the location where it is found in the ground. In this process, mercury is drawn to specially designed treatment rods that contain a sulfur-based reagent. The rods act as a “chemical magnet,” as the mercury migrates to the rods and reacts with the sulfur reagent to form a stable, insoluble mercury sulfide compound. When fully reacted, the rods can then be removed from the site for safe disposal at a hazardous waste facility.

This simple and reliable process significantly reduces waste handling required by ex situ methods and therefore lowers cost. Industries involved with mercury cleanup can use this in situ mercury stabilization process. It is especially useful for removing low concentrations of mercury over large areas.

Former BNL researcher Yang Qin and his colleagues at the Center for Functional Nanomaterials “cross-linked” the standard polymer used in these organic solar cells to develop a novel polymer that can improve the efficiency and increase the lifetime of organic solar cells. Exposure to ultraviolet light causes the side chains of elements on the novel BNL-developed polymer to become reactive and bond with each other, cross-linking the polymer, similar to hooking two strands of Velcro® together. With only the side chains, and not the central structure involved, the cross-linked polymer retains the desirable electrical and optical properties of the standard compound.