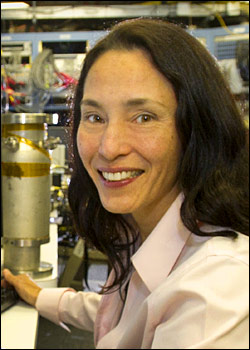 Jump back in time to the birth of the universe, about 13.7 billion years ago. Scientists believe that within a few microseconds of that birth, a hot plasma of quark and gluon particles existed, that cooled and condensed to form all matter — from individual atoms to stars, planets, and people.

Last year, analyses made by scientists in Relativistic Heavy Ion Collider (RHIC) experiments established that collisions of two beams of gold ion particles had produced matter at a temperature of about 4 trillion degrees Celsius. This temperature is higher than the temperature needed to melt protons and neutrons into a plasma of quarks and gluons — like the substance that filled the very early universe. This discovery and others at RHIC have led to new questions in the field of quantum chromodynamics, the theory that describes the smallest known components of the atomic nucleus.

Key to achieving these breakthrough analyses are adjustments of the collider parameters for ultimate performance. The equipment and technologies have been continuously improved to the utmost degree possible — the work of RHIC accelerator scientists, engineers, and technicians over the 10 years of RHIC operations.

To learn about these essential achievements and their impact on RHIC performance, join Physicist Michiko Minty of the Collider Accelerator Department as she gives the 471st Brookhaven Lecture, titled “Keeping RHIC’s Beam Tight and the Orbit Right: Precision Control of Accelerating Beams.” All are welcome to this free talk, which is open to the public and will be held on Wednesday, September 21, at 4 p.m. in Berkner Hall. Visitors to the Lab 16 and older must carry a photo ID. Refreshments will be offered before and after the lecture. To join Minty after the lecture for dinner at a restaurant off site, contact Anna Petway, or Ext. 4776.

As Minty will explain, bunches of particles traveling in opposite directions in each of RHIC’s two superconducting rings are guided, focused, and accelerated to nearly the speed of light and then made to collide. She will describe how to ensure the highest possible collision rates by establishing head-on collisions between the two-foot-long bunches which, at the interaction points, are a width comparable to a human hair. She will also talk about improved measurement precision and how this has allowed the realization of “feedback-based beam control” which has also significantly improved RHIC’s polarized proton program and represents a world’s first in colliders such as RHIC.

Michiko Minty, who earned her Ph.D. in physics in 1991 from Indiana University on the topic of specialized magnets known as Siberian snakes and the related specialty of depolarizing resonances, joined BNL as head of the instrumentation group in March 2008. She held staff appointments at the Stanford Linear Accelerator Center (SLAC), with focus on linear colliders (the SLAC linear collider) and electron-positron colliders (the B-factory producing B-meson particles), and at the Deutsches Elektronen-Synchrotron (DESY) in Hamburg, Germany, where she managed operation of the DESY-2 (lepton particle) and DESY-3 (proton) synchrotrons and worked also on the TESLA Test Facility (a superconducting linear collider with a SASE — self-amplified spontaneous emission — free electron laser), HERA (high energy lepton/hadron collider), and the European X-ray Free Electron Laser project. She has taught at numerous accelerator schools in the U.S., Europe, and Russia and is coauthor of the book titled Measurement and Control of Charged Particle Beams (Springer Verlag, Berlin).