Heavy rain fell on Friday, September 23 — the day that the American Physical Society (APS) recognized Brookhaven National Laboratory as a historic site in the advancement of physics. The planned walking tour was postponed, but members of the Lab community, undaunted by the weather, gathered in Berkner Hall to attend the award ceremony. 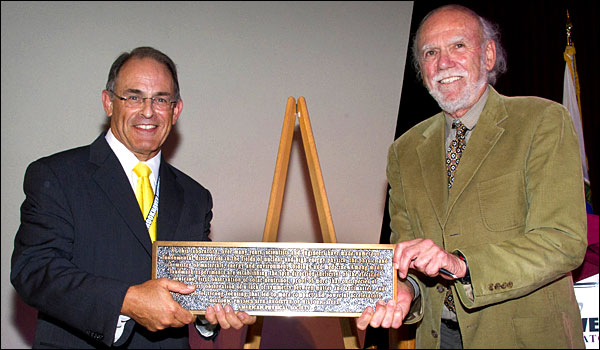 The purpose of the APS Historic Sites initiative is to increase public awareness of physics and physicists’ awareness of important past scientific advances and their place in the historic evolution of their work. Brookhaven is now one of about 20 historic sites designated by the APS, this being the first time an entire national laboratory has received this prestigious recognition.

Robert Crease, BNL historian and Stony Brook University Philosophy Department chair, gave the first talk. “The history of Brookhaven is one of the most important stories of post-World War II science,” said Crease, highlighting some of the important people, facilities, and scientific developments in the evolution of Laboratory during its six-decade+ history.

BNL Senior Physicist Emeritus, former APS Editor-in-Chief, and former BNL Deputy Director Martin Blume spoke next. Blume focused on the story of two Brookhaven scientists: Renate Chasman and Kenneth Green. They developed the Chasman-Green Lattice — an arrangement of magnets that bend, focus and correct an electron beam. This lattice is a critical component for BNL’s National Synchrotron Light Source (NSLS), other light sources around the world, and the future NSLS-II.

“The development of a design expressly for a synchrotron radiation source, with a laboratory staff that could make varied use of it and colleagues in many universities and industrial laboratories, showed the advantage of a multidisciplinary laboratory like Brookhaven,” Blume said.

Nicholas Samios, director of the RIKEN BNL Research Center and former Brookhaven Laboratory director, then discussed physics discoveries and contributions resulting from work done through the Laboratory’s facilities and major programs. “Major programs are important because although you can’t pick one big thing, they greatly add to a body of knowledge,” Samios noted.

With the Tevatron particle collider at FermiLab in Illinois scheduled to shut down during the last week of September, Samios added, “I show a picture of RHIC [Relativistic Heavy Ion Collider] with a little bit of melancholy, because as of next week, it will be the only collider in the United States — a sad thing.”

“Brookhaven is in very, very distinguished company in receiving this award,” said Barry Barish, APS president, when he took to the stage.

To illustrate why the entire Laboratory was recognized as a historic site, not a single location for a single discovery, Barrish discussed six Brookhaven discoveries — the spin direction (helicity) of the electron neutrino, first observation of solar neutrinos, proof of more than one kind of neutrinos, first observation of a lack of symmetry between matter and antimatter, the principle of strong focusing for accelerators, discovery of the omega-minus particle, and co-discovery of the J/psi particle.

APS Editor-in-Chief Gene Sprouse then joined Barrish on stage and together they unveiled a plaque to commemorate the Laboratory’s recognition as a historic site.

After accepting the award, Sam Aronson gave a talk, titled “Our Past is Prelude to Our Future.” Connecting the Laboratory’s expertise and research of its past to the expertise and research of its future, Aronson focused on the Laboratory’s work in nuclear and particle physics, condensed matter physics, life sciences, environmental sciences, and the chain of activities from discovery to deployment.

“An aspect of our work is increasingly to look at how our discoveries here can benefit society and the economy,” Aronson said, concluding the ceremony. “We have a distinguished history, we have impactful ongoing activity, and we have great aspirations for the future.”

Videos of each ceremony speaker's talk is available on the APS Historic Site website.

On October 3 — a little more than a week after the ceremony — 200 employees, guest researchers, and retirees gathered in the parking lot outside Berkner Hall to again celebrate the APS’ recognition of the Laboratory as a historic site in the advancement of physics. Sam Aronson kicked off the postponed walking tour, a 1.6-mile walk through the center of Brookhaven’s site showcasing the facilities where discoveries had been made during the Lab’s renowned history.

This walk also featured an innovation — the Lab’s first-ever audio tour. At every tour stop, walkers with smart phones were able to a scan a barcode to access the recorded audio tour. Those with iPods could also download the audio tour in advance to listen along the way. The audio tour is still available for listening online.

Strategies for the Future

The APS recognition of BNL as a historic site in the advancement of physics is now part of the Laboratory’s history. Learn more about the strategies and initiatives that will lead to BNL’s groundbreaking discoveries of the future.