On Sunday, September 25, 2011, a group of BNLers participated in the “Tunnel to Towers Run” in New York City. 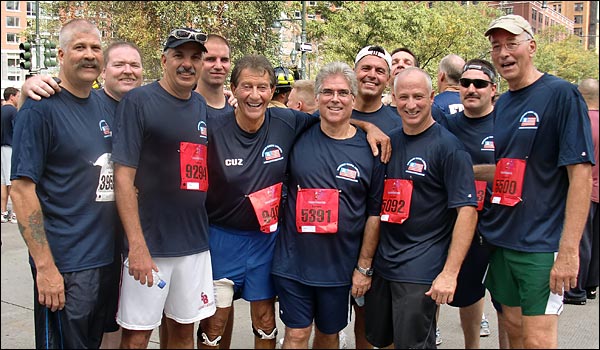 This group of BNLers participated in the 5K “Stephen Siller Tunnel to Towers Run” to raise funds for the pediatric New York City Firefighter Burn Center and burn centers throughout the nation. Stephen Siller was among the 343 New York City firefighters who died on September 11, 2001.

On September 11, 2001, Siller ran this route — through the tunnel to the WTC towers — in full fire department gear to assist his fellow emergency responders. Sadly, Siller was among the 343 FDNY responders who would never return home. 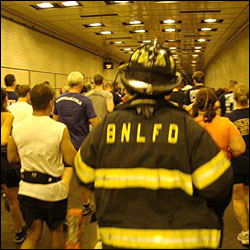 Joining the commemorative Stephen Siller Run is BNL Firefighter James Maire, in full firefighting gear, making his way through the tunnel to the towers.

BNL Fire Captain Marcel Rosenfeld rallied the BNLers to participate in the fundraising event. He also had custom tee shirts designed and arranged transportation to and from the race on a bus generously provided by the Miller Place Fire Department.

“I encourage others to join us next year,” said Rosenfeld. “It’s a worthwhile benefit and despite the sadness that lies behind the purpose, it is a day of camaraderie and fun. It is a celebration of Stephen Siller’s life and the lives of other heroes lost on that tragic day in 2001.”

Monies raised from the event support the pediatric unit of the NYC Firefighter Burn Center and burn centers throughout the nation.