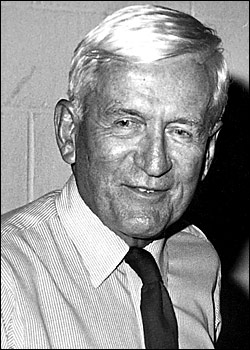 Nobel Prize winner Norman Ramsey, a founder of BNL and the first Chair of the Physics Department, died at the age of 96 on Friday, November 4.

“At Brookhaven, we have a special regard for Norman Ramsey,” said Doon Gibbs, Deputy Lab Director for Science & Technology. “In 1945, I.I. Rabi of Columbia University and Ramsey formulated the idea for a national laboratory in the East, and Ramsey headed the site selection committee. As BNL’s first Physics chair in January 1947 he had a staff of four — now expanded to about 400. He left for Harvard in October 1947, remaining a friend of the Lab, visiting and giving talks as recently as 2001. We shall miss him.”

Ramsey earned a Ph.D. from Columbia University in 1940 and a D.Sc. from Cambridge University in 1964. During World War II, he was associated with the Massachusetts Institute of Technology Radiation Laboratory, where his work on radar earned him the Presidential Order of Merit, and with Los Alamos Scientific Laboratory. As an associate professor at Columbia from 1942 to 1947, he worked with Physics Chair Rabi, 1944 Nobel Laureate in Physics.

As Ramsey recounted in a 1966 Brookhaven Lecture that he gave on how the Lab was started, the discussions that culminated in Brookhaven Lab managed by several universities known as Associated Universities, Inc. (AUI) arose between himself and Rabi in late 1945. Ramsey not only chaired the sub-committee on site selection, but also, with help from his wife, chose the name of Brookhaven Laboratory, hoping to evoke a pastoral setting to attract new recruits. He included the word “National,” he said, to increase the sense of Federal participation and thus improve relations with the Federal Government. The name of Brookhaven National Laboratory was formally announced through a press release on September 28, 1946.

During 1947, when Ramsey chaired BNL Physics, he also began his long association with Harvard University, where he invented a technique to measure the frequencies of electromagnetic radiation most readily absorbed by atoms and molecules, work that led to the development of the atomic clock, and later, to the Nobel Prize. Until 1967, he spent several summers doing research at BNL. For example, he conducted an experiment in 1966 to estimate the electric dipole moment of the neutron, with a view to exploring weak interactions. Ramsey served as an AUI Trustee from 1951 to 1954. He also became a founding Trustee of Universities Research Association (URA), which oversaw Fermi National Accelerator Laboratory, serving as URA President 1966-80.

In 1989, Ramsey was one of three physicists to win the Nobel Prize in Physics for contributions to the development of atomic precision spectroscopy. Specifically, he won one half of the prize, for his invention of the separated oscillatory fields method and its use in the hydrogen maser and other atomic clocks. Among his many other honors were the E.O. Lawrence Award from DOE in 1960, the Davisson-Germer Prize of the American Physical Society in 1974, and the IEEE Medal of Honor in 1984.

Ramsey officially retired from Harvard in 1986, but continued his work through his early 90s. In September 1987, he gave another of his witty and informative Brookhaven Lectures on the early history of the Lab, and he returned on July 26, 2001, to talk on “My Many Memories of Maurice,” at the BNL celebration of the 90th birthday of eminent physicist Maurice Goldhaber, the late former BNL Director.