MAGIC “Cruise” Aboard Spirit Getting Ready to Set Sail 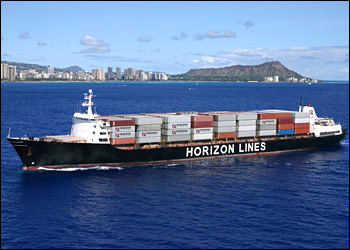 The Horizon Spirit, a 272-meter cargo ship, makes the round trip between Los Angeles and Hawaii every two weeks.

This is not a story about the latest mega cruise ship, with five swimming pools, 10 restaurants, a rock-climbing wall, and a casino. The vessel we’re talking about, the Horizon Spirit*, will be outfitted instead with radars, aerosol sampling devices, and other high-tech tools. But even without the fancy umbrella drinks, Ernie Lewis, an atmospheric scientist at the U.S. Department of Energy’s (DOE) Brookhaven National Laboratory, can’t wait to set sail.

Last month, he and several colleagues traveled to California to visit the Spirit, a cargo carrier owned by Horizon Lines that makes regular runs to and from Hawaii. In January, they’ll embark on a round-trip voyage to investigate how to get the ship ready for a yearlong mission gathering data to improve climate models, a project funded by DOE’s Atmospheric Radiation Measurement (ARM) Climate Research Facility.

“We are extremely grateful to Horizon Lines for providing a platform enabling this deployment to occur — and to DOE for approving the project,” Lewis said.

“Low marine boundary layer clouds over the ocean exert a large influence on Earth’s climate through reflection of sunlight and mediating interactions between air and sea,” Lewis explained. “These clouds are a challenge to global climate models — the computer codes that attempt to describe and predict the climate. The models have difficulty in accurately representing these clouds and the transitions among their different types — stratocumulus, cumulus, and so on.” 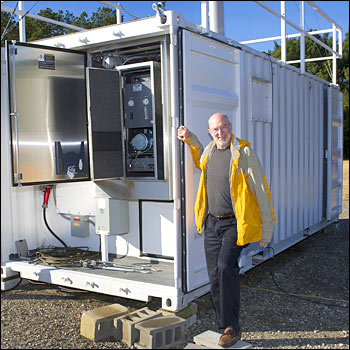 To gather sufficient data to improve the models, Lewis proposed deploying the ARM Facility’s sophisticated scientific instruments aboard a cargo vessel that already plies a route across an area of the Pacific where these cloud-type transitions are an ever-present phenomenon.

“The Spirit makes the round trip from Los Angeles to Hawaii every two weeks, encountering atmospheric conditions that are important to numerous climate models,” Lewis said. “The data we collect over a full year of sampling along this route will therefore provide constraint, validation, and support for these modeling efforts.”

The project — dubbed MAGIC, for the Marine ARM GPCI Investigation of Clouds, where GPCI is a project comparing data from the major climate models — will begin next October and run through September 2013.

Lewis and his team are already working with colleagues from Argonne National Laboratory on a myriad of logistical details. The first step is to determine how the instruments will be installed on the ship.

Some of the instruments are housed in modified 20-foot SeaTainer cargo containers that will be placed on deck. These mobile scientific laboratories, including an aerosol observing system designed by Brookhaven scientists, can be transported and deployed at a range of locations around the globe*. The SeaTainers will be supplemented by smaller modules containing other instruments.

Horizon Spirit’s route from Los Angeles to Hawaii (dashed line) lies adjacent to the GPCI transect that is used to compare climate models (solid line), which also contains specific locations used for other modeling efforts (labeled points). The color scale representing the annual average percentage of low-level cloud cover over the region shows that the route is ideal for assessing the effects of changing cloud conditions.

“We plan to have two radars, one pointing vertically and one scanning continuously while the ship is underway,” Lewis said. “The installation plan must ensure that these radars and other instruments for collecting data on aerosols and other important variables have clear views of the sky — and of the sea surface, for instruments taking remote temperature readings — while at the same time not interfering with Horizon’s activities.”

During a test cruise, dubbed Leg0 of the study, scheduled for January 2012, the team will evaluate travel conditions, measure the ship’s motion, investigate locations for weather balloon launches, and familiarize themselves with ship routines and operation.

“Characterization of the ship’s motion will aid in the construction of so-called ‘stable tables’ designed to allow instruments to remain pointing directly upward as the ship rocks from side to side,” Lewis said.

“Hopefully there will not be much other motion, as I get seasick!” he added.

Once setup is complete, the instruments should operate continuously for the yearlong study. Two technicians will remain on board for the entire cruise, and additional scientific personnel will board for two intensive study periods, one in winter and one in summer, to help gather even more data.

“Collecting data over a full annual cycle will allow us to determine how a wide range of variables change daily and on seasonal scales, as well as their spatial variability — especially the transition between cloud types and coverage that has proven so difficult to capture in climate models,” Lewis said. “These ship-based measurements can provide much more detailed information than can be determined from satellites, and these data will prove a valuable addition to other measurements that have been made in marine conditions, albeit for much shorter periods, for many of these quantities.

“In the end, these data will greatly enhance our understanding of clouds, aerosols, Earth’s energy and water balance, and the interactions among them in the marine environment, providing an unequalled dataset for evaluating and improving climate models.”

The research will be funded by the DOE Office of Science.

*Links to other Brookhaven research on designing/using SeaTainer mobile units:

* UPDATE: According to the latest plan (3/2012), instruments for this study will initially be placed on a different Horizon Lines cargo ship, Reliance, which plies the same L.A.-Honolulu route as Spirit. The instruments will be moved to Spirit when Reliance goes into dry dock for repairs in mid-2013.