The winning artworks were displayed at the annual BNL Employee Art & Crafts Show, also in November. Peter Siddons, a BNL scientist whose recent work at the National Synchrotron Light Source has authenticated a Rembrandt painting, presented the $300 prizes to Maya Cohen of Bellport High School for her photo, “Magnify,” and Makenzie Sullivan of Eastport South Manor High School for her drawing, “Charlie.”

Maya Cohen, who hopes to study at Pratt University and become a professional photographer, works now with art teacher Suzette Fandale at Bellport High School. Cohen’s extremely striking digital photograph, titled “Magnify,” was taken in the street, with Maya holding a water bead in one hand and taking the photo with the other — a feat in itself. She wanted to photograph the tree reflected in the bead, and she succeeded so well that the effect seems simple although original and technically excellent. In addition, the viewer approaches and sees that the tree appears upside down. This photo was chosen for the Discovery prize because the photographer employs the bead as a “tool” using the laws of refraction of light to look at something (the tree) and see it differently, similar to the way in which scientists use tools and the different wavelengths of synchrotron light in the National Synchrotron Light Source at BNL to make discoveries by seeing things differently. 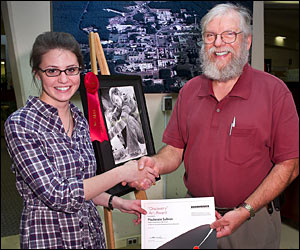 Makenzie Sullivan, whose art teacher at Eastport South Manor High School is Greg Barbara, plans to continue in art as a career. Right now she is applying to several schools, including Brown University. Her superb pencil drawing titled “Charlie” shows a young man half seated who seems suddenly to have seen or realized something that caught his attention. Charlie is brilliantly drawn and seems alive. The artist has skillfully focused the viewer’s attention on the subject’s alert, questioning expression — so intent that you feel he is about to move to check out what he had just noticed. When scientists observe an unusual event or unexpected data in their research, they immediately probe further and sometimes, they make a discovery. This drawing was chosen as a Discovery prize winner because Charlie’s compelling expression of being about to investigate something can be thought of as symbolizing this step in the scientific discovery process.