Brookhaven Lab and the Search for the Higgs 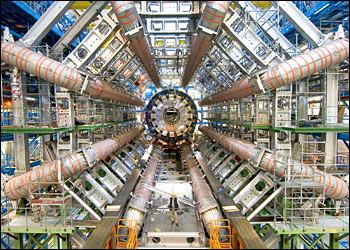 Today's public seminar at CERN, where the ATLAS and CMS collaborations presented the preliminary results of their searches for the Standard Model (SM) Higgs boson with the full dataset collected during 2011, is a landmark for high-energy physics!

The Higgs boson is a still-hypothetical particle postulated in the mid-1960s to complete what is considered the SM of particle interactions. Its role within the SM is to provide other particles with mass. Specifically, the mass of elementary particles is the result of their interaction with the Higgs field. The Higgs boson’s properties are defined in the SM, apart from its mass, which is a free parameter of the theory.

Scientists are looking for signs of the Higgs boson by searching for the products of its decay. Two of the most prominent decay channels, or ways the Higgs can decay, are to form two photons or to form a pair of Z bosons, each of which subsequently decays to a pair of leptons (electrons or muons). Brookhaven National Laboratory (BNL) has played and continues to play a key role in the design, construction, and operation of the detectors of the ATLAS experiment that are used to observe electrons and photons (the liquid argon electromagnetic calorimeter) and muons (the muon spectrometer). Major contributions are also made in the data analysis, where Brookhaven scientists have leading roles. BNL also significantly contributes to the trigger — deciding which events to analyze in detail — and to computing.

Owing to the excellent performance of the Large Hadron Collider (LHC) and the stable operation of the ATLAS and CMS detectors, the two collaborations have achieved a five-fold increase of the dataset presented during the summer conferences, only a few months ago. The new result excludes the vast majority of the range where the Higgs boson mass could potentially lie, and leaves very little hiding space for the elusive boson.

Furthermore, both experiments observed in several channels an intriguing upward fluctuation of the data. Is this the first glimpse of the Higgs boson or just a statistical fluctuation? Only improved analysis, and more data will tell!

Scientists at the LHC look eagerly forward to next year’s LHC run period starting in early spring 2012. If the LHC performance projections work out as expected — and the LHC crew has been very good in keeping promises — we should be able to double the available dataset in time for the summer conferences and have a conclusion on the existence or not of the last missing piece of the Standard Model of particle physics.