Even before the Center for Accelerator Science and Education (CASE) existed, leading accelerator scientists graduated from Stony Brook University with help from mentors at Brookhaven National Laboratory. Now, CASE, a unique joint university-laboratory graduate and post-graduate program focused on the development of the next crop of accelerator scientists and engineers, promises to train even more. 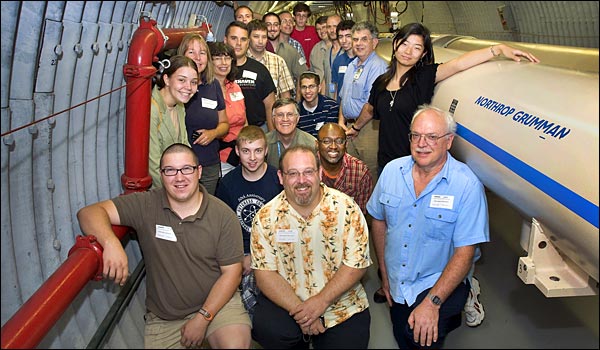 “We’re trying to help create a pipeline for training people for the next generation and beyond,” explained CASE Executive Director and BNL Collider-Accelerator Department Associate Chair for Accelerator Applications and Education Derek Lowenstein. This pipeline was primed by Stony Brook and Brookhaven’s strong partnership, as well as their individual institutional strengths.

“Not every national lab has a university the scale of Stony Brook next door and not every university in the United States has a lab of our scale with such a variety of accelerators,” explained Brookhaven physicist Vladimir Litvinenko, CASE co-director.

With its history of building world-class accelerators and its proximity to Stony Brook, Brookhaven is an ideal location for burgeoning accelerator physicists and engineers to study and train. Brookhaven has 25 operating accelerators, including the Relativistic Heavy Ion Collider, the National Synchrotron Light Source (NSLS), and the soon-to-be-completed NSLS II.

Accelerators are devices that speed up charged particles through the use of electric and magnetic fields, creating a focused beam of particles. These devices are used in a variety of scientific disciplines, ranging from the study of the interactions of accelerated particles themselves as they are accelerated to relativistic speeds and collided, to the use of the intense light energy the accelerator produces as a byproduct to view microscopic structures, such as happens every day at Brookhaven’s NSLS.

With a degree in accelerator science, students will be well prepared to find work in a dynamic and varied technical field ripe with job prospects.

There are approximately 30,000 accelerators worldwide. Of these accelerators, only one percent is used in basic nuclear and particle physics research. Accelerators have become critical to a variety of fields, including radiotherapy, medical imaging, biomedical research and radioisotope production, and widespread commercial use, evidenced by the $3.5 billion per year in the sales of accelerator-related goods.

“There is clearly a national need for accelerator scientists to service all of these areas,” said Lowenstein.

Though the CASE program does center on graduate and post-graduate education, it also offers advanced undergraduate classes at Stony Brook, as well as laboratory work and summer internships at Brookhaven. CASE’s reach also extends to high schools through a summer program for teachers and their students.

Advanced undergraduate and graduate students generally use CASE’s Tandem Van de Graaff accelerator at Stony Brook. Students in an “introduction to research” class in the university’s Women in Science and Engineering (WISE) program, too, get hands-on experience using the accelerator and reporting their results.

Even though it’s an “old school device,” the Tandem reflects all of the principles of an accelerator, Hemmick said.

Later this year, graduate students can look forward to using the Accelerator Test Facility (ATF) at Brookhaven for research. The Physics Department facility will give the students experience in the development of new approaches in particle acceleration.

“In this case, students from Stony Brook can come and really have a good taste of what advanced accelerators are about,” Litvinenko said.

Through the CASE program, Brookhaven accelerator scientists mentor Stony Brook students. Students are encouraged to take the few courses in accelerator science that are offered at Stony Brook and those that are part of the U.S. Particle Accelerator School, which Brookhaven hosted in the summer of 2011. Graduate degrees in accelerator science are granted through SBU’s physics department or the engineering school, depending on the student’s specific field of study. Two students have already graduated from the program, while 10 in the physics department and four in the engineering school are currently pursuing degrees, all of them mentored by Brookhaven staff.

Established in 2009, CASE also aims to bring federal and industrial funding for the expansion of accelerator-centric interdisciplinary research and educational programs. A focal point of CASE’s present accelerator R&D program is the incorporation of state-of-the-art science and engineering and interdisciplinary university R&D with that of Brookhaven. This will be achieved through a few projects, including:

R&D funding is especially important for CASE because it is exclusively supported by grants. Brookhaven’s Ilan Ben-Zvi, CASE’s deputy director for research, has secured a number of grants for CASE and its students, including grants for studies of diamond amplifiers for photocathodes, the development of a photocathode for high-repetition rate light sources, and a high-current superconducting accelerator.

Amid the complexity of accelerator science and the educational organization behind it, for Litvinenko, the key aspect of CASE is the community of young accelerator physicists it’s creating.

“You always would like to have a group of people who are at the same age, who are in the same university, who are working on similar topics, working together as a team,” said Litvinenko. “This is what CASE is about.”