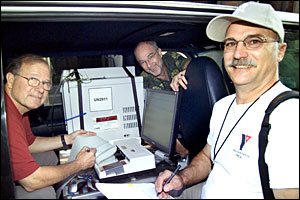 Brookhaven Lab’s perfluorocarbon tracer (PFT) technology can be viewed as a hammer looking for nails. But, according to Tom Watson, leader of the Lab’s Tracer Technology Group in the Environmental Research and Technology Division (ERTD), “It’s a really good hammer!”

The colorless, odorless and safe gases have a number of research uses, from modeling how airborne contaminants might move through urban canyons to help first responders plan their response to potential terrorist attacks and accidents to locating leaks in underground gas pipes. Their extremely low background level — detectable at one part per quadrillion — allows their transport to be easily tracked. Lab researchers used PFTs during the 2005 Urban Dispersion Program field studies in New York City, gathering data to help improve models of how a gas or chemical release might move around Manhattan’s tall buildings and canyons. Closer to home, scientists also used PFTs to make ventilation measurements in Bldg. 400 on the Lab site to provide data to test air flow models used in determining the effects of passive and active air exchange on the levels of indoor and outdoor air pollution, and to determine the effects of an accidental or intentional release of hazardous substances in or around buildings.

Not Everything Is A Nail

In his lecture, Tom Watson will detail many of the research “nails” that Brookhaven Lab scientists have identified on which to use their perfluorocarbon tracer “hammer.” But as he pointed out in a recent article in Environmental Science and Technology, not every problem is a nail.

In the article, titled “Feasibility of a Perfluorocarbon tracer based network to support Monitoring, Verification, and Accounting of Sequestered CO2,” Watson concludes that PFTs would be a poor choice for long-term monitoring of sequestered carbon dioxide.

Carbon capture and sequestration (CCS) will act as a bridging technology necessary to facilitate a transition from fossil fuels to a sustainable energy based economy. The Department of Energy’s target leak rate for sequestration reservoirs is one percent of the total sequestered CO2 over the lifetime of the reservoir, or 0.001% per year for a 1,000 year-lifetime of a storage reservoir.

“Sequestered CO2 has to stay there for thousands of years, and we’ve got to know that it’s going to stay there because it doesn’t do the climate any good if it leaks out,” Watson said. “And if it leaks out at one percent per year, in 100 years most of it is back into the atmosphere and we haven’t gained anything. That’s the issue.”

How can you tell if it’s leaking?

“The ambient background of CO2 is too high and the daily and seasonal variations are too large for you to be able to see a leak,” Watson said. “To detect CO2 leaks effectively at the surface, a tracer tag in the sequestered CO2 may be required.”

Watson calculated how much PFT would be necessary to accomplish this detection, and concluded that “the quantity of PFTs needed for tagging sequestered CO2 is too large to be practical for routine monitoring.”

Tagging at a level that would result in 1.5 times background at a sampler located one kilometer from a leak of 0.01 percent per year would require 625 kg per year of PFT.

“We used grams of PFT in the New York City Urban Dispersion field studies and it worked well,” Watson said. “But if you’re going to tag at a one-part-per-million level and you have 8.6 million tons of CO2 per year coming out of a power plant, you need 8.6 tons of tracer — that’s more than the total atmospheric burden of PFT.”

He pointed out that the utility of PFTs or any other tracer would be lost if the background levels are allowed to rise indiscriminately.

“The reason that PFT is a good hammer is that the background is detectable at parts per quadrillion levels,” Watson said. “That’s the reason that it works so well. It would be a lot harder to use if the large quantities needed for carbon sequestration increased the background levels. A better use of PFTs would be as a tool in sequestration research.”

To learn more about the usefulness and challenges of working with PFTs, join Watson as he gives the 475th Brookhaven Lecture, titled “A Really Good Hammer” on Wednesday, February 15. All are welcome at this free lecture, which is open to the public and will be held at 4 p.m. in Berkner Hall. Refreshments will be served before and after the event. Visitors to the Lab 16 and older must carry a photo ID. To accompany the lecturer to supper at a restaurant off site after the lecture, contact Linda Satalino.

In the lecture, Watson will explain why PFTs are unique tools for quantifying mass transfer in a number of important natural and engineered systems and identify the properties that a good tracer must have. In addition to describing mass transfer and why we study it, he will detail how this tool can be used in research into processes of atmospheric transport and dispersion, the study of building ventilation, and the detection of underground leaks in utility and hazardous waste storage systems. He will explore the future of tracers as a tool and present the plans for future research.

Watson earned a Ph.D. in chemistry from the University of Colorado at Boulder in 1990. Before coming to the Lab in 2005, he served as a program specialist, research chemist and as deputy division director at the National Oceanic and Atmospheric Administration in Washington D.C. and in Idaho Falls, Idaho.

The Lab’s Environmental Research and Technology Division conducts basic and applied research on critical environmental issues including the effects of elevated carbon dioxide and other pollutants, fate and transport of contaminants in air, soil, and water, environmental restoration, and waste treatment. Within the department, the Tracer Technology Group applies PFT technology to scientific and technical questions, works to improve PFT methods and to develop new applications for this unique tool.