This feature about a March 2012 workshop reviewing progress on the Large Synoptic Survey Telescope (LSST) was written by Paul O’Connor, a senior scientist in Brookhaven Lab’s Instrumentation Division. Brookhaven Lab leads the development of the digital sensors for the LSST, the 3200-megapixel array of precise electronics that will allow the telescope to capture images of a wider and deeper volume of space than all previous telescopes combined, offering an unparalleled wide-field astronomical survey of our universe. Further information can be found on the newly launched Brookhaven LSST website. 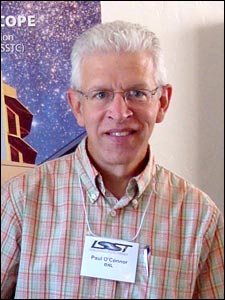 Last week, I joined with nearly 70 collaborators for a workshop at Brookhaven Lab to continue planning and designing the world’s biggest-ever digital camera for the future, Large Synoptic Survey Telescope (LSST).

Some of the most perplexing observations in the cosmos include determining the abundance of unseen dark matter and a recent discovery that the universe is expanding at an accelerating rate because of a force called dark energy that counteracts all matter’s mutual gravitational attraction. These observations, among others, have led scientists to determine that dark energy and dark matter dominate dynamics of the universe, yet neither can be explained within the framework of existing physical theory.

The LSST is a public-private partnership with collaborators from institutions including Brookhaven and other national laboratories, foundations, private companies, and universities. The Department of Energy's Office of Science and the National Science Foundation support experimental research at the cosmic frontier, because physicists use this frontier as a laboratory to explore new fundamental phenomena. 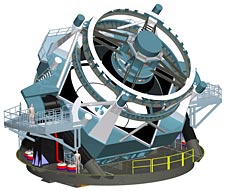 Rendering of the LSST.

The heart of the LSST project is a telescope eight meters in diameter connected to the LSSTCam — the 3,200-megapixel digital camera that we discussed during the workshop last week — for a next-generation survey of the sky. Today, professional photographers’ cameras contain up to about 30 megapixels, so the LSSTCam will be more than 100 times as powerful.

If all goes according to plan, these tools will begin operations by the end of the decade atop the 2,700-meter peak Cerro Pachon in northern Chile. The LSST will take rapid-fire surveys of the entire visible sky twice a week for 10 years to create a movie-like map of the cosmos with unprecedented detail to explore frontiers of space, dark matter, and dark energy, as well as a wide variety of astrophysical investigations.

The LSSTCam working group is developing an entirely new generation of image sensor technologies and electronics to accomplish this task. Much of what we discussed during last week’s workshop focused on interfaces between the subsystems and advancing the design to the next stage.

The next big meeting for LSST collaborators will be an all-hands meeting this August in Tucson, Ariz.

More information about Brookhaven’s role in the LSST collaboration is available on this newly launched website.