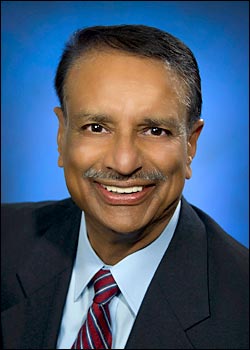 Microbiologist Arokiasamy J. (A.J.) Francis, who retired from the Environmental Sciences Department in 2011, has been named Scientist Emeritus. During his nearly 37 years at Brookhaven National Laboratory, he has concentrated on the realm of microbial interactions with organic and inorganic contaminants — and their remediation. Francis’ investigations have ranged from nitrogen cycling and the control of nitrate pollution to the transformation of radioactive contaminants in the environment. The latter became his primary research focus, taking shape in many different projects, including his groundbreaking work with the use of citric acid to sequester uranium from contaminated soils, wastes and materials.

Francis attributes the breadth of his work to Brookhaven’s unique facilities and collaborative environment. As he explained, having the National Synchrotron Light Source nearby was key to his research, because the sensitive samples he was investigating would not survive long travels to distant facilities to be properly evaluated.

“I really thank Brookhaven for giving me the opportunity to grow professionally,” said Francis. “I was pleasantly surprised to be awarded the emeritus distinction. It’s a great honor.”

Francis’ expertise in his field has taken him around the world to conduct a variety of studies. In India, he investigated the biotransformation of thorium. He has been a frequent invited speaker at international conferences dealing with the biotransformation of actinides and radioactive wastes in particular. He is a member of the Scientific Advisory Committee — International Conference on Uranium Mining and Hydrogeology, in Freiberg, Germany. His travels continue, as he now begins his four-month term as a World Class University visiting professor in the Division of Advanced Nuclear Engineering at Pohang University of Science and Technology in Pohang, South Korea. There, he will teach a graduate course and guide post-doctoral and graduate student research. He has also been invited to give a talk at the Biological, Environmental and Nuclear Speciation Seminar, in Montpellier, France in May.

Francis first came to Brookhaven in 1975 as a microbiologist on a project to remove nitrate from wastewater and prevent ground and surface water contamination. The project’s funding was not renewed, but Francis found his footing in a new realm of interest, in which he studied how microbes transformed radionuclides and toxic materials found in nuclear energy and fossil-fuel wastes.

For over 30 years, he has investigated the biochemical and molecular effects of microbes on the radionuclides uranium, plutonium and technetium, and on the toxic metals lead, cadmium, nickel, and zinc. Francis’s studies have included:

“I think the work really put Brookhaven on the world map in terms of microbiological studies with the radionuclides, radioactive waste, and microbial gas generation from low- and intermediate-level radioactive wastes,” said Francis.

As a prominent voice in the field, Francis has been a grant proposal reviewer for Department of Energy programs, the National Science Foundation, and the U.S. Department of Agriculture.

Francis’ research has yielded four patented processes, two used by industry for lead decontamination: one for the dissolution of lead oxide, and another for the separation and recovery of lead and metals co-precipitated with iron oxides.

Francis’ two other patents are of particular interest because they allow radionuclides and toxic metals in radioactive waste to be stabilized or recovered for reuse or disposal.

One of these patented techniques, which treats uranium and toxic-metal contaminated sediment and sludge, depends on the activities of a Clostridium species, an anaerobic bacterium commonly found in soils and wastes. Clostridium removes a large fraction of soluble non-toxic metals, like calcium, potassium, magnesium, manganese, sodium, and iron from the waste. Clostridium also stabilizes the radionuclides and toxic metals cadmium, chromium, copper, nickel, lead, uranium and zinc. Eventually, the radionuclides and toxic metal, now in a more stable form, can be recovered, recycled and disposed of. One of Francis’ more recent projects has focused on the use of Clostridium to create the alternative fuels ethanol and butanol from plant biomass, after pretreatment with ionic liquid salts.

Francis’ most renowned patent is for a procedure that simultaneously enables the reclamation of soil and recovery of radionuclides and toxic metals using citric acid, an agent that binds to the contaminants. The citric acid extract is then degraded by microbes to recover the toxic metals, followed by the photodegradation (degradation by light) of the uranium citrate complex, which is not biologically altered. This work was based on a paper published in Nature in 1992, and was patented in 1994.

“This patent is for an environmentally friendly green process that uses a naturally occurring organic compound, soil bacteria, and sunlight. It has several applications because it can be used on a number of waste materials. Mixed waste is separated into radioactive and hazardous waste, uranium is separated from toxic metals and recovered for recycling or disposal, all while not generating secondary waste,” explained Francis. “The method causes little soil damage and environmentally and economically important metals are removed in a concentrated form.”

The process is used to remove and recover lead and toxic metals from municipal solid waste, incinerator ash and soils, to remediate soils contaminated with lead paint, and to decontaminate metallic surfaces that have been slightly contaminated by radionuclides.

Francis earned a B.Sc. in Agriculture and a M.Sc. in Soil Microbiology from Annamalai University, India, in 1963 and 1965, respectively. He went on to earn his Ph.D. in Microbiology at Cornell University in 1971. While at Cornell, Francis researched symbiotic nitrogen fixation in legumes. As a post-doctoral researcher there, he was involved in the development of a life detection system of microbial metabolites, which was supported by NASA for the Mars Viking Project. Before coming to BNL, Francis worked as a microbiologist at the Stanford Research Institute. There, he participated in studies on the microbiological degradation of military standard pesticides, including DDT, 2,4,5-T, and lindane, for the Department of Defense.

Francis is a member of the American Chemical Society, the Korean Nuclear Society and the American Society for Microbiology, from which he recently received a certificate in recognition of his outstanding service as an online mentor of the ASM Minority Mentoring Program. He was a scientific advisor and Class-I visiting researcher for the Heavy Element Microbiology Group at the Advanced Science Research Center in the Japan Atomic Energy Agency in Tokai, Japan, and has consulted with United Nations organizations and a number of governmental and commercial groups.