In Brookhaven’s present and future, the very green ERL is poised to play a prominent role individually and as a support for larger scientific accelerators 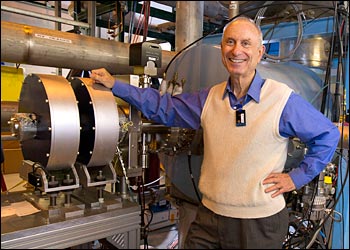 Particle accelerators are hardly known for their minimal energy requirements. But by the end of 2013, BNL’s Collider-Accelerator Department (C-AD) will have completed an Energy Recovery Linear Accelerator (ERL), a unique type of accelerator that reclaims the energy it uses to accelerate electrons.

An ERL, like many linear accelerators, produces a dense particle beam with high brightness, or high-density packing in multi-dimensional space. This beam is created by an electron-producing photo-cathode, and is then injected into a superconducting radio frequency cavity to accelerate the beam from its initial energy. In a traditional linear accelerator, also called a LINAC, this beam would be accelerated and strike a target, while the abundant leftover electrons and all of their energy would be subsequently absorbed in a massive beam dump.

“If the current and energy of the LINAC are very high, it means that you are wasting a lot of power,” said Ilan Ben-Zvi, head of C-AD’s Accelerator R&D division and leader of the ERL project.

An ERL avoids the waste of dumping a fully energized beam. In a simple ERL, the beam is injected into a superconducting accelerator. Once the beam is used, typically having been circulated around a ring with the help of magnets, its energy can be recovered by using the same superconducting cavities to decelerate the leftover beam electrons before they are dumped. In a complex, high-energy ERL, the beam circulates multiple times among a series of accelerators, each of which is specifically phased to elevate the beam to an incrementally higher energy. By passing the beam multiple times through these accelerator sections — the number of times depends on the ERL’s desired maximum energy — a highly energized beam can be generated without requiring a high initial energy from the beam injector. Thus, significantly less energy is needed up-front to create the beam. The complex ERL follows the same beam deceleration process after the beam’s use, saving a substantial amount of energy.

This level of energy conservation is more typically found in storage rings, which circulate a beam of particles for long periods of time without losing much energy. In storage rings, however, beam brightness is determined by an equilibrium process balancing synchrotron radiation — a byproduct of particle acceleration that causes beam energy loss — with the continual add-back of energy from the beam passing through the accelerating cavities on each turn around the ring. The beam brightness from a good electron gun can be higher.

“The great advantage of an ERL is that it allows you to maintain the beam quality of a straight LINAC but maintain current and energy as storage rings do, so it combines sort of the best of all worlds,” said Ben-Zvi.

An ERL’s energy efficiency is also due to the presence of superconducting radio frequency cavities in the accelerators, a technology that is fundamental to modern accelerators. Superconducting cavities allow the generation of large accelerating fields with a miniscule investment of power. The cavities can serve multiple purposes — accelerating the beam, maintaining the beam bunch sizes, and also making up for the energy lost to synchrotron radiation. The cavities, crafted from niobium and maintained at about two degrees Kelvin, are able to carry current with extremely low resistance, thereby minimizing energy loss and reducing the cost of using such accelerators.

The soon-to-be-completed, small-scale, .02-billion-electron-volt (GeV) single-pass ERL is the first of its kind at BNL. But in a decade or so, a powerful multi-pass, up-to-30-GeV ERL could be a key electron source for an electron-ion collider, such as the one proposed for construction at the Relativistic Heavy Ion Collider, known as eRHIC.

“If eRHIC is to be a success, it needs the ERLs and, therefore, ERLs are very much part of the future of Brookhaven,” explained Ben-Zvi. “What we’re trying to create is an Energy Recovery LINAC much, much more powerful than anything that exists or is even planned anywhere.”

The ERL technology might also be applied to another accelerator project designed to “cool” RHIC’s ions and protons. This cooling condenses the beam, which then produces more luminous collisions — and more data.

“As part of my work on eRHIC, I realized that the luminosity would be much improved if you used electron cooling at RHIC,” said Ben-Zvi. “And electron cooling would also require an ERL. So the ERL was just everywhere in this machine. There are multiple applications in many fields of science for such a device.”