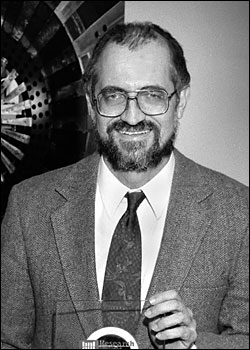 On Thursday, March 1, at 3:30 p.m. in the Hamilton Seminar Room in the Chemistry Department (Bldg. 555), Professor Jürgen Schaffner-Bielich of Heidelberg University, Germany, will give the Carl Dover Memorial Lecture, titled “Exploring Strange Matters.” His lecture will include an overview of possible dibaryon candidates, their possible decay patterns, and how to detect them in heavy-ion collisions. He will also discuss strange hadronic matter, a topic he worked on with Carl Dover during the time of his Ph.D. thesis. All are welcome.

Carl Dover was a senior physicist, the Leader of the Nuclear Theory Group in the Physics Department and an international hypernuclei authority, who died in 1996. Dover, who earned his Ph.D. at the Massachusetts Institute of Technology in 1967, joined BNL in 1971. A recipient of the Senior Science Fellowship from the Alexander von Humbolt Foundation in 1988, he won BNL’s highest honor, the Distinguished Research and Development Award, in 1995. In 1993, he was elected Chairman of the Nuclear Physics Division of the American Physical Society.

Dover’s main body of work focused on hypernuclear physics, the study of nuclei containing hyperons, for which he was cited in a report by the National Nuclear Physics Review Panel as “the intellectual leader in the theory community for hypernuclear and other strangeness-related physics.” Beginning in the 1980s, his research centered on higher energy collisions with heavy ions, including strangelet searches. Among his other fundamental contributions were pioneering work on the theory of pion interactions with nuclei, studies of the mechanisms of proton-antiproton annihilation, and investigations of baryon number nonconserving processes in the nucleus.