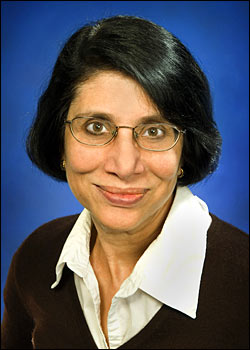 Triveni Rao, a senior physicist at the U.S. Department of Energy’s Brookhaven National Laboratory, will be honored for her scientific accomplishments at Brookhaven Town’s 26th Annual Women’s Recognition Night on March 22 at 7 p.m. at Town Hall in Farmingville. She will be among the 12 women honored for their contributions to a variety of fields in a public ceremony that celebrates the significant achievements of local women during Women’s History Month.

Rao, the head of the Laser Applications Group in the Instrumentation Division, is developing new lasers and photocathodes for critical experimental programs in accelerator technology and materials science.

“I am honored to be recognized by the town of Brookhaven for my work,” said Rao, who is internationally recognized for her research and development on photocathodes for high brightness electron beams. She has contributed significantly in the field of interaction of high intensity short laser pulse with matter, and characterization of ultra short laser pulse and electron beams.

Rao is a pioneer in the subject of metal photocathodes, which release electrons when struck by light, and are fundamental to a number of electron accelerator facilities at Brookhaven and around the world. Rao’s research focuses on measuring and improving electron production and extending the lifetime of the cathode materials. To create high brightness injectors for accelerators, Rao recommended copper and magnesium as suitable cathodes. She developed a processing technique that improves the yield of metal photocathodes by a hundred to a thousandfold. Rao is also investigating the use of diamonds to increase electron yield by a hundredfold.

Rao received her Ph.D. in physics from the University of Illinois in 1983. After working at Quantronix Corporation for a year, she joined Brookhaven Lab in 1985 as an assistant physicist. She rose to associate physicist and physicist positions in 1987 and 1990, respectively. Rao, who was named a Fellow of the American Physical Society in 2009, is a tenured physicist at Brookhaven.