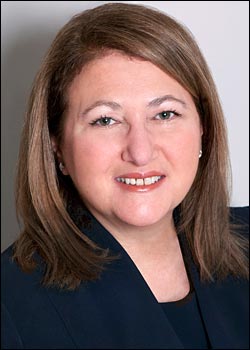 Ellen Pikitch, executive director of the Institute for Ocean Conservation Science and Stony Brook University School of Marine and Atmospheric Sciences professor, will deliver a BSA Distinguished Lecture, titled “Starving the Ocean: Why We Should Leave Small Fish in the Sea,” at the U.S. Department of Energy's Brookhaven National Laboratory on Tuesday, April 17, at 4 p.m. in Berkner Hall. BSA Distinguished Lectures are sponsored by Brookhaven Science Associates, the company that manages Brookhaven Lab, to bring topics of general interest before the Laboratory community and the public. The lecture is free and open to the public. Visitors to the Laboratory 16 and older must bring a photo ID.

Pikitch will discuss the plight of small schooling fish, such as anchovy, herring, sardine, and menhaden, which, in spite of their petite size, play a big role in the life of the ocean. Often referred to as “forage fish,” these tiny species are a key food source for marine mammals, seabirds, and other fish. Forage fish are also a vital food for non-marine life – namely humans. Currently, more than one of every three fish caught globally is a forage fish. And as demand and price grow, these fish populations shrink. By removing this key link in the food chain, marine life on the whole could be significantly disturbed. Pikitch will address the consequences that the massive removal of these small fish have on the survival and health of other ocean life, and the economic value of forage fish both in and out of the water. 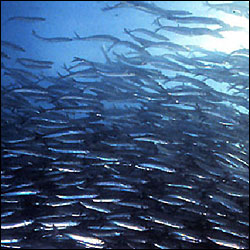 A school of Atlantic herring.

An internationally known expert in ocean conservation science and management, Pikitch has focused her research on ecosystem-based fishery management, the assessment of fish stocks, and the management of bycatch. Pikitch’s work has informed environmental policy decisions, such as the listing of beluga sturgeon as threatened with extinction under the U.S. Endangered Species Act, the passage of the U.S. Shark Finning Prohibition Act of 2000, and, under the Convention on International Trade in Endangered Species, the regulation of the international trade in great white sharks.

From 2000 to 2003, Pikitch was the recipient of the Pew Fellowship in Marine Conservation. Today, she is on the fellowship’s advisory board. Pikitch co-founded and, from 2000 to 2007, was lead scientist of Caviar Emptor, a program that promotes the recovery of sturgeon and increased consumer awareness of the problems facing sturgeon and other fish. This program contributed to the beluga sturgeon’s listing under the U.S. Endangered Species Act in 2004. The U.S. import of beluga sturgeon products was banned in 2005 and the worldwide trade in sturgeon caviar of all species was halted by the Convention on International Trade in Endangered Species in January 2006. For its efforts to raise awareness, Caviar Emptor was recognized with the 2004 Silver Anvil Award by the Public Relations Society of America, and the Wilmer Shields Rich Award by the Council on Foundations for Excellence in Public Communication. Pikitch also holds leadership roles in a number of other organizations, like Shark Savers, the IUCN Sturgeon Specialist Group, and Lenfest Forage Fish Task Force, which recently released a report on the overfishing of forage fish and their value to other marine life as a food source. She is on the editorial board of Conservation magazine.

Pikitch earned her B.S. and M.A. in Mathematics from City College of New York in 1977 and her M.S. and Ph.D. in Zoology from Indiana University in 1982 and 1983, respectively.